VILNIUS (Lithuania) - Lithuanian basketball is dominated by two superpowers: Rytas Vilnius and Zalgiris Kaunas. Rytas hold many advantages in terms of youth development. Yet, one of the ever-present challenges remains attracting and keeping top youngsters in the country's capital.

Either Rytas or Zalgiris have won all 28 of the Lithuanian LKL league crowns since 1993 - 23 of them going to Zalgiris, who have never finished worse than runners-up. Rytas, which was established in 1997, own five titles and were second to Zalgiris 15 times, including the last four seasons.

Every game between Zalgiris and Rytas is a fierce battle - whether it's the pro team or a match-up of youth sides. While Zalgiris get a majority of the wins on the court, the battle off the court for the best youth in the country is much more even.

"Lithuania is not a really big country and we need to bring out the best quality from the limited number of young players," said Darius Gudelis, Rytas' chairman of the board. "We have a deep tradition of basketball and a good level of coaches for children, but we face competition in attracting the most talented players which pushes us towards improvements as well. Therefore, as a club, we must be creative in building a youth development system, which young basketball players would consider as the best one for their long-term future."

Gudelis continued: "So from this perspective, we try to look more at our side and improve what we have already created day after day."

Rytas sports director Donatas Zavackas said one selling point for all teams - including his - is past stars to come through their program.

"Everybody wants to say their top guys came from their club - like Jonas Valanciunas from Rytas. This is the name, the brand, the tag that we can always carry. This is a small country and the others also want to show that they are producing the best young players too," Zavackas said.

Sure, Rytas will lose an occasional talent who leaves for Kaunas - one notable example being the 2001-born Marek Blazevic; but youngsters coming up in the Zalgiris system have also made their way north to the capital.

Martynas Echodas, for example, came to Rytas in 2017 after he had been sent for one season on loan from Zalgiris to Siauliai. The 2003-born Rokas Jocius grew up in the Zalgiris system and came to Rytas in 2020, while 2004-born Laurynas Klimas followed the same path the same summer.

"With youth basketball, if the kid is from Vilnius most likely he will try to stay in Vilnius. But there are some exceptions to this rule. It's hard to tell where your heart lies," Zavackas said.

Zalgiris' history of being established in the 1940s and winning so much helps their cause. But Zavackas believes Rytas is making up ground. 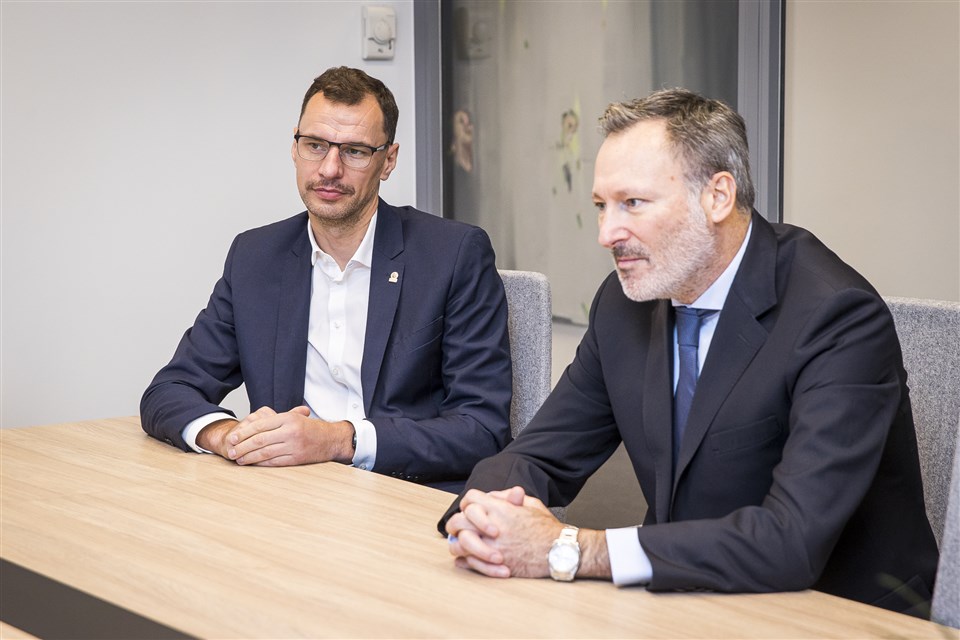 "We are making steps and good progress. Our main goal is to be a solid club. We are already one of the best in Lithuania, and we don't want to just compete with Zalgiris but in the future also with some other bigger European clubs," said Zavackas, who played for Rytas from 2008 to 2010 and took over as sports director in January 2021. "I know it's not an easy thing to do, but it's our goal."

One of the biggest advantages Rytas has over Zalgiris and other clubs in the country is Vilnius being the largest city in Lithuania with about 550,000 people, compared to 375,000 in Kaunas and 190,000 in the third-largest city Klaipeda. The capital also is home to the two largest academies in the country: The Vilnius Basketball School and the Sostines Basketball School. Those two schools - which has players up to 18 years of age - have been winning most of the youth leagues in the younger age groups in the country.

"They produce the majority of players - not just for our program but a lot of those kids will go other places as well. Sometimes we might miss somebody and they could go to another club," Zavackas said. "Rytas' youth program tries to combine those schools and add them into our club. They prepare all the younger players and we oversee the development for the future."

Zavackas said he was satisfied with Rytas' youth development set-up when he arrived at the club.

"We have had this program about 15 years since I was a player already. There was the junior team and a lot of good players came through that team - guys who played for Rytas and other clubs," said Zavackas. "I see a lot of good things that are still there - coaching and organizations continuing to work to raise Rytas players to the pro team, the national team and other European competitions. This is what we are trying to do. I think we are pretty successful in that."

Rytas have three main teams. The pro team plays in the top flight LKL as well as the Basketball Champions League. The second team with the club's youngsters called Perlas Energija competes in the second division NKL, also a national league. The third team - Rytas' second youth team - competes in the so-called Lithuania Regional League RKL with players mainly aged between 14 and 17 years. The Perlas team has access to all the same facilities as the Rytas pro team and some players practice with the LKL side. Perlas also play their games in the main Jeep Arena, where Rytas plays in the LKL.

"I believe that we have a clearly structured and so far well-functioning youth development structure," Gudelis said.

The club has changed its philosophy a bit with the Perlas second team to institute a soft age limit of 21, 22 years.

"We want to give young kids more playing time so they will be comfortable and it will be an easier transition to the pro team," Zavackas said.

The sports director urged that the Lithuanian second division is not an easy level for the youngsters.

"Our results this year are not very good. We still have to stay in the league with the young players," said Zavackas, referring to the Perlas team currently ranking last in the 14-team league with a 3-11 record. "We are fighting with young players against older players. There is the possibility that we won't win a lot of games. In my opinion it's not about winning for the younger players. Of course we want to win every game but this is more how they can deal with the stress, how to deal with things when they aren't going that well. You go to the main team and it’s the same situation."

One annual highlight for Rytas' youth team is the pan-continental Adidas Next Generation Tournament. Rytas has claimed the trophy of the U18 event twice since it started in 2003. In 2011-12, the team was anchored by Edvinas Seskus, Augustinas Jankaitis and Denis Krestinin. The second crown came in 2017-18, when the team was led by Deividas Sirvydis, Marek Blazevic, Azuolas Tubelis, Domantas Vilys and Augustas Marciulionis.

"The results of the last few years show that we are moving in the right direction," Gudelis remarked. "The development of young players is a rather dynamic part of basketball, so it is natural that we are still looking for the most appropriate model that can provide the greatest benefits. We analyze our mistakes, try to understand where and what we can do better to create a youth system that can grow not only good basketball players, but also personalities - fighters, who know what kind of club and colours they are defending."

The aforementioned Tubelis and Marciulionis meanwhile represent another challenge facing not only Rytas but clubs all over the continent. Both players - along with Tubelis' twin brother Tautvilas - came up in the Rytas system but are playing this season for colleges in the United States. The Tubelis brothers are spending their second season with the University of Arizona  while Marciulionis is debuting in 2021-22 with the University of St. Mary's College in California.

"We are not necessarily losing them. They are choosing a different path. This is a global market and we are competing with everybody," said Zavackas, who arrived last season and experienced the second half of 2020-21 with Marciulionis.

The son of the legendary Sarunas Marciulionis, Augustas played in the BCL last season and was a major producer for Rytas' pro team. Azuolas Tubelis most likely would have been as well if he had been in Lithuania last season. Zavackas remarked that seeing those two talents leave has sparked much thought in the club.

"Maybe we didn't do something to convince the guys to stay here," Zavackas said. "Our goal maybe should be in the next years to figure out what we can do better, what we can offer better so that those kids would stay in Vilnius. This way we don't have to compete with other schools. If they left, that means they saw a better possibility, a better structure or something else."

Zavackas said he communicated to Marciulionis as well as the Tubelis brothers that they are welcome to return to Rytas if for some reason things don't work out for them in the United States.

"We still have to continue to build the relationship with the guys - just watch their progress and hope maybe one day they come back to our team and be happy to see them again."

And hopefully not see them again while playing for a team like Zalgiris Kaunas - an ever-present consideration lingering in the special world of Lithuanian basketball.