TREVISO (Italy) - Nutribullet Treviso are one of the surprise packages of the new season, climbing to 2-0, taking down AEK and VEF Riga. With two games under his belt, Henry Sims is already looking like an MVP candidate.

The 31-year-old center averaged 25.5 points, 9.5 rebounds and 3.0 blocks over the first two games, and his second game against AEK was the second most efficient game in the history of the Basketball Champions League.

The efficiency stat said 44 for Sims after he picked up 31 points, 13 rebounds, 4 steals and 4 blocks against AEK. In Athens, too, spoiling the opening of the new arena for the 2018 champions...

Only Steven Gray managed to pick up a bigger number in efficiency. The shooting guard played for Peristeri against Rytas Vilnius when he had 47 in efficiency, a stat which simply put adds all the good numbers and takes points away for negative stats like missed shots and turnovers.

Sims did a lot of his damage against AEK in the low post.

"I take a lot of pride down there on that block. Everybody that knows me and knows my game knows that's my money maker. The moment I stepped on the court as a child, being on the block was the biggest part of my game," Sims told us in his breakdown.

"That right there is just a small example of the footwork I put in during the summer, of me just being aggressive, the coach believing in me, my teammates believing in me...and me doing what I have to do." Sims also dominated the other painted area on the court with 4 blocks to his name.

"You know you can beat me off the dribble all you want, but you still gotta meet me at the rim at the end of the day! I started off with two blocks, back to back. It felt good! It felt like my legs are there today, which is great. You know, my job is to protect the rim. We play so hard defensively and I'm kind of the last line in defense. And I take pride in being able to be that for the guys," Nutribullet Treviso center explained.

He praised his teammates for making his life easier, especially the pick-and-roll master Tomas Dimsa, who dished out 11 assists on the night.

"Gotta be a career-high for him!" Sims laughed.

Two games in, and Treviso are looking like the team to beat in their group. The fact that coach Massimiliano Menetti's men went through the Qualifying Rounds, and played the Italian Super Cup before the Regular Season even began made them gel together already in October.

Consider winning in Athens a statement - Nutribullet want to bring the glory days back to PalaVerde in Treviso. No wonder Sims was in a good mood after a win over AEK.

"I'm just proud of the guys, we came out, we got a win. A road win! Tough travel, they had me sitting in the middle seat. It's not the easiest. We got back, got the win. I couldn't be more proud of my guys," he concluded. 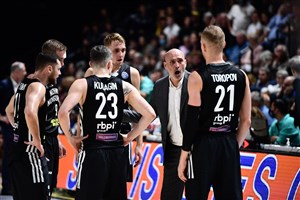 Lukic trying to copy-paste the Nizhny Novgorod model with Russia