Yellow 10 receives the ball and attempts a 3-point jump shot. After the ball is released, the referee calls a personal foul to Blue 7.

Article 33.6: A player who has jumped into the air from a place on the playing court has the right to land again at the same place.

Outcome: Correct decision from the referees. Blue 7 occupied the landing spot of an airborne shooter, taking the place on the playing court from where the airborne shooter took off. 3 points for Yellow 10 plus he is awarded 1 free throw.

Black 12 drives to basket for a lay-up and White 30 tries to block the shot, hitting the backboard. There is no call from the referees and the White Team get the rebound.

Article 25.2.1    To start a dribble, the pivot foot may not be lifted before the ball is released from the hand(s).

Outcome: Incorrect decision from the referees. First, Black 12 lifted his pivot foot (right foot) before releasing the ball to start his dribble. This is a travelling violation that should have been called.

White 30 hit the backboard in such a way that he caused the basket to vibrate when the ball still had an opportunity to enter the basket. This is a basket interference, and 2 points should have been awarded to Black 12.

Yellow 9 attempts a lay-up and the shot is blocked by Blue 23. The referees call a goaltending violation.

Outcome: Correct decision from the referees. The ball had already touched the backboard and was completely above the level of the ring when Blue 23 blocked it. Yellow 9 was correctly awarded 2 points. Tuesday Quarter-Finals preview: How many of the three series will end in a sweep? 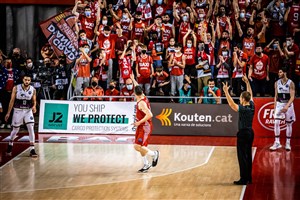