Tough Call 1: AEK vs Falco Szombathely - Control of the Act of Shooting

Yellow 17 attempts a 3-point jump shot. After the ball is released, the referee calls a personal foul to Black 24.

Outcome: Correct decision from the referees. Black 24 occupied a place on the playing court that was free when the shooter jumped for the shot. Therefore Black 24 is responsible from creating an illegal contact with the shooter during the shooter’s landing. Yellow 17 will be awarded 3 free throws.

Purple 1 goes for a lay-up. The ball is bouncing over the rim when the referees call a basketball interference violation and award 2 points to the Purple team.

Outcome: Correct decision from the referees. White 11 grabbed the rim and the basket moved in such a way that the ball was prevented from entering the basket. 2 points shall be awarded to Purple 1.

Article 31.2.1     Goaltending occurs during a shot for a field goal when a player touches the ball while it is completely above the level of the ring and:

Outcome: Correct decision from the referees. The ball is on its downward flight to the basket, so the basket counts, and 1 free throw is awarded to Blue 33 for the personal foul. 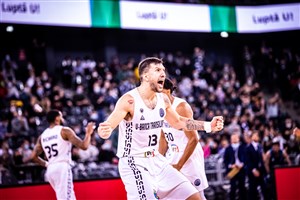 Too close to call: No locks in Group G even after five Gamedays 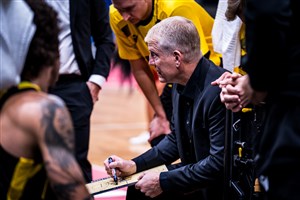