Yellow 33 drives to basket when a contact occurs. The referee calls a personal foul on Black 2 and makes the decision that Yellow 33 had already started his act of shooting.

Article 47.3 When deciding on a personal contact or violation, the referees shall, in each instance, have regard for the following fundamental principles:

Outcome: Incorrect decision from the referees. Regarding basketball knowledge and the principle of advantage/disadvantage, the contact created by Black 2 doesn't have any effect on the dribbler's freedom of movement, speed, balance or quickness and no foul should have been called.

Red 9 drives to the basket and tries to make a lay-up. Help defender Blue 77 jumps, a contact occurs and the referee calls a personal foul to Blue 77 for hitting on the shooter’s head.

Article 33.1 - The cylinder principle is defined as the space within an imaginary cylinder occupied by a player on the floor.

Outcome: Correct decision from the referees. Blue 77 had his arms extended above him but he created an illegal contact jumping towards the shooter (leaving his cylinder). However, the signal was not correct as the defender didn’t hit the shooter on his head.

White 35 receives the ball under the basket and attempts a field goal. Blue 3 jumps to block the shot and creates an illegal contact on the shooter. The referees call a personal foul and after reviewing the IRS, they upgrade the foul to unsportsmanlike foul.

Article 37.1.1 An unsportsmanlike foul is a player contact which, in the judgment of a referee is:

Outcome: Incorrect decision from the referees. Blue 3 created an illegal contact with his hands in his attempt to block the shot, but the contact was not excessive or hard and can be considered a normal basketball play. A personal foul should have been called on Blue 3 and 2 free throws awarded to White 35.

The Black team takes a throw-in from the opponents’ baseline. Black 24 receives the ball and the referees call a foul in the act of shooting on White 11. Then, White 1 touches the ball.

Article31.2.3 The goaltending restrictions apply until

All restrictions related to goaltending and interference shall apply.

Outcome: Correct decision from the referees. After calling the foul, they met to decide if,

As all three conditions were met, the basket was valid, 2 points were awarded to Black 24 plus an additional free throw.

During the last 2 minutes of the fourth quarter, the ball leaves the court and the referee give the ball to the White team for a throw-in.

F 3.3      The following game situations may be reviewed when the game clock shows 2:00 minutes or less in the fourth quarter and in each overtime:

Outcome: Correct decision from the referees. The ball touched Blue 6, who was out-of-bounds, so the White team is awarded a throw-in from the place closest to where the infraction occurred. 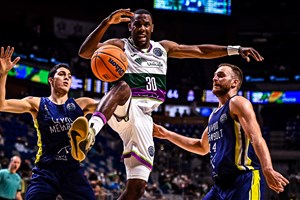