White 0 receives a pass while airborne. Black 35 moves backwards and creates an illegal contact invading the cylinder of the airborne player. The referees call a foul in the act of shooting to Black 35, the basket is valid and White 0 is awarded 1 free throw.

Article 33.6: “Moving under a player who is in the air and causing contact is usually an unsportsmanlike foul and in certain circumstances may be a disqualifying foul”

Article 37: “An unsportsmanlike foul is a player contact foul which, in the judgement of a referee is:

The White team steal the ball and start a fastbreak. White 23 receives a pass and makes a lay-up. There is no call from the referees, who award the basket.

Article 25.2.1: “A player who catches the ball while he is progressing, or upon completion of a dribble, may take two steps in coming to a stop, passing or shooting the ball.

The first step occurs when one foot or both feet touch the floor AFTER gaining control of the ball.

The second step occurs after the first step when the other foot touches the floor or both feet touch the floor simultaneously.

Tough Call 3: Falco Szombathely vs AEK - Illegal use of arms

Yellow 7 is dribbling the ball while Yellow 17 tries to set a screen for his teammate Yellow 11. Yellow 11 is being guarded by Black 11. When Black 11 passes the screener, he raises his left arm and pushes off the opponent’s arm.

Article 33.15: “Holding is illegal personal contact with an opponent that interferes with his freedom of movement. This contact can occur with any part of the body.”

Outcome: Correct decision from the referees. The contact created by Yellow 11 is illegal and a team control foul was correctly called.

Article 25.2.1: “To start a dribble, the pivot foot may not be lifted before the ball is released from the hand(s).

Outcome: Incorrect decision from the referees. The right foot is the pivot foot and Yellow 12 released the ball to start his dribble before lifting his pivot foot. 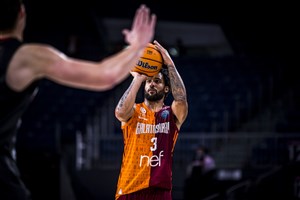