BILBAO (Spain) - It's rare that the box score tells a succinct version of a game story and, of course, there is always some extra nuance because this is basketball. But if you do know the context behind the way that MHP Riesen Ludwigsburg and BAXI Manresa play, then you will know that it doesn't happen very often that a team outrebounds Ludwigsburg and even rarer that they outrebound them on the offensive glass. It wasn't by a small margin either,  Manresa pulled down 55 rebounds to Ludwigsburg's 42.  Pedro Martinez's squad also converted those rebounds into 17 second-chance points. Rebounds are possibly the king of hustle stats because they ultimately come down to energy and desire. The fact that Manresa were the first team all season to win that battle against Ludwigsburg, speaks volumes.

Before the game much of the narrative was centered around the similarity in style between the two teams and right from the opening tip, both teams could have been forgiven for thinking they were playing against a mirror image at times.

It wasn't just the opening tip that was in sync either. If there is a record somewhere for the highest number of full-court pressure possessions in a senior professional game, that record was almost certainly broken last night as both teams looked to defend up the floor as often as possible.

Manresa and Pedro Martinez got things started with a major statement of intent. The double zipper entry into this sideline out-of-bounds play isn't one we have seen much this season, if at all, and it completely caught Ludwigsburg off guard. When a team runs a zipper cut into a pick-and-roll with the angle horizontal across the lane like this, the idea is to stretch the screener's defender away from the action and open an angle for a pass to the roller. In this case, the double zipper entry seemed to cause Ludwigsburg to defend the screen a shade late and get stretched even more than usual.

Later in the first quarter, Manresa went back to a Zipper set into pick-and-roll. This time Ludwigsburg were more aware of the need to be on time to defend the ball screen, allowing Sima to make the read and sprint back door. Both John Patrick and Justin Simon spoke after the game about the athleticism of Manresa's backcourt being difficult for them to handle. Plays like this are exactly what they were talking about.

That same foot speed was at play in Manresa's scheme to beat the Ludwigsburg press. Watch how Sima gets out in a full sprint as soon as the ball goes in the basket. Wobo gave full effort to get back and attempt the block but the fact that he wasn't able to get back in time to block the shot is purely about matchups.

On the defensive end, there was more of the mirror image game going on. In two consecutive possessions, we saw almost identical rules for both teams' star shooting guards. In this clip, watch how Manresa are pressing full court to rush the ball-handler, then forcing Radebaugh to his left hand and away from the pick-and-roll. Radebaugh is forced to give the ball up and even though Justin Simon was able to create an advantage, Manresa were prepared to live with somebody other than Radebaugh creating offense. Although that nearly cost them as Simon was excellent value for his 18 points and 5 rebounds.

The very next play saw almost identical treatment for Joe Thomasson. Full court pressure, then forcing him left and away from the pick-and-roll. Thomasson ends up taking the shot but it was heavily contested by Woodard and if Thomasson was going to take shots, these were the shots Ludwigsburg wanted him to take.

It's very difficult to keep players like Thomasson and Radebaugh quiet for long with one type of coverage. They tend to quickly figure it out and find a way to get it done. In Thomasson's case, it really didn't take long at all. The minor adjustment to use the extra burst into a runner instead of the pull-up jumper is what makes Thomasson such a tough cover defensively.

Coming into the game there were serious questions asked about the health of Dani Perez. Especially as he had missed the previous ACB game against Tenerife. By the time the first half was done, everybody had realized that Manresa's orchestra conductor was very much in good health - or at least if he wasn't, it wasn't showing on the floor.

The way Manresa plays on offense is very much predicated on their ability to get up the floor quickly and get into their offense just as quickly. To be specific their "Drag" offense. Perez is the vital cog in that machine with his ability to manipulate angles and make passes.

"We kind of lost our identity. Those guys [Manresa] got a little comfortable and we didn't have the same type of grit that we normally have throughout this Champions League," said Justin Simon after the game. The fact that Perez was able to force tempo and look so comfortable creating in the two clips below is the kind of thing he was talking about.

That quote from Justin Simon was actually more in reference to the second half as the first two quarters actually ended tied and at times during the first half, Ludwigsburg were on top. However, the warning signs with the matchup battles in the frontcourt and Manresa creating the better offense, were already there to see.

Speaking of Manresa's frontcourt, it might seem strange to say it but Chima Moneke was almost quiet in the first half. He did catch the eye with a hot-foot speed to the rim but it wasn't until the second half when the effort plays on the glass led to the kind of emotional leadership we have come to expect from him. The putback in the clip below and the flex afterward was the kind of huge play that he has made all season and that Manresa crowd were so ready to feed off it.

In truth, that clip is more about the gamesmanship tactics of using a partizan crowd to your advantage than it is about any on-court tactics. But that really was the difference in the second half and it is an advantage that this team has used for leverage consistently all year. Yes, the depth and athleticism in their frontcourt was huge, and without question, that depth played a huge role in their ability to make energy plays in the third and fourth quarter but this Manresa team's energy also comes from their ability to ride their emotions. For some teams, especially with young players, that can be a weakness but this is a consciously emotional team. You might see them in the footage after the win and think they have gone so high that they must be due for a fall but then you see them the next day, in the hotel, relaxed playing pool like nothing happened the day before.

Next up is a foe that they know all too well having lost to Lenovo Tenerife in the last ACB game before traveling to Bilbao. That game is unlikely to count for much as far as either team is concerned. Recovery will be the big factor now. If Tenerife are able to rest better and come into the game fresher, they will enforce their style of basketball on the game and if they do that, not many teams can live with them. If Manresa are able to completely hit the reset button and force their tempo on the game, that athleticism and tempo is certainly not going to suit anybody but Manresa. 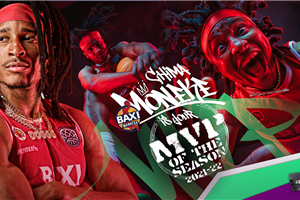 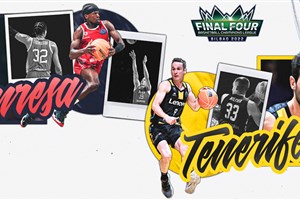