Quarter-Finals: What have we learned so far? (Part I)

MIES (Switzerland) - If the first games of the Quarter-Finals are anything to go by we have some monumental series ahead of us. Two of the games were won by three points or less and BAXI Manresa served up one of the most dominant quarters of basketball we have ever seen in the Basketball Champions League. So, what have we learned from those first games?

Before the game, in fact, before every game that Ludwigsburg play, one of the big questions is always how well will their opponents handle the pressure defense. And after one game we would probably have to say that U-BT Cluj Napoca handled it pretty well. At least by the eye test that is.

They rarely looked rushed and used a mix of ball screens in the backcourt and crisp passing to navigate the ball up the floor relatively easily. The numbers paint a slightly different picture. Ludwigsburg managed to set their press on 15 possessions out of 78, good for about 19 percent of the time (below their season average).

Of those 15 possessions, Cluj Napoca only scored 11 points, which is a good amount lower than their Offensive Rating of 102 points per 100 possessions for the game. They also turned the ball over twice but neither of those turnovers was in the frontcourt or led to easy looks in transition for John Patrick's squad.

The clip in the tweet below is a great example of what has made this Cluj Napoca team so much fun to watch.

But if we take another look at that clip, there is maybe another story to tell. Watch again from the start of the play. We start with the ball still in the backcourt and being inbounded from a dead ball situation. This is a prime position for Ludwigsburg to set up their press.

Instead, we can clearly see that only one player was in a position to press, and even before the ball is inbounded we can see #13, Polas Bartolo appears to look over to the bench with his arms out as if to suggest there is some confusion about what to do next. Either way, if the press was supposed to be coming it was late and all too easy for Brandon Brown to bring the ball up the floor. We also see John Patrick express his feelings to the bench.

And again in this next clip, we start from a dead ball. The press is much more assertive this time and they force the first pass to go exactly where they want it on the side of the floor. They even force Cluj Napoca to take a dribble and turn their head away from the middle of the floor. This is a perfect opportunity to trap and sure enough, the trap comes...but only one of the Ludwigsburg players is active with their hands and the pass over the top to break the press is waaaay too easy. You don't need to be a body language expert read how John Patrick felt about it.

In a tight game, possessions like the two above can make a huge difference. So, what have we learned? Well, we have learned that it did look like Cluj Napoca handled the press pretty well but also that the pressure definitely slowed down their superfluid offensive chemistry and that there is absolutely room for John Patrick's squad to execute better.

At home, with those drums banging and the adrenaline pumping from a do or die game, we'd have to expect that they will execute better. Mihai Silvasan and Cluj Napoca will certainly be expecting them to.

What have we learned from Manresa against Unicaja? Actually not much. That was the first time in BCL history that a team failed to make a single field goal in an entire first quarter. Manresa played like a hurricane in the first half and their opponents Unicaja more resembled a flag being blown all over the place in that hurricane. Put simply, that isn't going to happen again.

Professional pride won't allow it and there are too many good players in that Unicaja squad for it to even be imaginable. Manresa will still be a big favorite to take the series, but they will know that it's going to be a very different game down south.

If we learned one thing from this game it was a new application for the word "Churro" or according to Pedro Martinez, in its abbreviated form, "CH".

This was, of course, in relation to this crazy shot by Sylvain (San) Francisco (we really hope that nickname sticks).

Now, yes, for the eagle-eyed X's and O's aficionados amongst you, that was Pedro Martinez drawing up the Brad Stevens "Winner" play that we see so often in these late clock situations but - as usual - Pedro Martinez is right, the credit has to go to Francisco for making the shot.

The defense actually saw the play coming and covered it very well. If you watch closely you will see Manresa's #12, Steinbergs actually screens his own man, clearly expecting a switch. Instead, Unicaja's #31, Matt Mooney, shoots the gap perfectly and contests the shot as well as he possibly could have. But the mood Francisco was in that could have been Manute Bol contesting the shot and he would still have made it.

On a side note, this was part one of "What have we learned so far?" We will be back over the weekend to see if there is anything to learn from the Wednesday games. 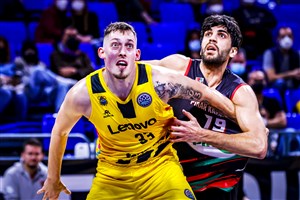 Kyle Wiltjer is the bridge between Tenerife and the BCL trophy

Tofas and its shape-shifter defense 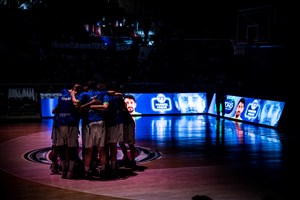