STRASBOURG (France) - After losing in the Quarter-Finals last season, Hapoel U-NET Holon have advanced through to this year's Final Four after culminating their 2-0 series sweep against SIG Strasbourg with an 81-80 win.

Turning point: In the first quarter, Strasbourg went on a 13-0 run and led by nine heading into the second quarter. Holon continued to struggle from three-point, shooting 3-of-12 at halftime as they trailed 35-49 heading to the second half. Holon stormed back and outscored Strasbourg 27-12 in the third quarter to grab a 62-61 lead going to the final quarter.

With Strasbourg up 77-76, Joe Ragland knocked down a three to put Holon up 79-77 with 50 seconds. Matt Mitchell then converted an and-one to put Strasbourg back on top 80-79 with 22 seconds left. Then, on the next possession, none other than Ragland hit a step-back jumper to give Holon an 81-80 lead with 11 seconds left.

On the final possession of the game, Strasbourg got a good look from Mitchell, but the mid-range shot came up short, giving Holon the series sweep.

Game hero: Tyrus McGee led Holon with 21 points on 6-of-12 shooting from the field, but the game hero has to be Ragland.

Ragland came up clutch when it mattered the most, knocking down two big shots down the stretch that helped Holon get the series-clinching win.

Stats don't lie: With most of the stats in this game ending up pretty even, it came down to two things; shooting and defense.

Both Holon and Strasbourg made 30 shots from the field, but Holon were more efficient, as they only attempted 59 shots, while Strasbourg had 76 total shots.

On the defensive side, Holon came up clutch with 7 blocks, as Michale Kyser swatted away 6 shots, the most in a BCL game this season.

Bottom line: With Holon now advancing to the Final Four, they are the first Israeli team to reach this phase of the competition. They will face Lenovo Tenerife in the Final Four in Bilbao.

Tonight marked the third time that Holon came back from a 16-point or more deficit to win a game.

Strasbourg were led by Mitchell who scored a game-high 24 points (12 points in the fourth quarter) along with 5 rebounds on 9-of-16 shooting from the field and 4-of-5 from three-point.

They said: "First of all, it's a very exciting moment for this club," said Holon's Guy Pnini. "This is my fifth season [with Holon]. Last year we made the top 8, it was a very big thing for us. Today, we made history. History for this club."

"If he [Pnini] didn't make the shot in the Play-In when we played against Besiktas, we wouldn't be sitting here," said Holon head coach Guy Goodes. "At halftime when I come to the locker room, I look at the stats and I say we are far, far, far from our targets. In the end, a couple of big shots, we won the game. It's history. I'm really happy for this organization."

"It's a very tough loss," said Strasbourg's Mitchell. "That's a great team [Holon]. Keeping the reigns on them is very hard. ... I think after halftime, we just came out flat. We didn't pressure them in the third quarter like we did in the first half, and we didn't make their plays hard on them. We didn't make them work as hard for anything. ... I don't have any regrets. I played my heart out and left everything on the court, as did my teammates."

"Congrats for Holon. We show that we can challenge them, but on the other hand in the second half, they showed why they have been lately winning," said Strasbourg head coach Lassi Tuovi. "It was tough, a very physical game, ending up a one-point ballgame at the end which is bitter. I think Holon also put the level up (in the second half)." 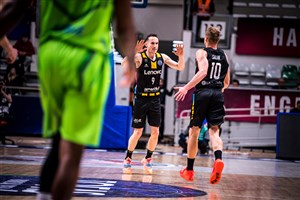 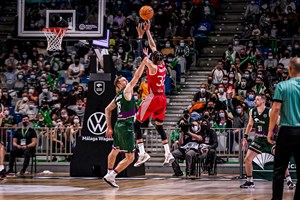