SAN CRISTOBAL DE LA LAGUNA (Spain) - The first matchup between two title contenders in the Play-In series went down to the wire. When the game was on the line, Txus Vidorreta called his favorite play, sealing the deal for Lenovo Tenerife against Pinar Karsiyaka in a 76-69 win to take a 1-0 lead in the series.

Turning point: It was a close game throughout 40 minutes, with no team able to open up a gap bigger than seven points. Pinar Karsiyaka cut the lead to 71-69 in the final minute, keeping themselves alive, but they fell for the good old trick from Vidorreta's playbook that saw their compatriots lose the game in San Cristobal de La Laguna back in 2019.

Tenerife set up a play which looked like the Spain pick and roll, but instead Giorgi Shermadini set a flare screen to free up Sasu Salin. Marcelinho Huertas delivered the pass, Salin delivered the three-pointer, there was no coming back from -5 over the last 27.8 seconds of the game.

It's time this play was named "Tenerife" or "Salin" because there is only one team in the world that uses it as effectively in late-game situations. #BasketballCL https://t.co/sGmEArf9fs pic.twitter.com/0ARIIgnkgw

The same play was already used to win a game against a Turkish team by Lenovo Tenerife in the same arena, on the same side of the floor, too. Back in 2019, Tenerife defeated Gaziantep on a late game three-pointer by Salin.

This is one of the most beautiful ATO sets to win the game I've ever seen.
Txus Vidorreta is a genius.#BasketballCL pic.twitter.com/OB6laEqVWF

Game hero: Double-doubles with assists are always sweet. Marcelinho Huertas had 18 points and 10 dimes, with 0 turnovers, leading the way for Lenovo Tenerife.

Stats don't lie: In a close game like this, it was fouls that got Pinar Karsiyaka out of the game. They committed 27 of them, compared to 16 of the hosts, with the crucial ones being two technical fouls for flopping called on Bonzie Colson, which got last season's MVP ejected in the fourth quarter.

Bottom line: Tenerife did what they had to do in their first game back after a covid-related break in their schedule. Karsiyaka will try and force Game 3 with a win in Turkey - the winner of the series goes on to the Round of 16 group with Falco Szombathely, Rytas Vilnius and SIG Strasbourg. 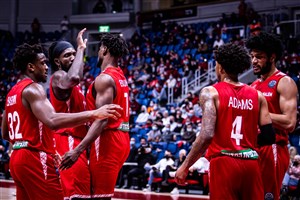 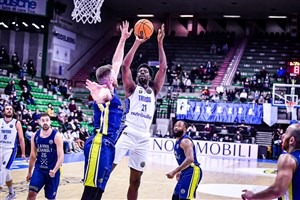