Kabaca re-paying Galatasaray for their trust

ISTANBUL (Turkey) - Sadik Kabaca felt a lot of pressure coming into this season. Not only was the youngster expected to produce in the Basketball Champions League, but he also believed he needed to re-pay Galatasaray Nef for their commitment to him. And the 21-year-old is doing just that.

Kabaca has collected 7.1 points, 3.9 rebounds and 0.9 assists for an efficiency of 9.7 in 20 minutes so far in Galatasaray's BCL run this season, ranking hime fourth on the team in rebounds and sixth in scoring.

"I think I have played okay until now. I'm just trying to help the team win and trying to do that consistently," Kabaca said.

"I was little nervous in the first three games," he admitted. "Coach (Ekrem Memnun) and the staff helped me analyze my mistakes. After that I tried to not repeat the same mistakes, and it worked for me."

Kabaca said the trust from Memnun and the team has been a major help for him.

"Knowing that my coach and my teammates are trusting me is giving me confidence. I think I'm very lucky about that. I'm so happy about being able to help the team," he added.

Kabaca joined Galatasaray this past off-season as his third team in three seasons, going from Bandirma in 2019-20 to Besiktas Icrypex last season and now Galatasaray.

"I felt they believe in me a lot, and I could be a part of a great team," Kabaca said.

Not only did the Lions sign Kabaca on a contract for two years plus an option for the third, but they also paid a buyout for the last two years of Besiktas' contract with him. And that meant a lot to Kabaca.

"It put some pressure on me at first, but as time passed I understood that there was nothing to be nervous about. All of the club was supporting me, so I was relieved," he admitted.

Kabaca's basketball days go back to when he was about 9 of 10 years old. He said his mother put in in a basketball school in Izmir and he hasn't stopped playing since then.

Even though Pinar Karsiyaka is the big club in the western Turkish city, Kabaca was not a supporter of the team.

"Actually I was living in the Göztepe side of the city, so my area was rivals with Karsiyaka. I was never a KSK fan, I never really liked them," he said. "I did go to one game. I think it was against Petkim. Kaspars Kambala was playing. I really enjoyed watching him."

Kabaca took a big step in his basketball development in 2016, when as a 15-year-old he moved 300 kilometers from Izmir to Bandirma.

"I had other offers also, but Banvit was the best junior program in Turkey, and I thought it would be better for me to go there. I'm glad that I did," he said.

Bandirma have produced so many future pros including Tolga Gecim, Sehmus Hazer, Furkan Haltali, Ragip Berke Atar and Alperen Sengun. The main reason for the success of the club was youth head coach Ahmet Gürgen.

"I think it was the coaches' mentality. All they think about is how you can improve and get better, especially Ahmet Gürgen. If you are a big man, he is a treasure for you," Kabaca said. "Also you had a chance for playing time in the second division TBL team Bandirma Kirmizi. That had a big part too."

Kabaca experienced a major success with Bandirma's youth team in 2019 when he helped the club win the first Turkish U19 title, collecting 18 points and 12 rebounds in a 91-68 victory over Anadolu Efes Istanbul in the Final.

"It was a very happy moment for me. It was my one and only championship in the junior teams," he said.

Also on the team was Sengun, who was two years younger but dominated with 26 points and 21 rebounds against Efes.

"He was very dominant already back then. It was fun to play with him. He is one of the smartest players I have ever played with," Kabaca said of Sengun, who was selected in the first round of the 2021 NBA Draft by the Houston Rockets.

Kabaca made the jump to Bandirma's professional team the following season, making his debut against Efes in October 2019.

"I was very exited about starting to play with the senior team. It was great experience for me," he said. 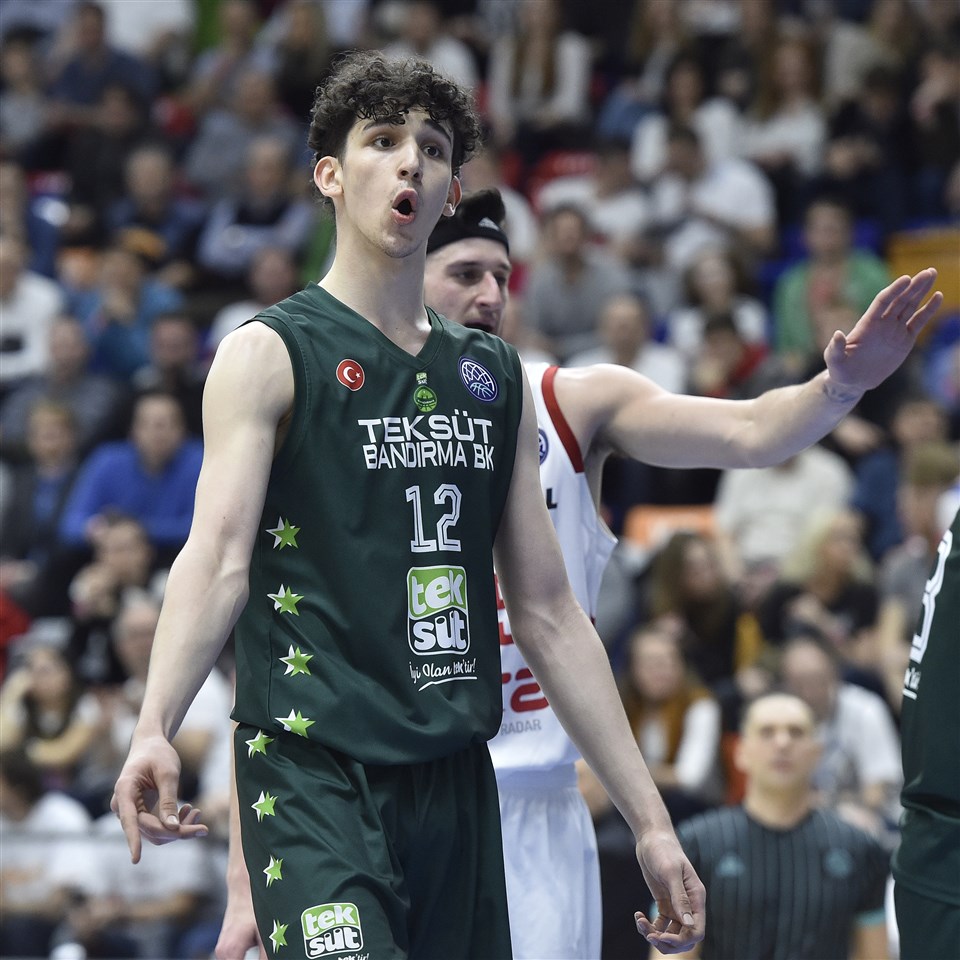 A couple of days after his pro debut, Kabaca then made his Basketball Champions League debut against Hapoel Bank Yahav Jerusalem.

"It felt great because I was sitting in the stands watching Basketball Champions League games, and then suddenly I was the one playing on the court. It was like a dream come true moment for me."

Kabaca turned 19 years old a couple of months later and totalled 19 minutes in his first five games before playing 12 minutes and collecting 0 points, 6 rebounds, 2 assists and 2 blocks against EB Pau-Lacq Orthez on February 5,  2020. In the Turkish top flight, he totalled 33 minutes in his first eight games.

Kabaca's perspectives changed in late February when Bandirma began selling off their foreign players. Kabaca and players like Hazer, Sengun and Haltali all were suddenly thrusted into major minutes.

Kabaca averaged 8.0 points, 1.7 rebounds and 1.0 blocks in 25 minutes over the final three games of the Turkish pro league before it was shut down due to the Covid-19 pandemic. And Kabaca collected 3 points and 1 minute in 21 minutes of the first game of the BCL Round of 16 playoffs against Nymburk and then had 9 points, 3 rebounds, 1 assist and 2 steals in 23 minutes of the second game against the Czech side.

"We tried to take advantage of the situation by trying to prove ourselves to the people," Kabaca recalled. "I think we did a good job on that, but unfortunately Covid hit us."

About the games versus Nymburk, he added: "I wasn't playing much at that moment. All I wanted to do was show everybody that I can compete at this level. And I played with that motivation."

He said those games before the pandemic were great of his confidence.

"It helped a lot. When you don't play too much sometimes you can forget what kind of player you are. It helped me remember who I am," he said.

The Bandirma club eventually folded and Kabaca and the rest of the club's top talents were sent to Besiktas. Kabaca thought he would be well served with the deal as he expected to get some good playing time.

"It was a reasonable deal for me. I was thinking that it could be very good," he said.

Kabaca ended up playing about 16 minutes per game in the 2020-21 season, averaging 4.2 points and 3.1 rebounds in the Turkish BSL and three times scoring in double figures. But he wasn't happy.

"It was a frustrating season for me. I was expecting a lot more from myself," he said. "I was also dealing with a lot of problems off the court. It was hard for me, but I'm happy I went trough that at a very young age. The coaching staff helped me improve a lot mentally."

Like so many other talents, Kabaca also had a learning experience at the national team level - namely a bitter loss at the FIBA U18 European Championship 2018. In the Round of 16, Turkey came back from a 21-point deficit against hosts Latvia and actually led by four points with 2 minutes to play. Kabaca and co. ended up losing though 62-61, failing to score multiple times in the closing seconds.

"I remember that game like it was yesterday. We played great defense in the second half. We managed to go up, but in the end we couldn't use our chances on the last possession," he remembered. "We finished last in the group stage, but we almost eliminated the home team. That taught me that in tournaments like those, no matter what, you always have a chance."

That was just Kabaca's first FIBA experience with Turkey on his chest. He played at the FIBA U20 European Championship 2019. Then last summer he was part of the Turkish senior national team training camp for the FIBA Olympic Qualifying Tournament.

"I wasn't even expecting to see my name on the training camp list, so I was enjoying every moment. That camp improved me a lot because the coaches were pushing me to work on my game and just being at the camp give me more confidence," said Kabaca, who was one of the final cuts and did not play in the OQT in Canada.

"When they told me I was not on the team, I was still very happy. Nothing changed for me."

"I was little nervous and excited because it was my first game. I tried to get rid of it but I couldn't. It effected me a little bit, but still playing for your country was great feeling," said Kabaca, who picked up 2 points and 1 steal in 11 minutes against Belarus.

A couple of days later, Kabaca was on the Turkey team that played at home against Great Britain and won 84-67.

"It was a great atmosphere at the Sinan Erdem Dome. It felt pretty good," he said about tallying 2 rebounds as a starter, missing his two shots for 0 points in 6 minutes.

It was the same Sinan Erden Dome where Kabaca plays his home games for Galatasaray, including his return to the BCL this season. Kabaca appeared in three FIBA Europe Cup games last season with Besiktas, but he was excited about getting back to the BCL.

"My last Basketball Champions League game was Nymburk too," he said, referring to Galatasaray's BCL season-opener at home against Nymburk, which was the same club he faced in the Round of 16 in 2020. "It was interesting. I had the same mentality: proving myself and helping the team win."

Bandirma lost back in 2020 but Kabaca and Galatasaray got the win. And that was the start of him paying the club back for their trust in him. 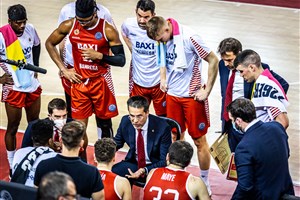 Week 5 Wednesday Round of 16 games preview 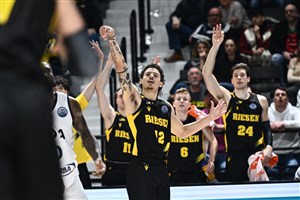