LAKTASI (Bosnia and Herzegovina) - Igokea m:tel were playing without De'Shawn Stephens, Dalibor Ilic and Stefan Djordjevic, but got a career game from Nikola Tanaskovic, backed up by Markel Starks in the backcourt to defeat Filou Oostende 87-72 and take a 1-0 lead in the Play-In series.

Filou Oostende were also playing shorthanded, without their point guard Phil Booth. The double NCAA champion should be available for Game Two in Belgium next week.

Turning point: Igokea had a strong third quarter, with Marko Josilo knocking down consecutive three-pointers, but the Belgian champs responded and held their ground until the final five minutes, cutting the gap to 72-66.

They even had a chance to get closer, but a transition turnover led to Igokea's strong final charge. The hosts did not allow anything easy the rest of the way, and got their two-pointers on the other end, through Aleksa Radanov's layups and Markel Starks' midrange pullups.

Oostende were held to two just two points from the 5:00 mark to the final minute of the game, while Igokea scored 15 points in a hurry.

Game heroes: It's not a very modern thing to see a scoring guard who is not a three-point threat, but Starks ran the clock back to 1990s with his play. He had 16 points on 8-of-11 shooting while not attempting a single three-pointer, also dished out 7 assists, and had a man in the middle in Nikola Tanaskovic.

The 24-year-old center scored a total of 15 points before this game, but counted to 21 on 10-of-13 shooting, delivering impressive dunks on offense and protecting the rim with 3 blocks on defense. Tanaskovic only scored twice in double digits for Igokea in the Adriatic League, but is now enjoying the bigger role with Stephens, Ilic and Djordjevic sidelined.

Stats don't lie: Igokea m:tel forced 16 turnovers by Oostende, and won the points from turnovers 21-2, protecting their home court in the first game of the Play-In series.

Bottom line: Oostende will try and tie the series up in Belgium next week and force another game in Laktasi to see who goes through to the Round of 16. Winner will join Unicaja, U-BT Cluj Napoca and the better of B2 v Prometey in Group K.

"It was a struggle for both teams, we both missed some important guys. We managed that at the beginning, we had some problems with the offensive rebounding, that's why we didn't take a bigger lead early on. In the second half we only scored 30 points, and received 29 in the third quarter. That was the biggest problem. (Game Two) will be do or die, win or go home for us." - Simon Buysse, Filou Oostende

"We are missing game rhythm. First half was decent, but third quarter was decisive, we didn't commit a single foul in seven minutes and 15 seconds, and our opponent executed that with dunks from pick and roll, dunks from transition. Fourth quarter, we were still there, 72-66, then a fast break turnover led to their basket. Another possession, turnover, they score. That physicality of Igokea cost us a chance to be better." - Filou Oostende head coach Dario Gjergja

"We came out knowing we were missing three big guys in our rotation, but we wanted to fight. To try and erase their height advantage, and our guards did an excellent job against their bigs after switches on low post. On offense we had our game plan, we executed it perfectly, this is a big win for us. We won't relax for Game Two." - Nikola Tanaskovic, Igokea m:tel

"Preparing for this game, we were very ambitious, taking back-to-back-to-back games, improving our form, improving individually, and we had some load management in our last away game. When we came back to prepare for this game, we had one trouble after another. First, Ilic did not recover, then one by one Stephens and Djordjevic told us they have some issues, and we started to miss big guys. We had little time to adjust to our game. During the warm up, a couple of other guys told us they had minor injuries, we were left with very short rotation. We are not Real Madrid, but we are not bad." - Marko Barac, Igokea m:tel assistant coach, who was in charge in Dragan Bajic's absence 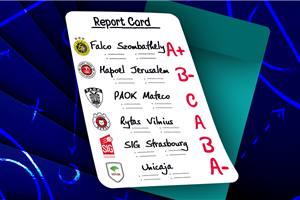 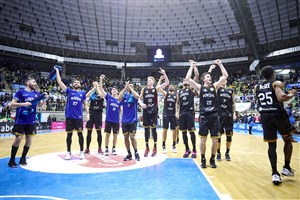