OOSTENDE (Belgium) - Perfect week for the champions of Ukraine! Just 48 hours after beating Unicaja at home, they went on the road and handed Filou Oostende a 91-87 defeat in Belgium to rise to 2-0. Miro Bilan was unconscious, breaking a pair of records along the way.

Prometey were the last team to qualify for the Round of 16, but are now feeling like the Quarter-Finals are an inch away with back-to-back wins this week. Oostende are in trouble at 0-3.

Turning point: The scoreboard said 78-77 Prometey with five minutes left in the game, and it seemed like this one would go all the way down to the buzzer, which is something that we are used to whenever Prometey and/or Oostende are on the court.

Coach Dario Gjergja almost witnessed a comeback as his guys got back to -2, but Bilan stayed calm from the line to push the lead to +4 from Prometey's point of view with just over 40 seconds left, and once Levi Randolph's three-pointer rimmed out, it was clear that the points were going back to Ukraine.

Game hero: Miro Bilan played probably the best game of his entire career. The Croatian center dominated against Oostende's big guys, killing them 1v1 with his low post moves, getting a couple of BCL season-highs.

He grabbed 10 rebounds, giving him a double-double on the night and an efficiency rating of 46. Not only the largest of the season, but also the second largest efficiency of all-time in BCL, trailing only Steven Gray's 47 from 2020-21.

Stats don't lie: For the first 26 minutes of the game, Prometey only had a single turnover. They finished with only five, not allowing a single Oostende steal for 40 minutes - this is only the second time in BCL history that a team failed to register a steal, after Lietkabelis in January 2019.

Bottom line: Teams from the Qualifying Rounds are enjoying the view from the top - U-BT Cluj Napoca and Prometey are at 2-0 ahead of their duel in March, Unicaja are going to stay at least third for awhile at 1-2, while Oostende need to find a way out of the hole at 0-3

In positive news for Oostende, Amida Brimah had 5 blocks, tying the BCL season-high in that department.

"Obviously it was a very tough game for both teams, from the beginning to the end it was basically a tie game. It was especially tough because both teams already played this week, Oostende played on Monday, we played on Tuesday. In the end, we played pretty good and we deserved to win. Yeah, this is my career-high, I've never scored this many points in (professional basketball). It was that type of night. They didn't change the defense, it's hard to double team against us when we've got great shooters, and we can score from outside." - Miro Bilan, Prometey

"It's an important win for us, we played against a great team, with a really good coach, I respect him a lot. We didn't play good defensively most of the game, in the offense our percentage from three was not good enough, but we played through Miro and managed to score points." - Prometey head coach Ronen Ginzburg

"That was a really good team, they made a few more plays than we did at the end. Hats off to them, they came out with a really experienced team and did a good job against us here. (Bilan) was a force tonight. He had his way tonight, kinda made every play they needed, it's tough to stop a guy like that." - Phil Booth, Filou Oostende

"Bit of mixed feelings. In one way, I'm very proud of our guys, in other way, I'm disappointed that we couldn't succeed. In all of these three games, we've been there. Few minutes, few mistakes, few possessions maybe... and we played against teams that are budget-wise among the best, much bigger than us. Quality in one moment made the difference. Whenever they needed a shot to make, they made it. We didn't give up, even at -9 we made it to -2, through that sense I'm very happy." - Filou Oostende head coach Dario Gjergja 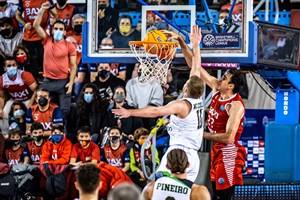 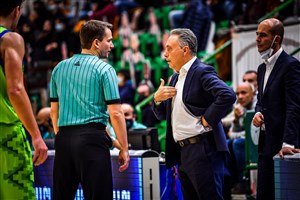