MIES (Switzerland) - The fourth season of the Basketball Champions League tips off on Tuesday evening as 16 teams take to the court in Qualification Round 1 hoping to emulate the feat that Telenet Giants Antwerp accomplished last year.

The Belgian outfit started off in Qualification Round 1, advanced to the Regular Season and made it all the way to the Final Four. They hosted the showcase event in Antwerp and, after falling to Iberostar Tenerife in the semi-final, they prevailed 72-58 over Brose Bamberg in the game for third place, in front of 16,000 of their fans. 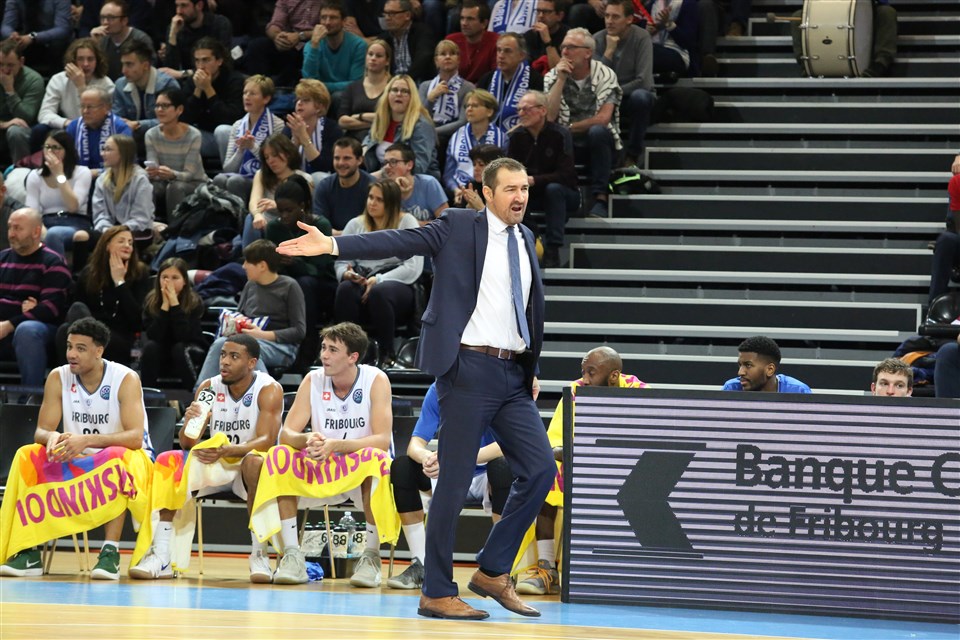 'Been there, done that' - Petar Alekisc led Fribourg Olympic  last year from Qualification Round 1 to the Regular Season

There are several teams in this year’s Qualification Round 1 that have valuable European experience under their belt while one of them, Swiss champions Fribourg Olympic, went through three qualification rounds last year and reached the Regular Season.

Let’s have a closer look at the Gameday 1 match-ups in Qualification Round 1.

The Finnish champions made it all the way to Qualification Round 3 in last season’s Basketball Champions League but fell to French powerhouse Nanterre. Karhu’s roster has undergone substantial changes but veteran point guard Bojan Sarcevic, a key player last season, is still on the team.

"First of all, Karhu definitely has the heart of champions, because they are the best in Finland," Tsmoki Minsk head coach Rastsislay Viargu told championsleague.basketball. "In addition, they have huge experience from last year, when they advanced to the third round. We know that they try to play fast basketball, scoring a lot of points and pushing the ball up the court."

Tsmoki-Minsk fell to Torun in the 2018-19 Qualification Round 1 and transferred to the FIBA Europe Cup, where they finished third in Group B. Guard Dominez Burnett and power forward Alex Gavrilovic are among several new additions to the roster of the perennial Belarus champions.

"They are a team that has been together for a long time and the Slovakian champion title speaks for itself." The Swiss champions on the other hand set the bar very high last year, as they advanced through all three qualification rounds and punched their ticket to the Regular Season.

Fribourg finished Jin seventh place in Group B where they went up against the likes of Iberostar Tenerife, Reyer Venezia, Nanterre or PAOK Salonica, but their roster was overhauled in the off-season and point guard Jérémy Jaunin is the only one remaining on the team from the players who featured in all 14 regular season games last year.

"Despite the fact that we’ve changed the roster we have an obligation to perform well, first of all physically to respond to the challenge," Aleksic said. "Last year we performed a huge surprise and ever since we have been taken seriously. Our task is to protect ourselves and we are ready to do so."

Falco took third place in Group H of the FIBA Europe Cup in the 2018-19 season and although that was not enough to earn them a ticket to the second round, it proved a first-class experience as they went on to lift their maiden Hungarian championship title.

"I know that Falco has a good team, they run well, they have great energy, and they feed off their explosive fans," CSM CSU Oradea head coach Cristian Achim told championsleague.basketball.

"I expect a game of 80 minutes," coach Achim added. "We have 11 players from last season and only two new faces. I suppose this is an advantage for us, compared to the changes our opponent made during the summer, but it’s purely theoretical. We must show on the court what we can do. I believe we are in good shape at the moment and we start doing the things that we must do in order to perform well and win games."

The reigning Romanian champions, who were one of the surprising packages of the inaugural edition of the Basketball Champions League back in 2016-17, were eliminated at the hands of Karhu in last season’s Qualification Round 1. Oradea continued in the FIBA Europe Cup but their campaign was short-lived as they finished bottom of their group.

The Cypriot league champions had only a brief European campaign last year, as they were eliminated by Ukrainian side Cherkaski Mavpy in Qualification Round 2 of the FIBA Europe Cup. They regrouped however to go on and win both the domestic league and cup trophies, and they are bringing back the core of that triumphant team.

"Keravnos is a team that loves to play ball," Bakken head coach Steffen Wich told championsleague.basketball. "They have a great feel for the game and play with a fast pace. They have a good mix of experienced pros and some interesting new players. It will be a tough challenge for the Bears."

Bakken made the most of a bad situation last year. They failed in their bid to reach the Basketball Champions League Regular Season, as they lost to Spirou Charleroi by only a three-point deficit on aggregate. They continued over in the FIBA Europe Cup however, and they managed to advance through the group stage and all the way to the quarter-finals, were they fell to eventual finalists s.Oliver Wurzburg.

The Swedish champions only got a limited taste of European competitions in the 2018-19 season as they were ousted by Israeli side Ironi Ness Ziona in Qualification Round 1 of the FIBA Europe Cup.

They finished their season on a high note of course as they retained the domestic league title, but their roster underwent several changes in the off-season. Croatian forward Toni Bizaca, the star of the team for the best part of this decade, is no longer on the Kings but there are still familiar faces, such as veteran guard Martin Pahlmblad.

The Bulgarian champions enjoyed a much deeper European run last season, after advancing from Qualification Round 2 of the FIBA Europe Cup. They won Group B ahead of Petrolina AEK, Tsmoki-Minsk and Belfius Mons-Hainaut and they also made it out of their second-round group, interestingly just behind Ironi, the same team that had eliminated the Kings in the qualification stages.

Balkan’s run ended in the Round of 16, as they found themselves on the wrong end of a very tight two-leg tie with Unet Holon and lost by just three points on aggregate. Balkan changed their roster substantially in the summer, but Bulgarian internationals Kris Minkov and Dimitar Dimitrov are two important players who link the new team with lat year’s successful side.

"One of the main strengths of Balkan is our great fans," said Balkan head coach Jovica Arsic. "Maybe our main weakness as a team is that we don't yet have reached full synergy. Against the Kings, we will have to keep under control the rebounds and their three-point shooting."

Benfica were unlucky last season as they drew eventual FIBA Europe Cup champions Dinamo Sassari in the second qualifying round of that competition and lost in both legs. The storied Portuguese club hopes to enjoy a longer European campaign this year but that of course means they have to overcome the Dutch league runners-up.

"Donar is a good team, a team with the ambition to get the Basketball Champions League qualification, just like us," commented Benfica head coach Carlos Lisboa. "We will create our strategy and what we believe to be important to win, having in mind that it will be an 80-minute game and we must be ready for the opponent, as they will also try to win. It’s a strong team, a team we already faced before and which is very focused on Basketball Champions League. I foresee a balanced and hard tie but we aim to go further."

Donar fell to Fribourg in last year’s Qualification Round 2 and consequently transferred over to the FIBA Europe Cup, where they topped a very competitive group but failed to advance to the play-offs as they were later drawn in the same group with Italian powerhouses Sassari and Varese.

"Judging from [Benfica’s] results in preparation games they play well," said Donar head coach Erik Braal. "They benefit from having players on the roster who played there before. They know the system and the club, which makes it easier to become a good unit early. We have a new group together, we are hungry and ambitious and look forward to start the qualification."

The Austrian champions took part in the FIBA Europe Cup last year but didn’t advance past Qualification Round 2, where they lost their two-leg tie to Dutch outfit ZZ Leiden. Although the Bulls went on to win their domestic league for the third year in a row, their roster changed substantially in the off-season.

"[The Bulls] have seven foreign players, four Americans and three from Balkan countries, so they don’t play a style of basketball typical of their region," Kyiv head coach Ainars Bagatskis told fbu.ua. "This is a series of two games, two halves. Every point, every action on both defense and offense will be important."

Under the Latvian tactician, the Ukrainian club which was re-established as recently as 2017 made a splash in last season’s domestic Superleague by reaching the title series, where they lost to Khimik. "There are only three players left from last season, therefore we have put together a brand new team," Bagatskis said.

The fresh faces on Kyiv make it something of an unknown quantity, but Kapfenberg head coach Mike Coffin is certain about the Ukranian side’s style of play. "We don’t know much about the Kiev team [but] we know that they want to play with high pace and that have a very good leader," he told championsleague.basketball.

The Kosovo champions were eliminated by Donar in Qualification Round 1 last season and continued in the FIBA Europe Cup, leaving their mark in that competition. Prishtina finished second in Group E, behind Bakken Bears, and barely missed out on advancing from their second-round group, which included eventual runners-up s.Oliver Würzburg and Turkish outfit Pinar Karsiyaka.

"Prisitina started preparations for the new season later than us and [until recently] we did not know much about their plans," commented Legia head coach Tane Spasev. "They have brought back [Dardan] Berisha who is, in my opinion, raising them one level. Berisha is an experienced and battle-tested veteran and they will for sure depend on him a lot. They have a new coach, a couple of new foreigners and guard [Divine] player Miles who, in tandem with Berisha, gives them explosive offense."

The contrast between Prishtina and Legia could not be any starker. The former represents a very young country but has nonetheless quite considerable European experience, while the latter is one of the most storied Polish clubs but only returned to the PLK in 2017, following a prolonged absence from the domestic top flight. Legia have several new faces on the roster although key players such as point guard Sebastian Kowlczyk and forward Keanu Pinder provide continuity with last year. 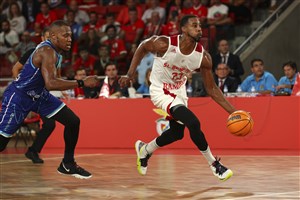