After the rebound, Black 5 has the ball and is lying on the floor. He is closely guarded by White defensive players. Ball goes out of bounds and referees call the out of bounds in favor of the White team (initial decision). Referees can use the Instant Replay System (IRS), when the game clock shows 2:00 minutes or less in the fourth quarter and in each overtime, to identify the player who has caused the ball to go out-of-bounds. After review, which is conclusive, referees keep the initial decision and a throw-in is awarded to the White team.

Blue team has a fastbreak and Blue 20 is fouled by Red 31 in the act of shooting.

The last movement of Red 31 is purposely to the left, and ignoring to play the ball.  This is not a legitimate attempt to directly play the ball within the spirit and intent of the rules, and it should be called as an Unsportsmanlike Foul on Red 31.

Referees could also use the Instant Replay System (IRS) any time in the game, to review whether a personal, unsportsmanlike or disqualifying foul met the criteria for such a foul or shall be upgraded or downgraded.

Red 1 received the pass under the basket and he is faking to make a shot. White 24 jumps in the air to block the shot and hits the ball.

After that, the coach of Red Team has an unsportsmanlike conduct towards referees and he is charged with a Technical Foul.

The replay proves that White 24 hits all ball, which is a legal play, and no foul should be called.

The player Purple 6 is waiting for a pass by his teammate and is guarded behind by White 1. Purple 6 then clamps with his left arm defensive player’s hand.

This is an illegal contact and an offensive foul should be called on Purple 6.

White 9 drives to the basket and is blocked by the defensive player Blue 19 and a defensive foul is called.

When jumping, Blue 19 is not going vertical, but jumping forward and the first contact is with his body. This illegal contact facilitates the possibility for Blue 19 to reach the ball with his right hand and therefore the contact is not marginal. A foul on Blue 19 should be called and 2 free throws awarded to White 9. Team Blue coach has an unsportsmanlike conduct towards referees and he is correctly charged with a Technical Foul. The penalty of the Technical Foul (1 free throw) is executed before the 2 free throws by White 9. 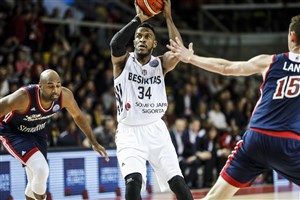