MIES (Switzerland) - It's not how you start, but how you finish.

Besiktas fans know that very well after their team hit the ground running in the first couple of Basketball Champions League campaigns only to then go off the rails in the Play-Offs.

The Turkish outfit has certainly broken with tradition in the third edition of the BCL. Instead of picking up one resounding victory after another to lock up a Play-Offs spot early, the club has had to grind away and figure some things out.

“I THINK ADVERSITY BUILDS CHARACTER AND FOR US, SOMETIMES WHEN YOU TAKE SOME EARLY LOSSES, IT ALLOWS YOU TO DEFINITELY SEE WHAT YOU NEED TO IMPROVE UPON”- Jason Rich

After a single victory in their opening five games, Besiktas have reeled off four triumphs in five games, the latest a 69-64 triumph at Strasbourg on Tuesday night. The most impressive player in that outstanding win was Jason Rich.

The 32-year-old set the tone from the off and finished with his season high of 28 points. Rich, who has a "jump-on-my-back-and-I'll-carry-you-to-victory" quality when the games are hot, has been named the Gameday 10 MVP.

"Sometimes you have those games where you have it going, everything is working, and luckily for me, it was at the right time because that was a big game for us," Rich said to the Basketball Champions League website.

"It was a game that we definitely needed to win to help ourselves stay in position to advance in the Champions League. Once you realize you have it going, you want to stay aggressive but at the same time, I’m happy we played well, stayed focused and won a big game on the road."

Besiktas are 5-5 and in fourth place in Group D behind Segafredo Virtus Bologna (8-2), Promitheus Patras (7-3) and Strasbourg (6-4). Right behind them, however, are Filou Oostende (also 5-5), medi Bayreuth and Neptunas Klaipeda (both 4-6) and Petrol Olimpija (1-9).

“FOR US TO SEE THE PROGRESS FROM OUR HARD WORK EACH DAY FROM PRACTICE TO THE GAME, THAT REALLY BUILDS OUR CONFIDENCE AS A TEAM BUT AT THE SAME TIME, WITH OUR COACHES, THEY KIND OF GIVE US THAT MINDSET OF NEVER BEING SATISFIED WITH JUST ONE WIN.”- Rich

A standout with Sidigas Avellino last season, when he was the Italian League MVP, Rich arrived in Istanbul with a big reputation. He had some good performances before the game at Strasbourg.

Just once, in fact, has he not scored in double digits in the BCL and that was against Strasbourg on Gameday 3, shortly after he joined the club. His previous high was 22 points in a 77-70 home win over Neptunas Klaipeda on December 18.

At Strasbourg, Rich drilled one shot after another, some when he was closely guarded.

Rich has bought into the style of his coach, Dusko Ivanovic, a veteran play-caller renowned for his tough approach in practice and games.

"He is definitely a demanding coach," Rich said. "Details really matter. He wants you to bring your maximum effort every day in practice and in games. As basketball players, we like to say we play hard but he really pushes us to do that every day."

As for those fast Besiktas starts in their first two BCL campaigns, when Rich wasn't with the team, they did not lead to success.

The early struggles of this season could end up being the best thing that ever happened to Besiktas.

"Each year is different but I think adversity builds character and for us, sometimes when you take some early losses, it allows you to definitely see what you need to improve upon," Rich said.

"Sometimes when you win games, you have kind of have a false idea of what you may really be. For us to see the progress from our hard work each day from practice to the game, that really builds our confidence as a team but at the same time, with our coaches, they kind of give us that mindset of never being satisfied with just one win."

That mature outlook should be comforting for everyone at Besiktas, from the players and administration to the fans. It's better to get stronger as the year goes on, to win when you have to win.

The club also has a toughness to it that Ivanovic has to like. Besiktas won at Strasbourg despite not having Germany national team captain Robin Benzing and Kyle Gibson available.

Speaking to the team's depth, Rich said: "I think any time you want to win at a high level, you need productivity off the bench."

Besiktas have a long way to go before they achieve their aims and go on a deep Play-Offs run. With Rich leading the way, though, and the shared belief that overcoming hard times together will make the team stronger, the prospects look good. 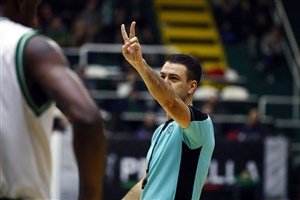 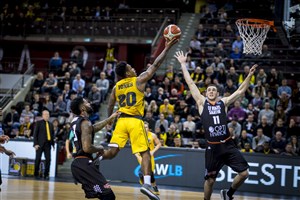