ZAGREB (Croatia) - Here at the Help-Side Column headquarters, overthinking is a common thing. And usually leads to weird conclusions such as the one in the headline.

Iberostar Tenerife, UCAM Murcia, AEK and Hapoel Bank Yahav Jerusalem are the first four teams to book their tickets to the Play-Offs. They have done it in impressive fashion, hard to remember if we ever had this many teams already in the Round of 16 with four Gamedays still to go in the Regular Season, but even with all the power they've demonstrated, don't just count on them to be the last four standing.

Why? Well, because the field is loaded this season.

Imagine the Regular Season ending today. Being the helpful helper from the Help-Side, I'll help with the imagining part:

So, you are AEK, right? You won the toughest group there is, and are feeling good about the Round of 16...and you end up drawn up against, I don't know, a rising Besiktas or a Nizhny from the galaxy far, far away?

Or, you are Murcia, and you are up against the youth of Antwerp, with a win leading towards somebody like Bamberg or Jerusalem in the Quarter-Finals?

Or, you are Bologna and have to face one of your compatriots in the Quarter-Finals - we've learned in the past by Besiktas (and Karsiyaka) and Tenerife (and Murcia) that those matchups hurt the most in the Play-Offs, no secrets between the teams, just 80 minutes of dueling like the banjos in Deliverance.

See what I mean? A lot will depend on the draw after the Regular Season. But it's hard to imagine that two teams from the same group (AEK and Hapoel) will end up at the Final Four. And yet, you wouldn't be surprised if AEK, Hapoel, Bamberg and Antwerp all put together strong postseason runs and make up a Final Four of teams from the same Regular Season group IT'S CHAOS, I TELL YOU, CHAOS MY FRIEND.

See what happens when I have to overthink everything? Caps lock happens. That's what happens.

Speaking of Caps Lock, probably the team in hottest form IS NOT EVEN IN THE PLAY-OFF PICTURE RIGHT NOW! It's Filou Oostende, finally clicking the way Dario Gjergja wanted them to click from day one, and the perennial Belgian champs are finally translating their constant domestic success into a serious international run.

Gjergja's boys are on a four-game winning streak that has clutch written all over it. Not only have they taken wins away from home in Strasbourg, Patras and Klaipeda, plus one at home versus Bologna, Oostende have done it with a combined points difference of +10:

They were on a slow 1-5 start this season. But in a town which was a home to the great Marvin Gaye for a brief period of time in the 1980s, it's no wonder they got that feeling...and are now healing...making themselves feel so fine.

Here's a shouting video of Patric Young to get you in the mood, because I'm going Caps Lock the rest of the way with Avellino:

SIDIGAS AVELLINO ARE ON A SIX-GAME WINNING RUN IN ALL COMPETITIONS, INCLUDING FIVE STRAIGHT SINCE THEY LOST NORRIS COLE, THEIR MVP OF THE SEASON UP UNTIL THAT POINT. BUT SOMETIMES, HAVING THE ROTATION SHORTENED TO SEVEN OR EIGHT PLAYERS MAKES THE REMAINING GUYS BOND, AND DEFEAT THE LIKES OF MILANO DOMESTICALLY AND ANWIL INTERNATIONALLY.

THEY SAY "IN BOCCA AL LUPO" IN ITALY WHEN THEY WISH YOU GOOD LUCK, LITERALLY MEANING "INTO THE MOUTH OF THE WOLF" AND AVELLINO, NICKNAMED THE WOLVES, ARE ENJOYING THE SAYING, EATING EVERYTHING THAT'S THROWN IN THEIR BOCCA AND GETTING HUNGRY FOR MORE SUCCESS.

Team of the week

Rather than just selecting All-Star Five kind of team, allow me to select an actual team as the team of the week. This time, it has to be the record-sharing Nanterre 92!

The French side exploded for a 46-point win against Opava on Gameday 8, which was hard to read, honestly, because they were highly motivated to get one back on Opava, and because of the obvious difference in the standings between the two.

But, for them to go on a record-tying 47-point margin against Telekom Baskets Bonn this week... Man. They have now tied the record-setting performance of Tenerife, away at Capo d'Orlando at the start of 2018.

And to go back to the not-easy-to-predict-stuff point of the Basketball Champions League, a team that has won its last two home games by a combined 93 points (!!!) difference currently sits in fifth spot in their group.

And could miss out on a Play-Off spot. Crazy competition. That's why I love it so much! 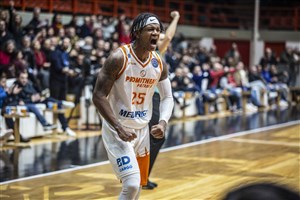 Team of the Week: Blatt, Hatcher, Brown, Rich and Iverson