Black 8 starts a fast break and goes for a lay-up. Defender White 20 stands in a legal guarding position and a contact occurs. The referee calls a charging foul to Black 8.

Outcome: Incorrect decision from the referees. Defender White 20 had his left foot in contact with the no-charge semi-circle. 2 points should have been awarded to Black 8 for the field goal.

White 4 is dribbling whilst being guarded by Black 12. There is a contact and the referee calls a foul to White 4, offensive foul.

Outcome: Correct decision from the referees. The defender didn’t create any illegal contact. It was the dribbler who clamped his defender with his left arm.

Red 0 receives the ball and goes to the basket for a lay-up. In his movement, his left arm hits the defender’s face and the referees call an offensive foul to Red 0.

Outcome: Correct decision from the referees. Red 0 left arm was outside his cylinder and created an illegal contact against an opponent who had a legal guarding position.

After a Yellow team field goal, Black 18 has the ball in his hands to make the throw-in when Yellow 8 tries to interfere with the throw-in and falls to the floor. The referees stop the game and while two referees are talking, Black 18 pushes Yellow 6. The referees decide to check IRS and finally they call an Unsportsmanlike Foul to Black 18. Yellow 6 is awarded 2 free throws and the possession of the ball is awarded to the Yellow team for a throw in at the throw-in line and 14 seconds on the shot clock.

Article 36.2.1 A technical foul is a player non-contact foul of a behavioural nature including:

1. Yellow 8 grabs Black 18 from by waist during the attempt to throw-in. This should be an UF to Yellow 8, 2 free throws and possession for Black 18
2. Then Black 18 excessively swings his elbows. This should be a TF to Black 18 as there was no contact made with Yellow 8. 1 free throw for Yellow team.
3. Yellow 8 excessively fakes being fouled, so he should receive a TF. 1 free throw for Black team.
4. Finally Black 18 pushes Yellow 6, so an UF should be called to Black 18. 2 free throws and possession for Yellow 6.

Article 36.2.3    A player shall be disqualified for the remainder of the game when he is charged with:

Yellow 8 and Black 18 should have been disqualified after being charged with 1 UF and 1 TF each.

Article 42.2.3 All equal penalties against the teams shall be cancelled in the order in which they were called.

Article 42.2.8 If after the cancellation of equal penalties against both teams there are no other penalties remaining for administration, the game shall be resumed as follows. If at approximately the same time as the first infraction:

Therefore, the game should be resumed with a throw-in to the Black team from their own baseline and 24 seconds in the shot clock. 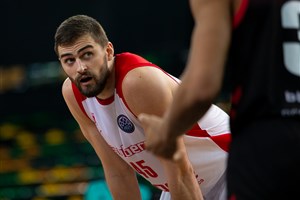