MADRID (Spain) - Week 4 of the Basketball Champions League is in the books and we have finally reached the stage where we have seen every team play. As is regularly the case in the Regular Season, the results so far have been mostly irregular. In just this last week alone, we saw newcomers Igokea take down the Turkish powerhouse of Turk Telekom.

VEF Riga picked up a huge road win at Peristeri (who were so impressive the week before), and the champs, Hereda San Pablo Burgos lost to Oostende by a point in the City Arena. And, of course, Zaragoza won it with a game-winner at home again. Their fans could be forgiven if regular victories started to feel anti-climatic after their first two games of the year - incoming head coach Sergio Hernandez would probably be just fine with a bit less drama.

So, what can we glean already from the orderly chaos that we call the Regular Season? Well, not much with most teams only having played twice but let's dive into some data and film to see if any patterns are emerging that might be worth following in the weeks to come.

If you click the first tab on that data story above we can look at which teams have been most efficient on the offensive and defensive ends (hover your mouse, or tap the logo on your device to see the specifics for each club). When it comes to Offensive and Defensive Ratings (ORtg and DRtg) 100 is the magic number. Anything above 100 on offense is efficient scoring, conversely, anything below 100 is stingy on the defensive end. Maybe the best team to highlight how to understand the chart is Hereda San Pablo Burgos. The champions were almost as elite offensively (ORtg: 129.2) as they were terrible defensively (DRtg: 130.5) against Oostende. Of course, the fact that those numbers are after only one game means that both could change dramatically next week. For that reason, let's focus on the teams that have played twice. To isolate those teams use the filter slider at the top right and slide it all the way to the right. 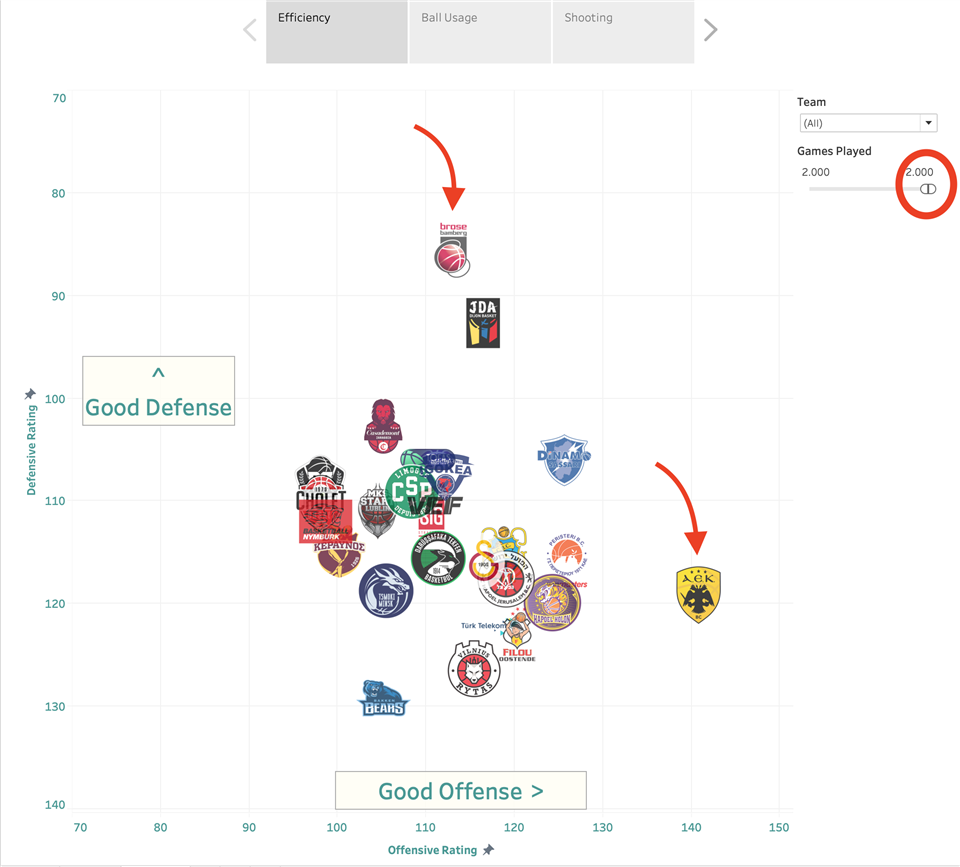 The Queen are absolutely flying on the offensive end. The league average on offense and defense is 112.5 points per 100 possessions. In their first two games, AEK have scored at 140.9 points per 100. The next best offense among the teams that have played twice is Peristeri at 126. If you flip to the next tab marked "Ball Usage" you will see that 74.6% of their made FG's have come from an assist. This is also league-leading amongst teams that have played twice. Only Burgos have produced more buckets from an assist after their one game played.

AEK were great offensively last year but when the primary scorer is a player Like Keith Langford that can create for himself, it's unusual for the team to lead the Assist Percentage charts. One of the differences this year is the addition of Matt Lojeski. Lojeski is such an acute weapon for Ilias Papatheodorou to employ. He requires very few dribbles and even fewer seconds to do his damage. The fact that most of his points come from behind the arc also forces defenses to distort and adapt to his threat, thus creating easier looks for the rest of the team.

Watch the video below from consecutive possessions at the end of the third quarter against Holon. In the first possession, we saw him time his sprint off the pin-down perfectly. In the very next possession, AEK went to the same action, this time Holon elected to switch everything. Lojeski realized and gave the ball back to Nikos Gkikas who punished the switch as his defender was focused on helping on the post mismatch. Very simple but equally lethal.

A common approach teams take to defending lethal shooters in pin-down actions is to "Top-Lock". The idea is to stand on the ball-side of the player and disrupt his ability to use the screen. In the two possessions below, Tsmoki Minsk tried exactly that. The problem is that Lojeski is 6´6" (1.98m) and strong enough to secure deep position in the paint. In both possessions, Lojeski reads the top-lock and translates it into easy points.

This new look Bamberg under Johan Roijakkers is really catching the eye. Group F looked like it could be a group of death before the season and the 2-0 start they have made could prove to be invaluable by the end of the Regular Season. As outstanding as AEK have been offensively, Bamberg have been equal to it on the defensive end. They have allowed just 85.6 points per 100 possessions. The next best defense is JDA Dijon at 92.8. When you also factor in that they have scored at 113 points per 100 possessions Bamberg have been the most efficient team in the BCL so far this season.

The two areas that Bamberg have been most dominant defensively have been defending the ball in the pick-and-roll and defending the post. Coach Roijakkers has really got this team looking slick with their rotations and ability to guard the ball. The frontcourt combination of Chase Fieler and David Kravish has been an enormous part of that. They have also been an outstanding combination on the offensive end, combining for 28 points and 7 assists per game against Fortitudo and Bilbao. But on the defensive end is where the combination has really shone.

Watch the two possessions below. In both plays, Kravish is responsible for hedging on the ball screen then sprinting back to his man. In the first possession, he was quick enough to get back and play solid defense against the giant Balvin down low. The fact that Roijakkers is comfortable leaving him 1v1 against a matchup like that, is very telling. Then the second possession he recovers quick enough to show some help on the drive then deflect the pass.

Of course, it's not only AEK and Bamberg that have shone early in Season 5. JDA Dijon are the only other team to have held teams below 100 points per 100 possessions on the defensive end. With their scoring also at 116.6, they sit second in the overall efficiency table at +23.9 per 100 possessions. Pozzecco's Dinamo Sassari have started the season like a house on fire. If the two wins against Galatasaray and Iberostar Tenerife weren't impressive enough, their shooting and ball usage numbers have been excellent.

Their Turnover Percentage of just 9.8% is good for the top three in the league and as a result, they have taken more shots than anybody. And, finally, Casademont Zaragoza. What can we say here? They have been average or below average in just about every statistical category, yet they sit at 2-0 with AEK, Bamberg, Dijon, and Sassari. Sure, they have needed some Seeley and Ennis heroics to make that happen but with Argentina legend, Sergio Hernandez now at the helm things are looking very rosy in Aragon. 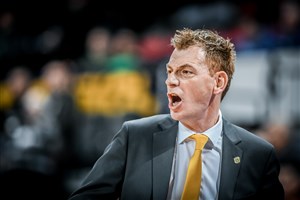 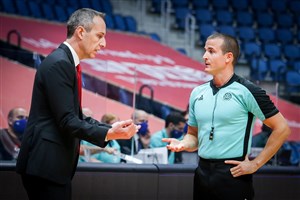