The Basketball Champions League 2020-21 season will involve 44 teams, including many national champions out of the 46 European countries that have been invited.

A total of 176 games will be played over the course of eight months of competition in this fifth season of the Basketball Champions League. 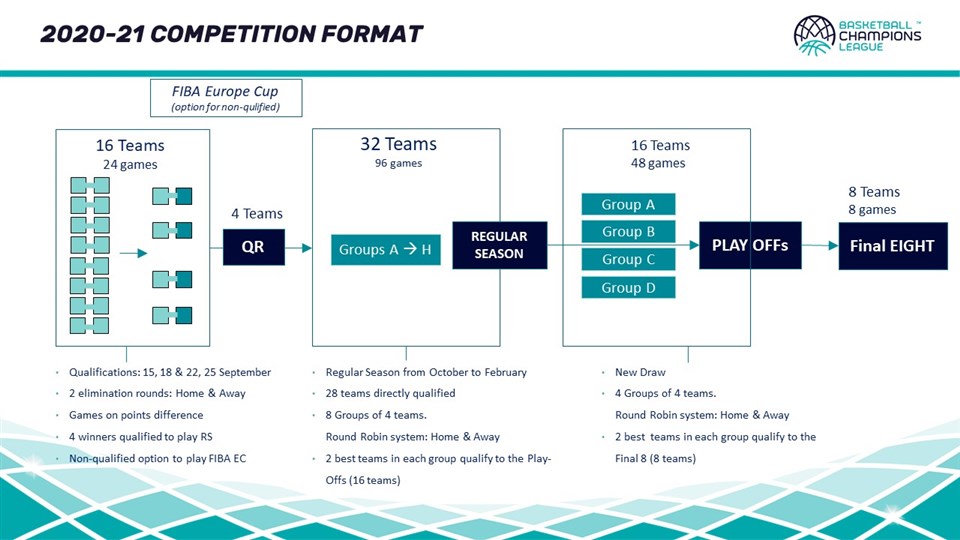 Four (4) teams will qualify for the Regular Season from the Qualification Rounds.

The 16 teams involved will face each other in two elimination rounds played in a Semi-Finals/Final format.

The 32 teams competing in the Regular Season will be divided into eight (8) groups of four (4) teams. Each team in the group will play all others home and away. The first two teams of each Regular Season group will qualify for the Play-Offs.

Sixteen (16) teams advance to the Play-Offs phase, consisting of a new group format of four groups with four teams each. These will be formed with the top two (2) teams from each Regular Season group.

Clubs will play six games each in a round robin system (three games home, three away), with the first two teams in each group qualifying for a Final 8 tournament that will conclude the 2020-21 season.

The Final Eight will take place on the first week of May 2021. The location will be determined after completion of the Play-Offs.
The final event will be hosted in one of the eight qualified club's arena.

More details on the Final Eight are available in the Article 19 of the Regulations.