There is much to savor from the 2020-21 Basketball Champions League. The competition gave the fans plenty of inspirational moments to discuss. In all, the fifth season registered a 6% increase of fans, more than 30 million video views and reached more than 235 million fans  through social media over the course of this season. The Final Eight in Nizhny Novgorod itself has generated a ton of excitement, triggering more than 3.2 million of video views, and reaching 24.5M fans.

You guys do a great job on social media, probably one of the best in Europe. The engagement between fans and players is great, and your content is very entertaining. "We are extremely pleased to see the competition confirming its massive success on social media. At the end of the season, there are close to 2.5 million followers of the BCL on its various platforms. The digital output of the first five seasons is impressive. We are very proud of such an achievement, and to see so many fans appreciate and interact with our content," said Patrick Comninos, the CEO of the Basketball Champions League. "The BCL has been an awesome event to be a part of," said Rasheed Sulaimon from Casademont Zaragoza. "These last two years, I've seen the competition continue to get better as well as the publicity for its teams and players. The social media aspects of it has really helped a lot. My friends and family back in the United States are well informed with my teams progress and personal success. They love watching the highlights and sometimes even know what's going on throughout the league better than I do! Finally, it's been a pleasure that they can actually watch the games too. That's something that I've been trying to provide for them in our domestic leagues, which are hard to find. But every single BCL game can be streamed and watched via YouTube and I am so grateful for it! Continue the great job and promotion!," he added.

Eventually, www.championsleague.basketball generated close to 3.6 million visits (18% increase) in the course of the 2020-21 campaign with fans eager to read features and interviews about star players. The Basketball Champions League Instagram platform alone rose by 15% compared to last season.

I think you guys do a great job. In my opinion, better than a ton of other leagues that I’ve seen. I think you guys promote teams and players very well and also get highlights and things out very fast. I really love the way you guys work, how you promote games and players. You guys do an awesome job!

The Basketball Champions League sixth season gets under way on October 4, when 32 teams will contest the Regular Season and the coveted 1M€ prize money reserved for the end winner on May 15, 2022. 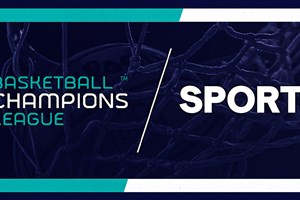