MIES (Switzerland) - Thursday night turned out to be an excellent time to play on the road, as the majority of the first-leg clashes in Qualification Round 2 ended in victory for the visiting team.

🚨 Thursday night turned out to be an excellent time to play on the road! #BasketballCL

Six of the eight games saw the away side earn the upper hand in the tie and the only teams to go against the tide by winning in front of their home crowd were Karhu Basket and Falco Szombathely.

Let's have a closer look at all eight Gameday 1 clashes in Qualification Round 2.

Finnish champions Karhu Basket put on another excellent offensive display at home to clinch a 93-82 victory over Polski Cukier Torun. In their previous home game, in Qualification Round 1 action, Karhu had scored 93 points to record a 7-point win over Tsmoki Minsk.

On Thursday, Karhu enjoyed a fantastic shooting night from long distance, as they connected on 15 of their 27 shots from behind the arc, and led by as many as 16 points. The Polish visitors on the other hand hit only 33 percent of their shots from downtown.

Torun chiseled the deficit down to four points late in the third quarter but Samme Givens drilled a three-pointer with 1:13 left in the period to make it 68-61 for the hosts, who managed to keep their guests at arm’s length in the final stanza.

Givens led the way for the winners with 20 points on 8 of 14 shooting from the floor, and 5 rebounds, while Cameron Jones made an all-round contribution with 17 points, 6 rebounds, 6 assists and 1 steal. Torun’s Chris Wright finished with a game-high 25 points and Aaron Cel had 18 points and six rebounds.

The Hungarian champions celebrated in front of their home crowd on Thursday a 75-69 win over Ventspils, albeit the visiting Latvian side will be content for reducing the deficit to just six points after trailing by as many as 15, 47-32, halfway through the third frame.

Falco forced their guests to turn the ball over 17 times, and scored 25 valuable points off those turnovers. Ventspils showed admirable composure in the final 52 seconds however, when they forced Falco to commit a couple of mistakes and scored the last 4 points in the game.

Hungarian international Zoltan Perl was in inspirational form for the winners and finished with a game-high 22 points and 7 assists, while Juvonte Reddic chipped in with 17 points and 3 boards. Wes Washpun had 21 points and 6 rebounds for Ventspils in a losing effort. 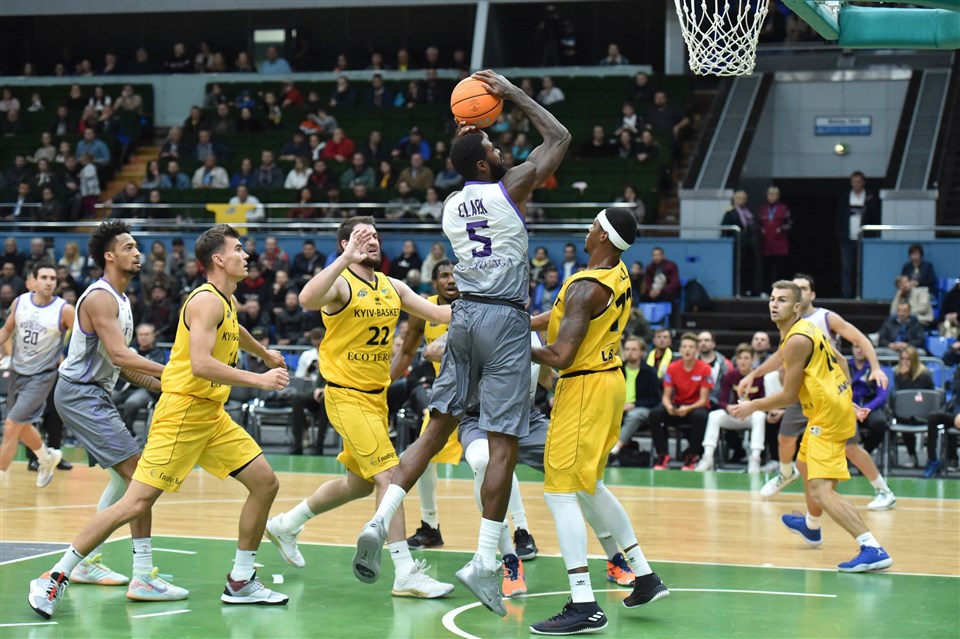 San Pablo Burgos pulled away in the fourth quarter and held on down the stretch to claim an historic 86-83 win over BC Kyiv Basket in Ukraine, in what was the Spanish side’s first-ever contest in a European game.

The game had featured 16 lead changes until early in the third frame, when the visitors established their first meaningful lead and Burgos extended the gap to 14 points, 84-70, on an Alex Barrera triple with 3:28 left on the clock. Kasey Shepherd however instigated a late fightback by the hosts and Kyiv could have even tied the scores at the final buzzer, but a desperation three-point attempt by Kyndahl Hill bounced out.

Veteran big man Earl Clark had 14 points, 5 rebounds and 3 assists to lead a balanced Burgos offense, as five players scored in double digits for the Spanish team,  with Brazilian sharpshooter Vítor Benite scoring 12 points on 4-of-5 from behind the arc. Shepherd finished with a game-high 20 points and 7 assists for Kyiv in a losing effort.

"We are satisfied with the victory because it’s not easy to win in Europe and we had lots of ups and downs during the game, both offensively and defensively," commented San Pablo Burgos head coach Joan Peñarroya. "The fact that we could not maintain the 14-point advantage left us a bad taste, but it shows that Kyiv is a good team that can hurt you if you relax or get distracted. On Sunday we have a good opportunity to qualify but we have the play better and make less mistakes, especially on defense. We’re now thinking about the trip back home and preparing for a game that is very important to our club."

.@BCLietkabelis pull off a big comeback in the 4QT (31-3) to grab a precious 16-point victory in 🇨🇾 vs Keravnos! #BasketballCL

Lietkabelis pulled off a monumental comeback in Cyprus on Thursday as they trailed Keravnos by as many as 21 points but outscored their hosts 31-3 in the final quarter to claim a 71-55 victory.

The Lithuanian side, down by 17 points at the halftime break, started chipping away in the third frame and used a blistering 21-0 run at the start of the fourth to turn the tables on Keravnos and grab a 61-52 lead with 4:30 let on the clock.

The winners controlled the battle on the glass, out-rebounding Keravnos 47 to 36, and they also made the most of their frequent trips to the charity stripe, sinking 20 of their 26 free-throw attempts.

Ken Brown led the way for Lietkabelis with 22 points and Martynas Sajus registered a double-double of 13 points and 11 boards. Mohamed Abukar finished with 12 points and 5 rebounds as the only Keravnos player to score in double digits. 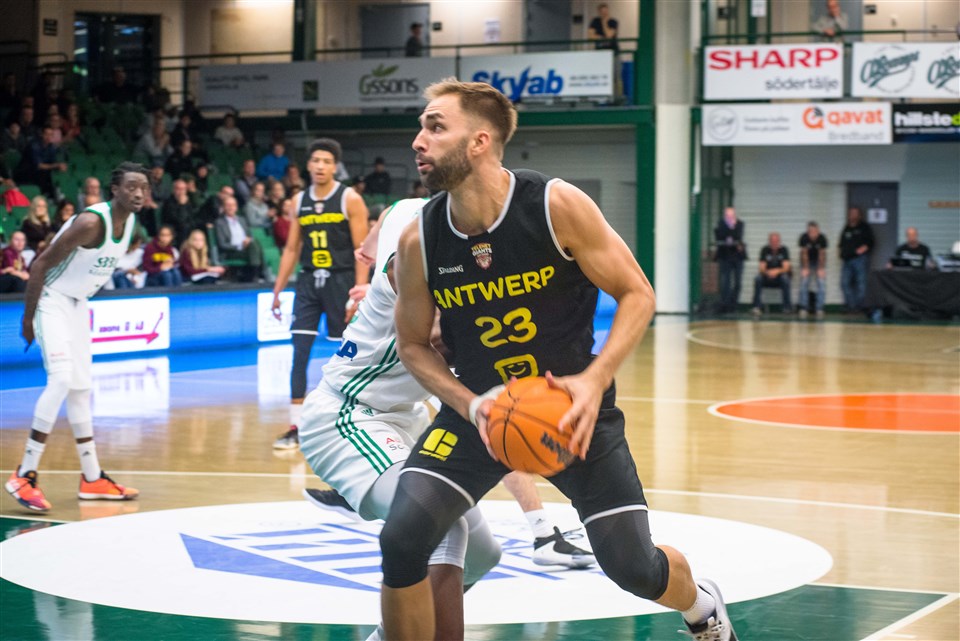 The Belgian hosts of the 2019 edition of the Basketball Champions League Final Four raised the curtain on the new season in spectacular fashion, as they rolled over Södertälje Kings 82-60 on the road to raise their chanches of qualifying to the Regular Season for a second year in  a row.

The Giants came out guns blazing, raced to an 18-0 lead and never looked back. The visitors extended the gap to as many as 28 points in the third frame and it is indicative of their offensive flow that they dished out a collective 20 assists, compared to the Kings’ 10.

Owen Klassen finished with 18 points on 8 of 9 shooting from the floor to lead 5 Antwerp players in double digits, with Dave Dudzinski adding 14 points and 4 rebounds. Charles Callison had a game-high 22 points for the Kings in a losing effort.

Nizhny Novgorod came up with a solid defensive display to secure a valuable 74-61 win over Legia Warszawa on the road, albeit the Polish side reduced somewhat a deficit which had ballooned to 21 points early in the fourth quarter.

The Russian side grabbed the lead shortly after tip-off but only managed to pull away by double figures in the third stanza and Darrlyn Willis converted a three-point play with 7:15 left in the fourth frame to stretch the gap to 67-46. The hosts went on a 15-3 mini-run to cut the deficit to 70-61 going into the final seconds, but Nizhny scored the last points to push the final difference back into double figures.

Nizhny’s Brandon Brown registered an efficiency rating of 33, the highest anywhere on the night, as he poured in 24 points on 9 of 13 shooting from the floor and came up with a remarkable 8 steals, also adding 5 rebounds and 5 assists for good measure. Sebastian Kowalczyk had 22 points on 3 of 4 three-point shooting in a losing effort.

Telekom Baskets Bonn led Fribourg Olympic by as many as 30 points on Thursday and held off a very late rally by the Swiss champions to clinch an 80-66 triumph on the road and take a 14-point cushion to the second leg in Germany.

The visitors, who led from start to finish, raced to a double-digit gap, 17-7, before the end of the opening quarter and never allowed their hosts to reduce the difference to single figures again. A Trey Mc Kinney Jones lay-up with 6:30 left on the clock pushed the gap to 30, 71-41, and somewhat surprisingly prompted a 25-9 burst by Fribourg until the final buzzer.

Bonn scored 30 points off Fribourg turnovers while the hosts only scored 16 points from their guests’ mistakes, despite the fact the two teams turned the ball over almost at the same rate, 21 times and 22 times, respectively. Benjamin Simons paced the winners with 23 points on 5 of 8 shooting from behind the three-point arc while Xavier Pollard finished with 15 points and 8 rebounds for Fribourg. 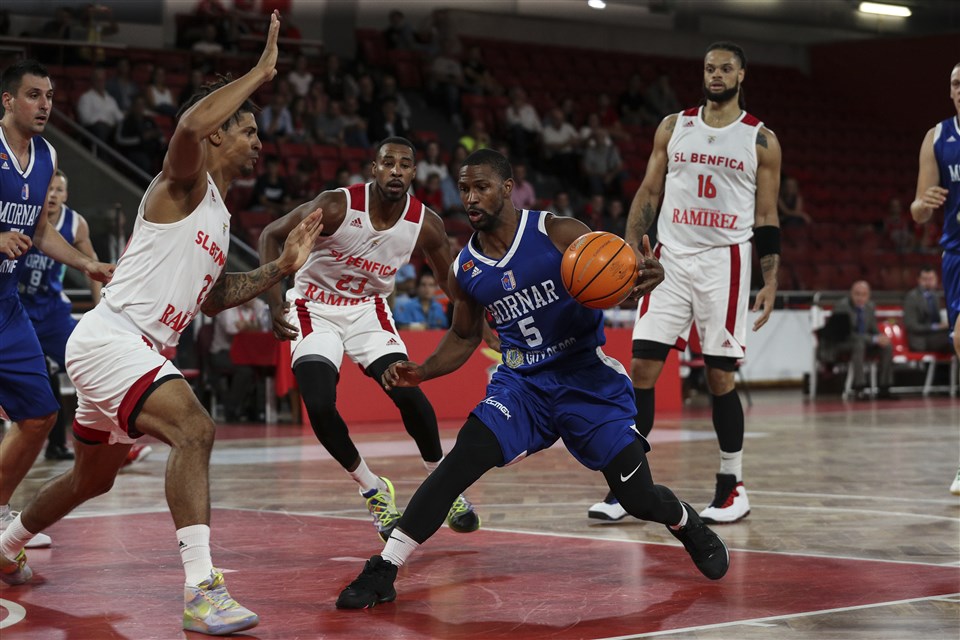 Derek Needham had 7 points, 9 assists and 7 rebounds for Mornar

Montenegrin side Mornar Bar pulled away decisively in the fourth quarter of its clash with Portuguese champions Benfica in Lisbon to clinch the widest-margin road victory so far in this season’s qualifying stages, 96-68.

Mornar used a 10-0 run in the second quarter to wrestle away the lead from their hosts by pushing ahead 31-28 and stayed in the driver’s seat for the rest of the way. The Montenergin team stretched the gap to 15 points, 58-43, on a Milko Bjelica jumper with 6:05 remaining in the third quarter. Benfica attempted a comeback towards the end of the period and reduced the gap to six points momentarily, but Mornar switched into top gear with the start of the final frame.

The visitors scored an eye-turning 31 points on the fast break, while the hosts got only 6 of their points in transition. Veteran point guard Jacob Pullen paced Mornar with a game-high 29 points on 9 of 17 shooting from the floor, including 6 made threes in 13 attempts. Bjelica finished with 18 points and Damir Markota chipped in with 17 points off the bench. For Benfica, Damian Hollis had 15 points and 6 boards in a losing effort. 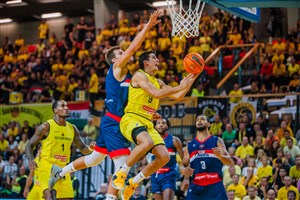 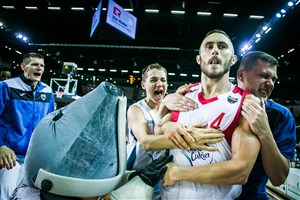