Yellow 32 dribbles the ball in the middle of the court and defensive player Black 33 tries to stop him. Black 33 moves on the side on the last moment and the contact is initiated by him. This is an illegal contact by the defensive player (blocking foul).

White 35 has the ball after the rebound and attempts to make a shot close to the basket. Defensive player Black 4 tries to block the shot by keeping his hands straight up, but instead, he is taking one step forward and, at the same time, leaning his hands forward out of his cylinder. This is an illegal contact by Black 4 and a personal foul should be called on him.

Black 7 dribbles the ball towards the end-line and White 13 tries to stop him by footwork. The contact is caused by Black 7 going towards White 13 who is doing nothing wrong, but legal defense. The contact that took place is considered marginal and no foul should be called on this play.

Black 10 drives to the basket and the defensive player White 18, helping defense, tries to block the shot. White 18 is able to reach to the ball, which is totally legal and no foul should be called.

Black 21, in the low post, starts to drive to the basket when Yellow 32 creates an illegal contact. Black 21 gathers the ball when his right foot is on the floor and after that, the illegal contact is created by Yellow 32. The foul, correctly called, is in the act of shooting foul, the determining factor in the continuous motion is when the player gathers the ball. The basket should be valid and 1 additional free throw be awarded to Black 21.

Outcome: Incorrect decision by referees (not counting the basket and 1 free throw). 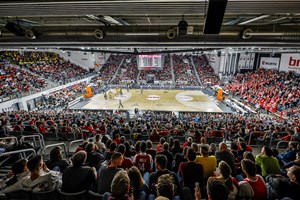 Last Power Rankings of the season: Winners in Top Four ahead of the Final Four 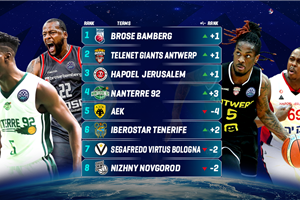