MIES (Switzerland) - On Wednesday the 27th of March, two of our clubs will simultaneously do something that neither has managed before: compete in a Basketball Champions League Quarter-Final. Not only that, but they will also be the first clubs from their respective countries to play in a Quarter-Final as well - and thus guaranteeing that we will have another new country represented at the Final Four in May. Let's take a closer look at the two teams and dive into what is possibly the tightest and most unpredictable tie in the Quarter-Finals.

Antwerp: If Antwerp does make the Final Four they could never be accused of taking short cuts or being a beneficiary of a lucky draw. The Giants climbed on board in the first round of qualifying! From there, they were drawn into Group C. The simple fact that all four teams that made the Round of 16 from Group C are still in the Quarter-Finals, tells you everything you need to know about the challenge they faced. Antwerp is our youngest squad and probably our most fearless. As evidenced by their standout win of the season, when they comfortably beat Jerusalem in Antwerp. They went from strength to strength from there, finally qualifying with a 7-7 record. We were with them the day of the Play-Offs draw and instantly it was clear that the level of challenge wasn't going to let up in the Round of 16.

📽🍿 @AntwerpGiants gave us exclusive access on the day of the Play-Offs Draw!

The young Giants proved their fearlessness again as they knocked off UCAM Murcia - an ACB team with a much bigger budget and a strong contingent of returning players from last year's Final Four squad. Nobody personified the Antwerp culture more than PG Paris Lee. Lee has taken a huge jump in his second season at Antwerp. The way he dominated Murcia's veteran backcourt in the first leg may have been his best performance to date, and will certainly have turned heads across Europe.

Nizhny:Coach Lukic's  Russian soldiers have also had it far from easy. Nizhny came through from the first round of qualifying as well, knocking out perennial BCL'ers  Aris in the process.  In the Regular Season, Nizhny was drawn in Group A. Maybe not a group boasting the likes of AEK, Jerusalem, and Bamberg, but in UCAM Murcia, MHP Riesen Ludwigsburg and Banvit they faced three teams with Final Four pedigree in the BCL. Add to that the French Champions Le Mans, Norris Cole with Avellino, a dangerous Anwil squad and Ventspils, Coach Lukic and his squad had a tough road ahead. A road that got tougher through injury, as they lost Kendrick Perry and several other key players at different times during the season. But make it they did and in style at the end - an emphatic win in Germany put the league on notice that Nizhny Novgorod is a dark horse threat.

In the Round of 16, Nizhny drew Umana Reyer Venezia. The drama kings from Venice were no strangers to Coach Lukic and his squad. Having beaten Nizhny en route to winning the FIBA Europe Cup last season, the Italians came into the game as favorites. This Nizhny team and their leader Kendrick Perry don't care much for favorites and form books though. Perry effectively ended the contest on the first leg. 34 points, 6 assists and just way too much sauce for Venezia in Russia. Almost all of his handy work was done in simple high pick-and-roll actions. It was a clinic in how to start, stop, pop and go.

We don't need to dive too deep into the stats to see how even this matchup is.  When we look at which zones on the floor each team is most efficient when it comes to shooting, we see a perfect 5v5 split. We can, however, discount two zones for Antwerp; right corner 3-points and left-wing mid-range. At 30% and 28% respectively, neither areas are efficient shooting zones. Also worth noting is that the two areas that Nizhny won behind the arc, are much more efficient at 41% and 45%, than Antwerp's hotspots at 34% and 35%. Finally and perhaps most importantly is Antwerp dominating the paint, shooting 70%. Ismael Bako is one of the league leaders in paint scoring, with most of them coming from dunks. For Nizhny, finding a way to slow down those lobs and putback jams will be vital. 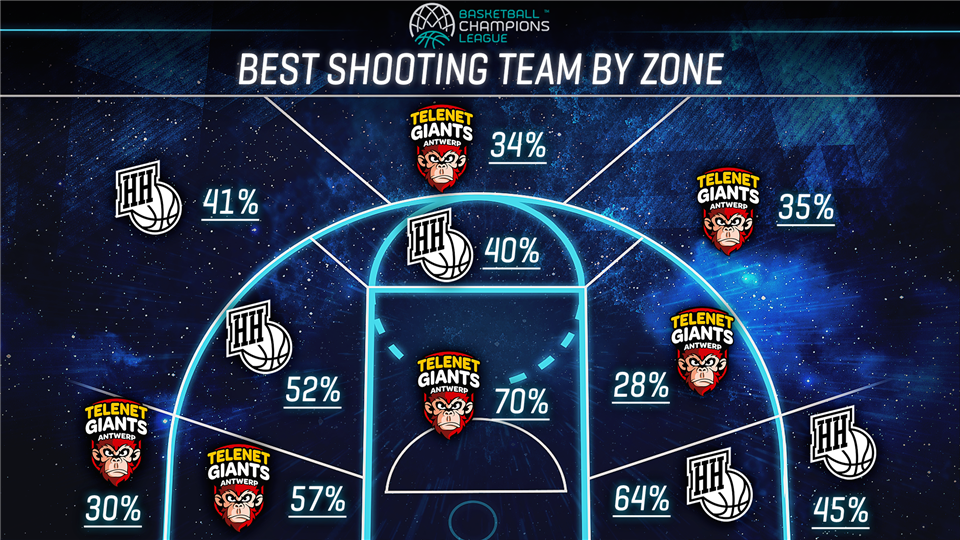 Again, we see the consistent theme of a matchup that projects to be extremely tight. Antwerp holds a single percentage point advantage for FG%, eFG% and also for TOV%. That advantage for TOV% translates to exactly one more turnover per game. Nizhny shoots the ball 2% better from the FT line. These kinds of margins could easily see the matchup decided by an extra possession after a late-clock turnover, or the difference between two made FT's.

It's almost a cliche to say that roster continuity matters, but when you look at Antwerp's budget and then contrast it to their achievements, it's almost predictable that their rotations are as stable as the chart below demonstrates. Never underestimate the power of closeness, bonding, and familiarity in a group of people working towards a collective goal.  Look at the darker green areas that highlight when a player has been on court more, you can clearly see a starting unit and second unit.

You can also see Jae'Sean Tate often applied as the bridge between the two units, playing through those gaps between 1st and 2nd, then 3rd and 4th quarters. Victor Sanders also has an understated role in this rotation. His minutes are mixed between holding the fort when Paris Lee sits and also playing with him. Sanders is second behind Lee is Usage%, so it's also clearly not a case of him just giving up the rock when the two share the floor. We often refer to a player's character or doing the little things when we use the term "Glue-Guy". In this case, Sanders and Tate are the rotation glue-guys.

Key Players: For Antwerp to win, they will need contributions from everywhere. As we saw in the closing stages against UCAM Murcia, almost everyone on this team is willing to get into attack mode.

But without question, Paris Lee, Jae'Sean Tate, and Ismael Bako will be the men that Antwerp most need to deliver. On most occasions this season they have.

This Antwerp team is young and like most young teams they want to beat you with energy. They just keep coming at you and nobody personifies that as much as Paris Lee. Where he leads, Antwerp follows - both good and bad. Watch the two clips below, both Start with Lee making excellent reads on defense and coming up with the steal. Then you see Paris Lee doing Paris Lee things and getting the ball up the floor pronto. The first clip he betrays his second season in Europe and pulls on an early 3-ball. Sure, his crossover had created separation but that wasn't the best shot available. In the second clip his decision is more mature. He uses the ball screen and reverses the ball against a defense that is still scrambling because of the speed he was able to push the ball upcourt. Antwerp creates and makes an open corner 3. If Murcia couldn't hang with them when they get it right, who can?

Lee's primary role has to be setting the tempo and creating advantages, but you can also say with a high degree of certainty, when the game is close and they need a bucket, Lee will likely have the ball in his hands.

If Antwerp's rotation is a picture of stability. Nizhny's is almost completely antithetical. Although, it has to be said, probably not by design. Injuries have been a consistent subject matter in Novgorod and that fact is clearly visible when you can see eight players that have regularly been given starting roles (nine including Odom who is not on this chart).

What you can discern is the value of Ivan Strebkov's versatility. Kendrick Perry and Evgenli Baburin play traditional starters minutes (although Baburi doesn't close games). Strebkov, however, has his minutes evenly spread across the board. Of anyone, his role seems to have changed the most but his importance and minutes have never dropped, neither has his presence on the court in the closing stages of the 4th.  The two other ever-presents in the closing lineups are Kendrick Perry and Anton Astapkovich.

Key Players: For Nizhny, it has been a collective effort all season but the main men on the offensive end have been Kendrick Perry, Ivan Strebkov, and Vladimir Dragicevic. We are unlikely to see that change in this Quarter-Finals tie. Another man that could join that group is Ian Hummer. The American has been a late arrival but a welcome one. David Hein wrote about his journey to arrive at Nizhny this season, but his mobility and athleticism may be vital with Coach Lukic searching for matchups for Ismael Bako.

Without question, the main man on this Nizhny team is Kendrick Perry. We already looked at the way he took control of Venezia in the high pick-and-roll, and we have seen him hit big shots right from the start of the season.

The UNREAL shot from @Kendrick3Perry to send the game to Double OT! #BasketballCL

Maybe the best part of Perry's game is his defense. We asked coaches and players from around the league about the players they viewed as the best defenders in BCL - his name came up on multiple occasions. It's more than that though. Perry turns defense into offense as fast as anyone in the league (including Paris Lee), and he does it with unerring regularity, every game.

If Point Guard battle in the matchup is blockbuster, then the coaching battle is equally so. Coaches Lukic and Moors both have to be front runners in the Coach of the Year award considerations. Both have also featured consistently in our Tactics Board features.

This set after a timeout from Roel Moors, where he sent Paris Lee to use his own defender to screen Ismael Bako for the lob, was an outstanding draw up:

Coach Lukic can see any Roel Moors back screen for a lob and raise you one of his own. The set in the video below is one we haven't seen Nizhny go to for a while. Watch how they use a false, side pick-and-roll to discombobulate the help defense positioning, then empty the strong side corner as they reverse the ball. Then finally they get into the back screen for the lob. Oustanding stuff!

No matter where you look, this tie is unthinkably difficult to call. The two teams have almost identical statistical profiles, have both come from the very first round of qualifying, have both got outstanding Point Guards that will play both ends and push the tempo, have both got outstanding coaches and they have both got the hearts of most neutrals as they both carry that underdog spirit. We could try and make a case for one of these squads to be slight favorites but it would be spurious at best and what would be the point in that?

For the neutral, this matchup is fascinating viewing. For the fans of both clubs, there has to be an equal amount of excitement at the idea of being so close to a Final Four, but also a healthy chunk of fear of being shut out, right at the doorstep. Especially as both sets of fans will feel they have a legitimate chance - neither is the favorite, but that also means that neither is the underdog and for both teams, that means yet more uncharted water in a season of first times. 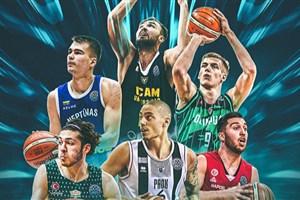 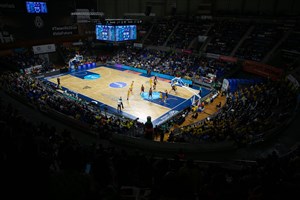