LONDON (England) - There has been consistent chatter throughout the season about this year's MVP award. The likes of Vince Hunter, Tyrese Rice, and Kevin Punter have all had stellar seasons. The AEK dunk man is the consensus pick at this stage, but if Tyrese Rice continues to put up show-stopping numbers, the contest could get a lot tougher to judge, in a hurry - especially considering that AEK and Bamberg matchup in the Quarter-Finals and the two men have the chance end each other's Basketball Champions League campaigns. 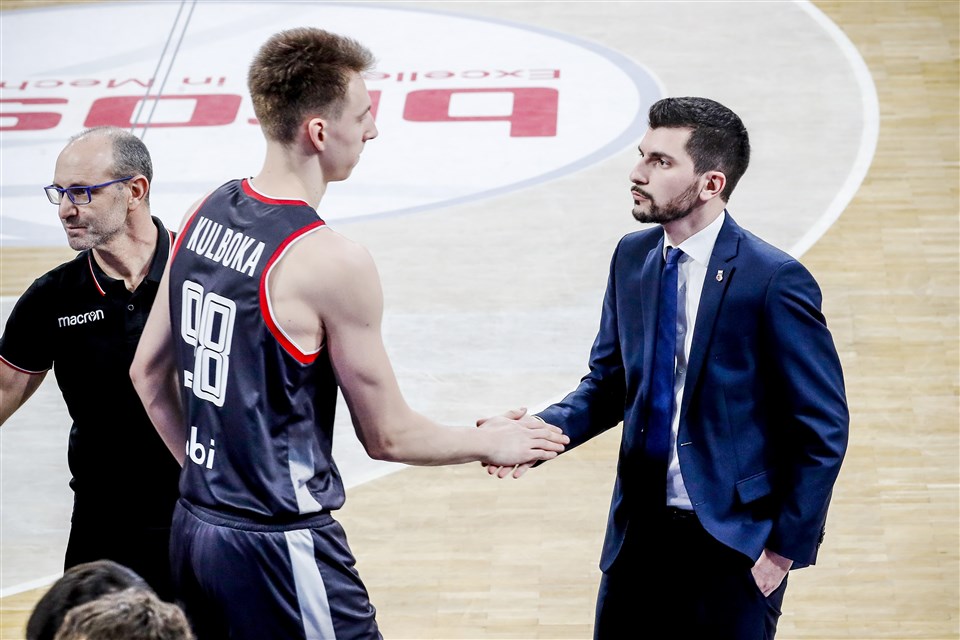 Speaking of Bamberg and end of season awards, the Freaks already have one of last year's winners on their roster. Arnoldas Kulboka - whilst on loan to Orlandina in Italy - was the second winner of the Basketball Champions League's Best Young Player Award. This year, Kulboka is back at Bamberg and we have a host of new candidates aiming to follow in his footsteps. As a reminder, to win this award we are looking for players that are 21 (1997 born) or younger, and to get a closer look at the runners and riders, I have drafted in some help. David Hein (@heinnews) is our podcast host and has also written an excellent series on the 'Home Grown' talent in the BCL. Igor Curkovic (@IgorCurkovic), well you all know him already....Power Rankings, Help-side columns, and general BCL musings. He's also known to write about the odd FIBA youth tournament and had warned us about his compatriot Luka Samanic long before he was dunking on people in Slovenia this season.

I tried to get the other guys to use the "Luka SLAManic" caption, but they voted no. I don't care, Luka SLAManic lives on in my head. #Ajmooooo https://t.co/gAHoDyoON8

Before we give you our views on who stands the best chance of climbing the steps to collect the award at this year's Final Four, have a look at the stats for yourself. Click the tabs, tick the player names in the filters, make your own comparisons and draw your own conclusions. You have three main tabs to choose from; Per Game and Per 36 minutes, Shooting percentages and Advanced Stats, then finally an isolated look at Tamir Blatt and Luka Samanic as two of the strongest candidates, but also players who produce numbers in stark contrast.

@IgorCurkovic: For some time now, we've been saying here in Croatia that basketball will survive this horrid period by being passed on from one generation to another, inside the family. We've had our Sarics and Zizics, and we are waiting for the Prkacins and Perasovics. Samanic fits the scheme here because his father Marko was also a professional basketball player.

But, if you saw the two, Marko and Luka, together on the court, you would never say they are father and son. Marko was a tough, strong, back-to-the-basket lefty center, whilst Luka is a high flying, sweet shooting four or a five, giving you a golden option if you decide to switch all on defense. That's what makes him an elite prospect in modern day basketball. He'll hang around the faster guards, and he'll stand his ground against the bigger guys.

Then, of course, there's this:

Samanic started the season slow, due to the learning curve of becoming a professional after dominating youth competition. But, the coaching change from Zoran Martic - in whose offensive system Luka was barely used, using dribbles only when he's a part of the dribble hand-offs to start the "weave" plays - to Sasa Nikitovic gave Samanic a lot of freedom on the offensive end.

He finished the season getting to double digits in five of his last six games, and the one, when he scored less than ten points, was against Bayreuth...and he scored 9 then. His growth was more than obvious and having the freedom gave him the opportunity to show his basketball brains and smarts.

Luka Samanic (2000) growing up. Recognizing the mismatch, taking his time, having the patience to make his move...two of his 10 first half points vs Bologna, also had a dribble drive hook, alley-oop layup, putback layup and a couple of free throws pic.twitter.com/S1jnK6W7R0

So don't look at Samanic as an 8.2-point, 5.0-rebound guy for the season. Think of him as a 13.2 PPG, 6.7 RPG player, which he was over the last six games. For someone born in 2000, those are elite numbers, and for me, the only question mark about Luka winning the award is the team record.

Petrol Olimpija had the league-worst 13 defeats in the Regular Season, despite hanging around and blowing double-digit leads almost every week. Is a Best Young Player of the Season winner really on that kind of a team? That's why the jury is still out on Samanic winning it.

@DLScoaching: At 21, Koniaris is almost a veteran of Best Young Player awards. Since winning the 2017 European U20's with Greece, and making the All-Tournament team in the process, Koniaris has been widely regarded as one of the most talented European guards in his generation. He was on the list of candidates to win this award last year as well.  Koniaris' minutes have been reduced since last season but his efficiency has gone up. 48.7% from deep and an eFG% of 65.3% makes him the most efficient shooter among the candidates this year. 4.4 assists per 36 minutes is also a good indicator of his ability as a playmaker. In the video below you can see his patience and maturity when passing the ball in the pick-and-roll. You can also see the streetball instincts that make him a dangerous shot-maker, especially off the dribble.  At 1.92m he is a solid rebounder for a guard and he competes on the defensive end on every possession. If anything it's only his role, or ability to win a bigger role at PAOK that is preventing Koniaris from winning this award.

If it isn't Koniaris' year to collect awards this time around, there is no doubt his time will come. A combination of skill, competitiveness, and the nerve to hit big shots in big games are a great combination of traits to have.

@heinnews: Despite his age, Hazer is already playing his second season in the BCL and that experience and added confidence was on display. He showed that he can run the point a little with excellent first-step quickness and good vision to know where his teammates will be waiting. He also can take that explosiveness and finish at the rim. His shooting range is solid but not spectacular but he makes up for that with supreme confidence in his abilities.

Check the Home Grown piece for more on Hazer!

@heinnews: Cate knows exactly what he can and cannot do and he excels at the things he can. The Romanian learned well in the youth ranks at Spanish powers Real Madrid and even won the ANGT title with Madrid in 2015, collecting 11 points, 8 rebounds and 8 blocks in the Championship Game (playing alongside Luka Doncic). Another of Cate's biggest strengths is his efficiency and he has excellent footwork around the basket. Cate has blossomed with more playing time in Murcia and showed all season that he will be a force with which to be reckoned.

Check the Home Grown piece for more on Cate!

@heinnews: Neptunas was a perfect situation for Masiulis, who came to Klaipeda on loan from Zalgiris Kaunas. Masiulis was able to take his game to a different level with actual playing time, which the 20-year-old could not get with Zalgiris. The son of a former Lithuania national team stalwart, Masiulis also is using his time with Neptunas to become more of a versatile player as it's clear he cannot play solely in the post at the next level because of his size. Masiulis shot 32 percent from three-point range this season, which is a good first step and while he showed flashes of a good passing game, that will need to come more. But Masiulis showed all season that he can move well, both away from the ball and on the break.

Check the Home Grown piece for more on Masiulis!

@DLScoaching: There is no such thing as runner up for this award but if there was, Tamir Blatt would've been it last season. This year, the Jerusalem playmaker has to be the standout favorite. He plays the most minutes and has the biggest role and is putting up the most impressive numbers on a regular basis. 10.9 points and 7.1 assists (10.4 per 36) are very impressive numbers for 21-year-old Point Guard that is leading one of the most high powered offenses in the Basketball Champions League. Those 7.1 assists makeup 42.1% of all of his team's assisted field goals when he is on the floor - put simply Tamir Blatt runs the show on the offensive end.

Watch the video below and you will see everything you could want offensively in a Point Guard. He really has shown us the full arsenal this season (making the team of the week twice in the process).17 points and 8 assists against Bamberg probably stands out as his best game so far. He's shooting the 3-ball above 40% and has always been able to hit them off the dribble. Then there is the passing... Blatt passes the ball with flair but if anything, his distribution has been more about surgical precision this year - those lob passes look fresh but they have become more of a science than art. The likes of Josh Owens and Amar'e Stoudemire know that if they make the effort to get in the right area, Blatt is delivering and rewarding that effort.

This next video has a pass that was so underrated and has to be up there with the passes of the season. Watch how he uses the ball screen to create an advantage, then manages to change his angle to face the basket and also keep his defender in jail behind him at the same time. Then he scans the floor to see that the help on the roller  has come from the high defender, meaning that Stoudemire will be open later on the roll. Blatt is patient and waits for the slightest of angles to make an unbelievable wrap-around pass for the easy finish. The vision and poise are excellent and the pass is a thing of beauty but perhaps more impressive is that was the only pass that he could've made in that situation and he still made it look easy. 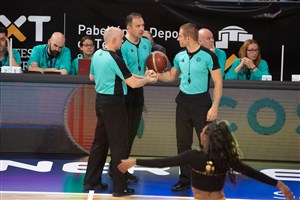 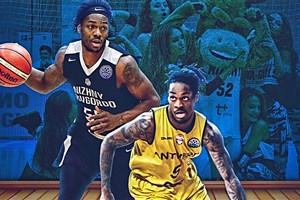