With eight different nations represented in the next round; Belgium, France, Israel, Italy, Germany, Greece, Russia and Spain - there will be a week break in the schedule before the action continues.

Here's a round up of Wednesday's action:

Tyrese Rice put on a show to lead Brose Bamberg through to the Quarter-Finals with an 88-85 second leg victory over Banvit, for a 169-165 aggregate win.

Rice went off for 32 points on 10-of-20 shooting, whilst Ricky Hickman went 5-of-5 down the stretch to ice the game

Augustine Rubit added 14 points, and Hickman joined them in double figures with 11.

For Banvit, Jordan Morgan had a 23-point and 14-rebound double-double, Gary Neal had 18 points but was held to 5-of-18 shooting, Alex Perez had 12 points and 8 assists.

Bamberg will now take on AEK in the Quarter-Finals.

Notable Number: 93.5 - Bamberg knocked them down from the line with remarkable accuracy, finishing 29-of-31 from the stripe.

Defending champions AEK are back in the Quarter-Finals after getting a 146-138 aggregate win over PAOK, despite losing the second leg 63-62.

PAOK needed a double digit win to advance, and despite leading by five towards the end of the third quarter, it was as big of a lead as they would get.

Vince Hunter had 11 points and 7 rebounds to lead AEK, and Jonas Maciulis joined him in double digits with 10 points.

Johndre Jefferson had 11 points on 5-of-6 shooting along with 9 rebounds to lead PAOK,  Evangelos Margaritis and William Hatcher added 10 points apiece.

AEK will take on Bamberg in the Quarter-Finals.

Hapoel Bank Yahav Jerusalem cruised into the Quarter-Finals with a 84-64 win over Neptunas Klaipeda for a 170-138 aggregate win.

Jerusalem took control in the first quarter and held off Neptunas the rest of the way, and pulled away for good in the fourth quarter.

Jerai Grant led Neptunas with 14, and Simas Galdikas had 12 for Neptunas.

Notable Number: 67.5 - the percentage Jerusalem shot from inside the arc, as they converted with remarkable efficiency.

Iberostar Tenerife dominated the second leg 79-57 over Promitheas Patras for a 136-126 aggregate win to book their place in the Quarter-Finals.

Tenerife led by as many as 25, and controlled the game from start to finish as Promitheas had no answers, despite Tenerife being without Javier Beiran.

Sebastian Saiz and Tim Abromaitis led Tenerife with 13 each, whilst Nicolas Brussino had 12, as they will take on Hapoel Jerusalem in the Quarter-Finals.

Rion Brown had 20 points for Promitheas and Tony Meier joined him in double figures with 10.

Notable Number: 14 - the number of field goals Promitheas made, a joint-low in the Basketball Champions League this season.

Segafredo Virtus Bologna cruised on their way to an 81-58 win over Le Mans, advancing to the Quarter-Finals with a 155-132 aggregate victory.

The Sasha Djordjevic coaching era began with a dominant display, as a 25-10 first quarter set the tone and Bologna led by as many as 33 to advance with little resistance.

Dejan Kravic led the Bologna scoring with 16 points, whilst Kevin Punter and Filippo Baldi Rossi had 12 each, as all 12 of Bologna's players saw court time, with 11 registering on the scoreboard.

Le Mans were led by 13 points from Michael Thompson, Valentin Bigote had 11, whilst Wilfried Yeguete finished a point shy of a double-double with 9 points and 10 rebounds.

Bologna will face off against Nanterre 92 in the Quarter-Finals.

Notable Number: 25 - the number of assists Bologna registered in a total team display.

The young Telenet Giants Antwerp improbable journey continues as they advanced to the Quarter-Finals with a 152-145 aggregate win over UCAM Murcia, despite losing the second leg 78-77.

Tyler Kalinoski converted the three-point play with 20 seconds remaining to seal Antwerp's spot in the next round, as he led the scoring with 16 points.

Murcia looked like they had escaped, leading by nine heading into the final 4:33, but they would go on a scoring drought, whilst Antwerp would mount their last charge.

Ismael Bako dunked his way to 15 points, Paris Lee had 14 and Jae'Sean Tate joined them in double figures with 10.

Askia Booker had 14 points and 11 assists to lead Murcia, Ovie Soko had 12 points and 10 rebounds, whilst Emanuel Cate had 10 and 7 blocks - a Basketball Champions League Play-Offs record, but the Spaniards' campaign is over after going 13-1 during the Regular Season.

Notable Number: 3:54 - the length of time Murcia would go scoreless for to finish the game, allowing Antwerp to pull off the upset. 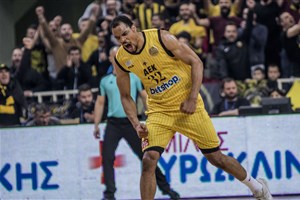