Can Antwerp prevent Bamberg from qualifying? What to know about Wednesday's games

MIES (Switzerland) - The end of the Basketball Champions League Regular Season is close, since this is week 12 already!

Brose Bamberg will clinch a spot in the playoffs with a home win over Antwerp on Wednesday night (same for Antwerp). A loss, however, coupled with a Lietkabelis win at Dijon, would leave the German club still on the outside of the post-season looking in.

With three Gamedays remaining, Bamberg have a one-game lead over the Giants while they are three clear of Lietkabelis. The Lithuanian club would win a head-to-head tiebreaker with Bamberg due to better goal differential if they were to finish with identical records.

Here are a look at Wednesday's games. 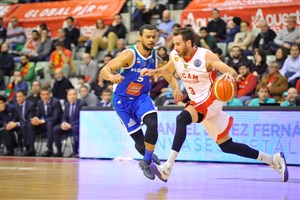 UCAM Murcia seal top spot in Group A - Gameday 12, Tuesday Round Up