Here are the procedures for the Draw:
The 2018-19 Basketball Champions League competition will consist of 32 teams. Twenty-six (26) teams are directly qualified for the Regular Season, with the last six (6) teams set to qualify through three Qualification Rounds.

During all stages of the draws, the country protection principle will apply, safeguarding that no teams from the same country face each other, either in the Qualification Rounds or in the Regular Season.

The competition starts on 20 September 2018 with the first of the three Qualification Rounds. Qualification Round 1 (QR1)
Twenty-four (24) teams will be split into four pots (A, B, C and D) according to the Basketball Champions League club and country rankings, and will be drawn into twelve (12) pairs.

Games will be played home and away on 25 and 28 September. The 6 winners will then qualify for the 3rd Qualification Round (QR3).

They are qualified directly for the third and last Qualification Round (1 and 4 October). They will face home and away the six (6) winners from QR2 (unseeded teams). These directly qualified teams will play the return leg at home.

The six (6) winners of Qualification Round 3 will qualify for the 2018-19 Basketball Champions League competition and join the 26 directly qualified teams in the main draw.

They will be joined by the six (6) winners of QR3. The thirty-two (32) teams will be placed into four groups of eight (8) teams. The Official Draw Ceremony will be streamed live on www.championsleague.basketball from 11.00 CET. 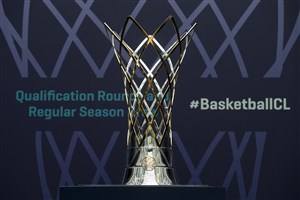