UCAM Murcia seal top spot in Group A - Gameday 12, Tuesday Round Up

MIES (Switzerland) - Gameday 12 tipped off on Tuesday evening, as UCAM Murcia sealed their place atop of Group A, whilst a Basketball Champions League scoring record was broken.

Banvit overcame a record-breaking performance from Kiefer Sykes to secure a 96-88 victory over Sidigas Avellino.

Despite Banvit getting the win, it is Sykes who is the talking point after exploding for a Basketball Champions League scoring record of 43 points. The previous record was 42, scored by both Jimmy Baron and Martin Zeno.

Stepping up for a short-handed Avellino side, Sykes went 10-of-13 in the first half for 28 points, cooling off in the third before getting going again down the stretch but it would not be enough for Banvit who prevailed with their depth.

Jordan Morgan had a dunkfest on his way to 24 points for Banvit, Gary Neal had 18, and McKenzie Moore finished with 13, 7 rebounds and 6 assists.

Banvit have all but secured the second spot in Group A, and they can still win the group if UCAM lose all of their remaining games, and Banvit win all of theirs.

Notable Number: 56 - the number of points Banvit scored in the paint as they dominated inside, shooting 63.5% on two point field goals.

Jerusalem put triple digits on the board for impressive 111-80 road victory over CEZ Nymburk, winning every quarter on their way to the sizeable victory.

Jerusalem finished three points off the BCL single game scoring record, building a comfortable cushion in the first half before dominating the fourth for the final margin, improving to 10-2 atop of Group C.

Martin Peterka's 17 points led Nymburk, with Bracey Wright having 15, but they fell to 3-9.

Notable Number: 29 - the number of assists Jerusalem registered, led by 7 each from Tamir Blatt and J'Covan Brown.

Promitheas Patras have all but secured their spot in the Play-Offs, improving to 8-4  with a 77-64 win over SIG Strasbourg.

A series of alley oop dunks from Octavius Ellis and scoring burst from Rion Brown in the third quarter blew the game open, whilst Strasbourg were held scoreless for almost five minutes, and to just 23 points in the second half overall.

Nikos Gkikas had 16 points to lead Promitheas, Langston Hall had 13, whilst Rion Brown and Tony Meier finished with 11 each.

Youssoupha Fall's 12 points led Strasbourg, but they fall to 6-6 and are in the thick of the battle for the Play-offs.

Notable Number: 92.3 - Promitheas shooting percentage as the foul line, as they went 12-of-13 on free throws.

Ventspils finished strong to get a 99-81 road win over MHP Riesen Ludwigsburg, improving to 5-7 and keeping themselves in the Play-Offs conversation.

Leading by just three with four minutes to play, the Latvian champions finished the game on a 21-6 burst to drop Ludwigsburg to 3-9 sitting at the bottom of Group A.

Ingus Jakovics led the scoring with 21 points, Rihards Lomazs had 19 points, 9 rebounds and 6 assists, whilst Jonathan Arledge finished with 17 and 8 rebounds. Aaron Johnson was outstanding with 11 points, 6 rebounds and 8 assists.

Kelan Martin led Ludwigsburg with 20 points, Marcos Knight had 18 before fouling out, Owen Klassen 17 and 9 rebounds, whilst Jordon Crawford had 8 assists with his 13 points.

Notable Number: +17 - the rebounding differential in Ventspils' favour, as they hauled in 15 on the offensive glass.

UCAM Murcia led by as many as 21 on their way to a 78-70 win over Anwil, sealing the first seed in Group A.

Ovie Soko had all 16 of his points in the first half, helping UCAM take their league-high 11th win of the season.

Alex Urtasun had 14 for Murcia, Milton Doyle added 13 and Sadiel Rojas joined them in double figures with 10.

Michal Michalak had 17 points to lead Anwil, and Nikola Markovic supplemented him with 16 points.

Anwil are still just one win behind the fourth spot, despite having lost four straight.

Notable Number: 9 - the number of points Murcia held Anwil to in the second period, whilst scoring 27 of their own to pull away.

Le Mans secured an 89-74 victory over Nizhny Novgorod to overturn a 14-point deficit and grab the tiebreaker in a battle for the fourth spot that is heating up in Group A.

Le Mans and Nizhny join Ventspils at 5-7 with all to play for over the last two Gamedays.

Notable Number: 20 - the total number of lead changes in a game that went back and forth throughout the first 25 minutes before Le Mans pulled away.

Telekom Baskets Bonn came up big to register a 73-69 upset win over Umana Reyer Venezia, improving to 5-7 in fifth place in Group B.

Deron Washington had 15 of his 17 points in the first quarter to lead Venezia, Mitchell Watt had 11 points and 8 rebounds, whilst Michael Bramos added 10 points, as Venezia dropped to 8-4.

Notable Number: 31:07 - the total amount of time Venezia were leading throughout the game, before Bonn stormed back in the fourth quarter to steal it.

Filou Oostende picked up their sixth straight win in the Basketball Champions League with an 82-62 win over medi Bayreuth.

The Belgian champions dominated the fourth quarter, holding Bayreuth to just 10 points, to improve to 7-5 in third place in Group D.

TJ Williams was impressive on his way to 21 points as the only Oostende player in double figures, and Chase Fieler had 9 points.

De'Mon Brooks led Bayreuth with 14, whilst Adonis Thomas had 13 and Eric Mika joined them in double figures with 11, but they fell to 4-8.

Notable Number: 95 - Oostende's shooting percentage from the foul line, as they finished 19-of-20. 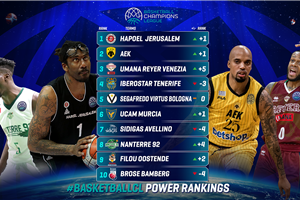 Power Rankings: Fab five for Bologna and Banvit; Jerusalem back to the top of the list

Can Antwerp prevent Bamberg from qualifying? What to know about Wednesday's games 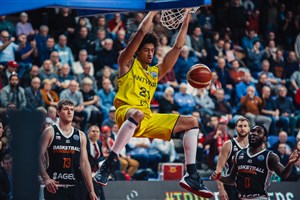