MIES (Switzerland) - Tofas Bursa are making their Basketball Champions League debut on Tuesday, with a visit to Keravnos in Group B action, less than a week since their new head coach Hakan Demir took the reins of the team.

Also in Group B, ERA Nymburk are travelling to JDA Dijon in the Czech team's BCL season opener while in Group D Falco are making their 2020-21 debut to the competition by playing host to Polish newcomers Start Lublin.

Let's have a closer look at Tuesday's three-game slate, which lifts the curtain on Week 3 action in the 2020-21 Regular Season: 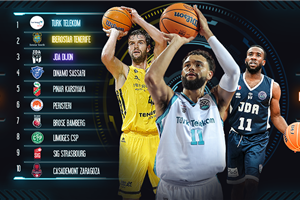