Article 28.1.1 Whenever, on a throw-in, the ball touches or is legally touched by any player in the backcourt and the team of that player taking the throw-in remains in control of the ball in its backcourt, that team must cause the ball to go into its frontcourt within 8 seconds.

Article 29.1.1 Whenever, on a throw-in, the ball touches or is legally touched by any player and the team of that player taking the throw-in remains in control of the ball, that team must attempt a shot for a field goal within 24 seconds.

The shot clock operator shall be provided with a shot clock which shall be:
Article 50.3 stopped and reset to 24 seconds, with no display visible, when the ball legally enters the basket.

Article 50.1 started when, on a throw-in, the ball touches or is legally touched by any player on the playing court.

Outcome: Incorrect decision from the referees. The shot clock operator started the shot clock before the ball touched or was touched by any player on the playing court after the throw-in, so only 6 seconds had elapsed when the referees called the 8 second violation.

Yellow 4 goes for a lay-up and defender Black 33 blocks the shot. The referee calls a goal tending violation and awards 2 points to Yellow 4.

Article 31. 2.1 Goaltending occurs during a shot for a field goal when a player touches the ball while it is completely above the level of the ring and;

Outcome: Correct decision from the referees. Black 33 touched the ball on its downward flight to the basket while it was completely above the level of the ring on a shot for a field goal. 2 points shall be awarded to Yellow 4.

While Black 20 is dribbling the ball on the perimeter, there is a contact in the corner between Yellow 4 and Black 24. The referee calls a team control foul to Black 24.

Article 33.11 It is a foul by an offensive player without the ball to “push off” to:

Outcome: Correct decision from the referees. Yellow 4 was trying to prevent his opponent, Black 24, from moving closer to his teammate, Black 2, to play a lateral pick and roll. However, it was Black 24 who created the illegal contact by raising his arms and dislodging the arm of his opponent. The Yellow team shall be awarded a throw-in at the place nearest to where the foul occurred.

Blue 16 receives a pass and tries to make a dunk. White 24 jumps and blocks the shot. The referees don’t call a personal foul.

Article 33.1 The cylinder principle is defined as the space within an imaginary cylinder occupied by a player on the floor. It includes the space above the player.

Article 33.2 The defensive player must not be penalised for leaving the floor vertically (within his cylinder) or having his hands and arms extended above him within his own cylinder.

Outcome: Correct decision from the referees. White 24 blocked the shot without creating any illegal contact with his opponent.

Blue 21 is in transition to his team’s frontcourt when White 34 creates a contact. The referee calls a personal foul and then decide to use the IRS.

Article 37.1.1 An unsportsmanlike foul is a player contact foul which, in the judgement of a referee is:

F.3.3    The following game situations may be reviewed:

*During any time of the game:

* whether a personal, unsportsmanlike or disqualifying foul met the criteria for such a foul or shall be upgraded or downgraded or shall be considered as a technical foul.

Outcome: Correct decision from the referees. The contact created by White 34 is considered an unnecessary contact caused by a defensive player in order to stop the progress of the offensive team in transition. 2 free throws shall be awarded to Blue 21 followed by a Blue team throw-in at the throw-in line in their frontcourt and 14 seconds on the shot clock. 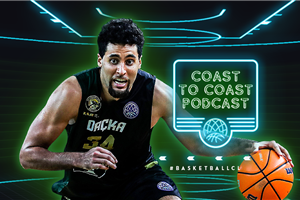 Experts make their picks: Who is your favorite three-point shooter in the BCL? 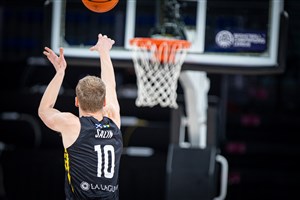