In the last 2 minutes of the fourth quarter, Black 5 makes a lay-up and White 18 blocks the shot. The referee calls a goal tending violation and awards 2 points to Black 5.

The following game situations may be reviewed

F.3.2 When the game clock shows 2:00 minutes or less in the fourth quarter and in each overtime:

Outcome: Correct decision from the referees. The IRS was correctly used to determine that White 18 blocked the shot on its upward flight, so no violation had occurred. The 2 points are cancelled and as no team had control of the ball, the game was resumed according to the alternating possession procedure, throw-in for the Black team as they were entitled to the next alternating possession throw-in. However, the shot clock should show 20 seconds instead of 14, since the ball didn't touch the ring.

During the third quarter, the referees call a shot clock violation because they understand that the yellow light on the backboard flashed on when the ball was still in contact with Green 0 hands. This player and the Green team Head Coach request the use of IRS to review the play.

Article 29.1.2  When the backboard is equipped with yellow lighting along the top edge of the perimeter, the lighting takes precedence over the shot clock signal sound.

The following game situations may be reviewed:

F.3.2 When the game clock shows 2:00 minutes or less in the fourth quarter and in each overtime,

Near to the end of the second quarter, Black 25 is dribbling the ball. Black 10 moves to the corner and his teammate Black 11 tries to set a screen to his defender. There is a contact and the referees call an offensive foul, for illegal screening.

Article 33.7     Screening is an attempt to delay or prevent an opponent without the ball from reaching a desired position on the playing court.

If the opponent is in motion, the elements of time and distance shall apply. The screener must leave enough space so that the player who is being screened is able to avoid the screen by stopping or changing direction.

The distance required is never less than 1 and never more than 2 normal steps.

Outcome: Correct decision from the referees. Black 11 didn’t allow enough time and distance when setting the screen on a moving opponent and he was even moving when the contact occurred. Team control foul for illegal screening. As a consequence of the Black Team Head Coach protests, a technical foul was called to him. Any White player team shall attempt 1 free throw and the ball will be awarded to the White team for a throw-in at the place nearest to where the foul occurred.

White 4 receives the ball from the referee to take a throw-in and after some seconds the referee calls a violation.

Article 17.3.1  The player taking the throw-in shall not:

Outcome: Correct decision from the referees. White 4 didn’t release the ball before 5 seconds and he also exceeded the allowed distance of 1m. 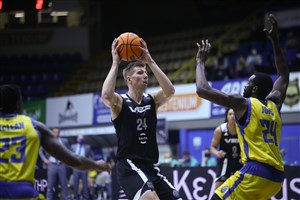