Team of the month for January: Peterson, Langford, Colson, Morgan and Zubcic

MIES (Switzerland) - The final month of Regular Season action in the 2020-21 Basketball Champions League left us with some remarkable individual performances, as teams were jostling for position in the race towards the Play-Offs. 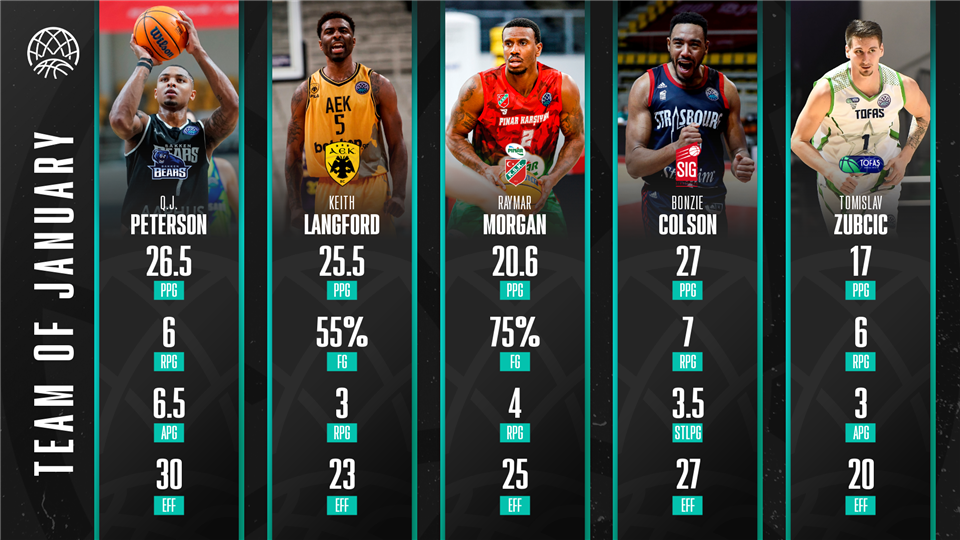 One of the above players will be the MVP of the month, and his name will be announced on Monday. Here's a closer look at the performances of the five members of Team of the Month for January 2021 in the BCL:

The 2020-21 BCL campaign of the Bakken Bears will not extend past the Regular Season but, during a short window in January, the Danish champions had very realistic hopes of reaching the Play-Offs for the first time in club history and Q.J. Peterson was a huge part of that great run.

The Bakken point guard dazzled fans around Europe with his two performances this month, his 35-point display in the win against Galatasaray on January 5 and his 18-point, 8-assist showing in the victory over powerhouse Iberostar Tenerife two weeks later.

Peterson and the Bears will not be in the Play-Offs but, in what was a milestone European campaign in both the career of the 26-year-old American guard and in the history of the club, they proved to everyone that they will be a forced to be reckoned with the next time around.

We always knew that there is no defense that can limit Keith Langford's scoring exploits, but this month we learned that not even father time can stop this natural-born-scorer from doing what he knows best.

The 37-year-old shooting guard poured in a season-high 32 points on 5 of 6 three-point shooting in AEK's most crucial game so far this season, at Tsmoki Minsk on January 20, earning the Greek side a 95-90 road win and a trip to the Play-Offs.

Best of all, Langford came up with that huge display despite being a game-time decision as he suffered from stomach pains up prior to the clash in Minsk. He concluded the Regular Season as the league's leading scorer, averaging 21.5 points per game, and as we all know the best is yet to come from Langford when we enter the business end of the season.

SIG Strasbourg had a disastrous 2019-20 BCL campaign but they underwent many changes to come back this season stronger than ever, and the arrival of Bonzie Colson was arguably the key component in this transformation.

The 25-year-old small forward, who is currently the league's third-leading scorer averaging 20.2 points per game (27 points per through January!), lifted Strasbourg to a 101-94 double- overtime win over VEF Riga on January 13 with a memorable display, as he nailed a dagger triple to tie the scores at the end of regulation and finished with a BCL season-high 31 points and 8 rebounds.

That win punched Strasbourg's ticket to the Play-Offs and Colson signed off the Regular Season with another big performance, collecting 23 points and 6 rebounds against Rytas Vilnius on January 26, albeit the French team were not victorious on that occasion.

Scoring efficiently and scoring consistently are two true signs of a great offensive player and Raymar Morgan clears both those bars with considerable ease, as he demonstrated in January.

The 32-year-old power forward needed only 19 minutes and 59 seconds on the floor to score 20 points in Pinar Karsiyaka's 85-76 win over RETAbet Bilbao on January 27 that sealed the Turkish team's passage to the Play-Offs.

Morgan is one of only three players to have scored 20 or more points in in less than 20 minutes of play in this season's BCL, but that display against Bilbao was only the cherry on the cake in a January stretch so consistent you could use it as a metronome:

He had had 20 points in a win against Fortitudo Bologna on January 5 and then a week later he posted 22 points and an efficiency rating of 30, again against the Italian team.

It's very difficult for a player to join a new team in January and have an immediate impact, let alone when he is coming off a prolonged period of inactivity, but somehow Tomislav Zubic kept himself in great shape since his 2019-20 season with Enisey ended, back at the start of the pandemic last spring, and was an instant great fit at Tofas Bursa.

The Croatian big man made his BCL debut with the Turkish club on January 6th, when Tofas were third in the group standings on a 1-2 record, and posted a double-double of 17 points and 10 rebounds out of the gate, in the win over Keravnos.

Zubcic followed up with two more great displays to help Tofas clinch the two huge wins over JDA Dijon and ERA Nymburk on the road that lifted them into the Play-Offs against all odds.

Unfortunately for the 31-year-old center this eventful month of January ended with the him undergoing surgery for a fracture in his right hand, but the hope is he will recover in time for the second week of the BCL Play-Offs, which start in March. 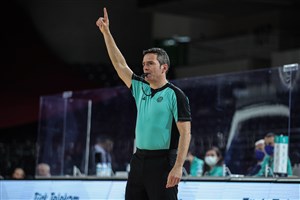 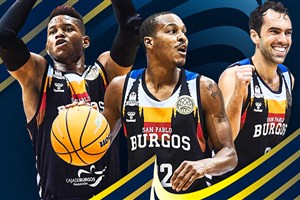