NIZHNY NOVGOROD (Russia) - There is a valid argument that this has already been the best BCL tournament when it comes to competitive games, close scorelines and drama.  The first semi-final of the day only served to further that argument.  The images below have already sealed their place amongst the most iconic or lasting images over the last five seasons.

You watched the game, you saw the emotion, the lead-changes and you know the final score but let's have a look at some of the tactics employed by the teams and see if there is anything to learn before the Final and third-placed game.

Sek Henry could hardly have picked a better time to put in a record-breaking performance. Seven of seven from deep is now the most 3-pointers made in a single game without a miss. From the opening tip, he came out like a man playing with a point to prove. Pinar Karsiyaka also came out as a team with confidence flowing through their veins. Check the set they ran for him in the first Quarter.

What you see in the clip below is what is known as a "Horns" set with two bigs on the elbows and two perimeter players in the corners. Henry starts the play with the ball and after entering the ball to one of the elbow payers, he makes a "Chin" cut named after the Princeton offense. From there is where Karsiyaka's options begin. Watch how he acts as if he is about to set a screen for Tony Taylor, then as soon as his defender (Dylan Ennis) signals to switch the screen, he takes advantage of the moments hesitation and sprints the other way and into the staggered screen on the other side of the floor. With the handoff for D.J. Kennedy happening at the same time for misdirection, this was unbelievable execution from Ufuk Sarica's squad.

Karsiyaka would balloon the lead to 14 points at one stage and certainly the first quarter was all going the way of the Turks. One of first adjustments that coach Luis Casimiro made was to his lineup. The Quarter-Final had seen Zaragoza get a lot of joy from playing Harris and Wiley as the starting frontcourt despite neither being natural centers. With the mobility of Karsiyaka's frontcourt duo of Morgan and M'Baye, it made sense to try and matchup like for like. But when it wasn't working Casimiro turned to his big man Hlinason. One particular set caught the eye.

What we see in the video below is another Horns set like the first video but with a very different aim. Zaragoza wanted to create a situation where they could play a two-man game on one side of the floor with space for their big man and a playmaker to go to work. This type of Horns set is often known as "Horns Side" as it involves one of the bigs on the elbow setting a ball screen on one side of the floor. The ball screen is not the action they are looking to create an advantage from. Watch how Hlinason is setting a wide pin down for Dylan Ennis. When we say wide we are talking about how close to the sideline the screen is. In this case, Hlinason even has a foot outside the 3-point line. Even for a wide pindown, this is wide. The result is that Ennis turns the corner into space and as Hlinason's defender (Erden) has dropped into the paint to protect the rim, the two Zaragoza have more than enough room to work the two-man game.

The tactical side of the game is not just about coaching adjustments, it's possibly even more about the small often unnoticed decisions that players make in the flow of the game. Coaches can design the playbook to have different options the players can take advantage of but the players need to use those options.

Remember the first video where we spoke about Henry making the Chin cut then faking the screen for Taylor before sprinting the other way? Watch the clip below and hopefully you can see Karsiyaka are running the same set to start but the option they chose is different. This time instead of faking the screen for Taylor, Henry receives a pin screen from Bitim. The confusion is just enough for Henry to get away from Sulaimon, who was forced under the screen giving him the opportunity to make a read and flare out to the corner. Sulaimon also slipped but Henry had already created separation by the time he slipped.

Whilst we are talking about Karsiyaka going back to the same set with a different option, lets go back to Zaragoza getting some joy from the two-man game on one side of the floor.

Watch how they emptied the corner with Wiley sliding from the dunker's spot to the ball side. This left the entire side of the floor for Harris to pop his ball screen and then get into the two-man game with Rodrigo San Miguel. Also notice the action they use is a hybrid between a handoff and a ball screen with Harris flipping the ball to Miguel just before setting the screen. Also similarly to the first clip with Hlinason, notice that Harris has one foot either side of the 3-point line when setting the screen. This makes it nearly impossible for San Miguel's defender to go under and creates the two v one advantage.

Zaragoza built on the momentum from plays like this and during the third Quarter they went back to their lineups with three forwards. At first, it was a five of San Miguel, Ennis, Brussino, Harris, and Wiley and then Sulaimon subbing in for San Miguel. They were able to be much more aggressive defensively, especially in the pick-and-roll but one crafty adjustment from Casimiro to start the fourth Quarter really caught the eye.

By now you will surely recognize the set that Karsiyaka are running in the clip below. Watch how Zaragoza completely eliminate it by switching everything. Then Brussino makes an excellent read when he see the back of the ball-handler's head and steals it from his blindside. What made this adjustment so lethal, is that for most of the third Quarter Zaragoza had been enjoying so much success from trapping screens and fighting over. There was no reason for Karsiyaka to expect. them to change coverage.

A lesser team than Pinar Karsiyaka would have been dead and buried by the run that Zaragoza went on but as Amath M'Baye mentioned in his post-game interview, Sarica's squad have built an identity on finding ways to win over the last two seasons together - most of this squad was playing together in the FIBA Europe Cup last season. And find a way is exactly what they did. M'Baye in particular hit some huge shots down the stretch.

The dunk in the play below caught the eye for almost everyone but it was also an excellent adjustment by the big Frenchman. Zaragoza had gone back to aggressively fighting over screens and extending out into the passing lanes. Watch how M'Baye stayed cool when Henry picked up his dribble. He waited for Henry to turn and create eye contact before making the backdoor cut. If he had gone on the first opportunity Henry would have missed the cut and been left stranded with no dribble. This is exactly what coaches mean when they talk about chemistry between players.

We have to end by giving a huge amount of credit to coach Sarica for one final decision. Raymar Morgan had been quiet in the game and sat for most of the third and fourth Quarters with 4 fouls. With 6 minutes left in the fourth, Sarica put him back out on the floor. This was a huge call because that is a long time to pick up the fifth foul and that would leave Sarica without a late adjustment should he need him in the clutch. The decision paid off in a big way and Morgan came straight into the game and rewarded it. It would prove decisive. 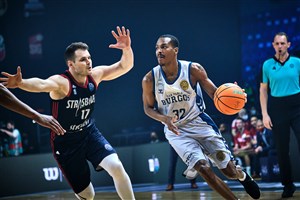 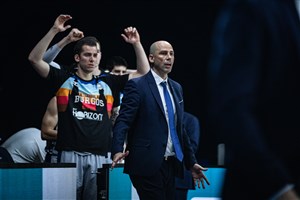