NIZHNY NOVGOROD (Russia) - We are still waiting for the first team to defend their title in the Basketball Champions League. Hereda San Pablo Burgos kept their hopes of going back-to-back alive with an 86-77 win over Hapoel Unet-Credit Holon in the Quarter-Finals in Russia.

Turning point: Joan Penarroya's team talk during the halftime. Burgos' coach made the right adjustment, matching Holon's small-ball lineup and giving his veteran guards all the offensive freedom to recognize and punish the mismatches all over the floor. Title holders' rhythm never slowed down, wearing down Hapoel's eight-man rotation by playing 11 players of their own. All 11 played less than 27 minutes.

Stats don't lie: Burgos had a plan of getting to the paint and they executed it to perfection. Alex Renfroe and Omar Cook combined for 17 assists, Burgos opened up a 44-28 advantage in points in the paint, and got to the free throw line 30 times, compared to 16 free throws for Holon.

Game hero: Vitor Benite is much more than just a three-point threat. He only knocked down 2-of-9 shots from deep, but still put 26 points on the scoreboard on 8-of-16 field goal shooting. Honorable mention goes out to Renfroe, who had 14 points and 10 assists.

Bottom line: Lenovo Tenerife won the first title in 2017, and got eliminated in the Round of 16 in 2018. That same year AEK won the title, but lost in the Quarter-Finals in 2019. Segafredo Virtus Bologna weren't around to defend their title in 2020, which means Hereda San Pablo Burgos are the first defending champion to make it back to the Final Four. SIG Strasbourg are waiting on the other side, after pulling off the upset of the Final 8, defeating Lenovo Tenerife in the Quarter-Finals.

Hapoel Unet-Credit Holon played a historic season, winning the Balkan League and reaching the Final 8. Even though they couldn't dethrone the champs, 2020-21 campaign was and still is a successful one. 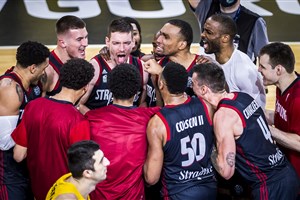 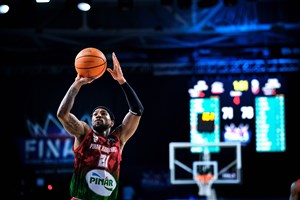