MIES (Switzerland) - The Final 8 is serious business and it will culminate in crowning the 2020-21 Basketball Champions League champion, but it is also a big celebration of our sport, so it should be (and it will be) a great deal of fun, too.

What better way to bring some levity to the whole affair than to treat each of the four Quarter-Finals as an entertaining basketball arcade game that entered popular culture?

ERA Nymburk are facing Pinar Karsiyaka in the second Quarter-Final, on May 5, and we have picked Retin Obasohan and Vojtech Hruban from the Czech team and pitted them against Amath M'Baye and Raymar Morgan from the Turkish side in a ... 2-on-2 basketball comparison!

Nymburk duo: There is no offense in the BCL as pluralistic as Nymburk's, with no less than six players averaging double digits in scoring. The offshoot of this approach is that a different player leads the Czech team in scoring in almost every other game. Sometimes, that player can be Retin Obasohan or Vojtech Hruban, but either one of them can also have an off-night here and there. Obasohan is having his best season in the BCL so far and is averaging 14.4 points per game but he's had three games of 20+ points and three single-digit scoring games. Hruban is the all-time leading scorer in the competition and you don't get there unless you're really good at putting the ball through the hoop, but he's gone through some ups and downs this season and is averaging 13.4 points per game, down from 14.9 points last season.

Karsiyaka duo: Being American, Raymar Morgan is probably unaware of the classic 'he scores when he wants' European soccer chant, but it applies perfectly to him. The Karsiyaka power forward is a master of the midrange shot and he makes 7.3 two-pointers per game. more than any player whose team made the Play-Offs, on 10.9 attempts. He is the fourth-leading scorer in the league as we head into the Final 8, averaging 18.3 points per game. Amath M'Baye meanwhile is Karsiyaka's second-leading scorer, averaging 15.6 points per game in what is certainly the 31-year-old French international's best-ever campaign scoring-wise not only in the BCL but in any European competition, including his stints at Olimpia Milano, Virtus Bologna and last season with Karsiyaka in the FIBA Europe Cup.

Nymburk duo: There are numerous advantages to Nymburk playing at such a fast-paced tempo that they get more possessions than any other team and lead the league in scoring (they average 89.8 points per game), but one thing they cannot do is to execute with laser precision, on every trip down the floor. Consequently, Obasohan's average efficiency rating is 14.9 and Hruban's is 12.5, which are very solid but don't place them in the top-30 in the league. The same goes for their effective field goal percentage (eFG%), which is 48.1 percent for the Belgian point guard and 50.5 percent for the Czech winger.

Karsiyaka duo: There were nearly 200 players on the rosters of the 16 teams that competed in the Play-Offs and Raymar Morgan led all of them in efficiency, with an average rating of 20.6 per game. And, of course, the reason why his teammates keep feeding him the ball so that he scores as much as we mentioned above is that he is very efficient at shooting the ball, with one of the highest effective field goal percentages a volume scorer can aspire to, 65.2 percent. M'Baye's average efficiency rating of 13.3 might seem low by comparison, but the French small forward spends more time on the floor than any other Karsiyaka player (30.2 minutes per game) and, when seen in that context, it's understandable that his efficiency can start to dwindle as fatigue kicks in.

🇨🇿 international Vojtech Hruban could break the 1,000 mark by the end of the 2020-21 #BasketballCL season!

Nymburk duo: The 2020-21 edition of Nymburk don't do close games. The Czech champions have been involved this season in only three games decided by 5 points or fewer, and they won all three. This gives rise to a chicken-and-egg situation where it's impossible to say which came first, Obsohan's and Hruban's confidence in these situations, or Nymburk's clinical efficiency in crunch time. But it's also an irrelevant question, because the bottom line is that you can absolutely trust the Nymburk duo to step up when the going gets tough.

Karsiyaka duo: The Turkish team are probably the polar opposite of Nymburk when it comes to involvement in close games, as they make a habit of playing in such contests and, by contrast, they only had four games this season where the outcome was determined by a double-digit margin. Karsiyaka had mixed success in the remaining eight single-digit margin contests, winning four and losing four. Morgan, as a power forward who often slides to the 5 spot, and M'Baye as a small forward who can also play at the 4, don't have the ball in their hands that much in the clutch, but depending on their guards' choices, they have both demonstrated that they can be reliable options in crunch time.

😤 @Oballsohard is having a breakthrough season!

Nymburk duo: Neither Obasohan nor Hruban can take credit for Nymburk's 'next man up' mentality but they benefit from it. It seems as every player on the Czech team will have their day in the sun. When, for example, Hruban was sidelined with injury against Brose Bamberg on March 30, his understudy Lukas Palyza stepped in and scored a BCL career-high 26 points. This approach means that both Obasohan and Hruban, who are two players capable of coming up with something unpredictable, feel free and therefore are more inclined to do so.

Karsiyaka duo: Morgan and (perhaps to a lesser extent) M'Baye are very dependable players who do what they do exceptionally well, but either because of the position they play or because of Karsiyaka's style of play, they don't generally surprise opponents. One exception is M'Baye trying his hand from downtown when the defense is not quite prepared for it, and it's obvious he has the approval of coach Ufuk Sarica because that is something he does quite often, at any stage of the game. 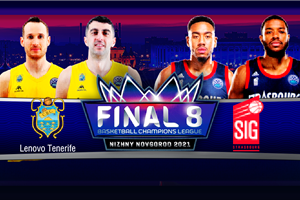