MIES (Switzerland) - Which Basketball Champions League clubs have made the most impactful moves so far in the pre-season? We've been keeping track of all the comings and goings in the transfer market and ranked the winners of the summer.

Don't forget though there are some very good reasons why this is often called the 'silly season', as impressive new signings and big moves off the court might steal the summer headlines but don't necessarily translate to success on the court once the season gets underway.

With that important disclaimer in mind, let's have a look at the Top 10 of pre-season winners:

The moment the Spanish team confirmed that head coach Joan Penarroya will continue at the helm, it was obvious that they would look to maintain the style of play he established in 2019-20 and only replace as few pieces as possible.

FIBA Basketball World Cup 2019 champion Xavi Rabaseda was recruited to fill in a gap at small forward, while Burgos will field a new couple at point guard as the veteran duo of Alex Renfroe and Omar Cook takes over playmaking duties from Ferran Bassas and Bruno Fitipaldo

Meanwhile Ken Horton was brought in to replace last season's star signing, Earl Clark, at the '4' spot, while Dejan Kravic and Jordan Sakho add much-needed length and muscle at center.

'If it ain't broke, don't fix it' must be the favorite phrase of Zaragoza Sporting Director Pep Cargol, as the Aragon club went to great lengths to maintain the core of the 2019-20 squad that turned heads in both the Spanish Liga Endesa Regular Season and in the BCL.

It is indicative that the club even managed to bring back the American duo of D.J. Seeley and Jason Thompson, who had left Zaragoza in March due to the coronavirus pandemic and didn't play in the Liga Endesa season-ending tournament.

You already know @TylerEnnis, the quiet brother. In Zaragoza you're going to meet @canadiankidDJE, the crazy one 🤪.

Rasheed Sulaimon, who averaged 13.4 points and 3.3 assists per game for JDA Dijon in the BCL, was Zaragoza's first signing while Sagaba Konate was brought in to replace the departing Nemanja Radovic at power forward.

If you subscribe to the school of thought that you can never have too much experience on the court, then you will fall in love with AEK's 2020-21 roster.

The strategy of signing battle-hardened veterans worked wonders for the yellow-blacks when they brought on board the likes of Jonas Maciulis, Marcus Slaugther, Keith Langford and, late in the 2019-20 season, Nikos Zisis.

So this summer, they decided to keep on the same path by adding swingman Matt Lojeski and point guard Tyrese Rice, albeit it's not yet clear whether Rice will stay with the club for the entire season.

Meanwhile 2019 BCL champion Yanick Moreira has been trusted with the starting center spot, after spending last season at fellow Greek BCL club Peristeri, where he averaged 12.9 points, 6.7 rebounds and 1.1 blocks per game.

Are Tofas secretly building a dark horse for the 2020-21 title race? The straight answer is no, simply because there is nothing hush-hush about the construction of the Bursa club's new roster and its ambitions, all the ingredients are there for everyone to see.

Despite losing long-serving captains Baris Ermis and Sammy Mejia, as well as key players such as Matt Lojeski, Tarik Philip (who moved to fellow BCL clubs AEK and Hapoel, respectively) or Rion Brown, Tofas maintain their cornerstone in the shape of head coach Orhun Ene, who is entering an impressive sixth consecutive season at the club.

As for the new arrivals? Semaj Christon and Sean Kilpatrick are bound to form a reliable backcourt duo, while Jeremy Simmons is a modern center with a knack for racking up double-doubles and Nuni Omot is a forward who is yet to exploit his full potential.

In today's sport it's nearly impossible to abide by the 1960's 'never change a winning team' adage, but Karsiyaka have admittedly come this summer as close as possible, starting by retaining Turkish national team head coach Ufuk Sarica at the helm for yet another year.

With no less than 11 players returning for the 2020-21 season, it will be quite difficult to distinguish the new roster from the squad that was in hot pursuit of Anadolu Efes for first place in the Turkish league's 2019-20 Regular Season up until the pandemic-induced stoppage.

Even Sek Henry and Raymar Morgan, this summer's star arrivals in Izmir, will hardly require any time to adapt as they both have played for the club before.

We've already covered that summer signings are no guarantee of success, but in Fortitudo's case they are certainly a huge promise of the most entertaining team of the season.

The first step towards creating a team that will be great fun to watch, was to trust the reins to Italian national team head coach Romeo Sacchetti, as the Azzurri legend is a known proponent of a brand of basketball that is attractive to fans.

The storied Bologna club then proceeded to put together a 'score first, ask questions later' roster by assembling the three leading scorers of the 2019-20 Italian Serie A: With Pietro Aradori already on their team, Fortitudo went out and also added Ethan Happ from Cremona and Adrian Banks from Brindisi.

Last but not least, Tre’Shaun Fletcher and Todd Withers were brought in to bolster the forward spots and the 'Effe' also added Leonardo Totè, Gherado Sabatini and Mattia Palumbo.

Galatasaray's distinctive yellow-red crest might be one of the most recognizable badges in European sport, but gold  is what they deserve for their brilliant moves this summer.

The Istanbul club had to make up for the departures of several key contributors, such as Aaron Harrison, Zach Auguste and Tai Webster, but they rose to the challenge by quickly recruiting high-profile replacements.

Alex Hamilton, who is coming off a breakout season with Rishon Le Zion, and former Turk Telekom shooting guard RJ Hunter are expected to form a high-octane scoring partnership in the backcourt, with plenty of help from Daryl Macon and former Tofas co-captain Baris Ermis.

Galatasaray also added former Valencia and Anadolu Efes power forward Brock Motum, but they are now again in need of a center after their deal with Zach Hankins  fell through in late August, barely two weeks after the former Nymburk big man was announced by the Turkish club.

Is signing a compulsive scorer the best way to replace a departing compulsive scorer? Hapoel certainly seem to think so, so when James Feldeine - who averaged 15.6 points on 45 percent three-point shooting in the 2019-20 BCL - parted ways with the Israeli club, they penned Malcolm Hill.

The 25-year-old swingman was the second-leading scorer in the 2019-20 VTB United League, averaging 20.2 points per game on 39.3 percent shooting from three-point range.

Meanwhile combo guard Tarik Phillip, who had an excellent season at Tofas Bura, will add a pair of safe hands in the backcourt but perhaps Hapoel's biggest success this summer was retaining TaShawn Thomas, a firm 2019-20 MVP candidate, J'Covan Brown, Suleiman Braimoh, as well as securing that Tamir Blatt will stay with the team for another year, on loan from his new club, Alba Berlin.

If you had three former Houston Rockets on your 2019-20 roster and you part ways with two of them, how many former players of the Texas franchise will you have on your 2020-21 roster? Well, if you are Turk Telekom, the correct answer is still three.

Back in the summer of 2019, Tenerife's roster underwent a complete overhaul and the Spanish team recruited 12 new players. The club still made major changes this summer, but this time around they retained several key pieces, including their star duo of Marcelinho Huertas and Giorgi Shermadini.

The new additions however are tantalizing, to say the least, starting with veteran Dutch-Canadian Aaron Doornenkamp who played some of the best basketball of his career during his first stint at the island club and was a member of their 2016-17 BCL title-winning team. 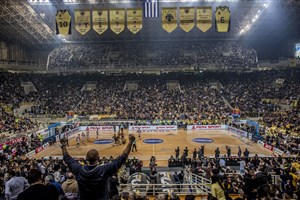