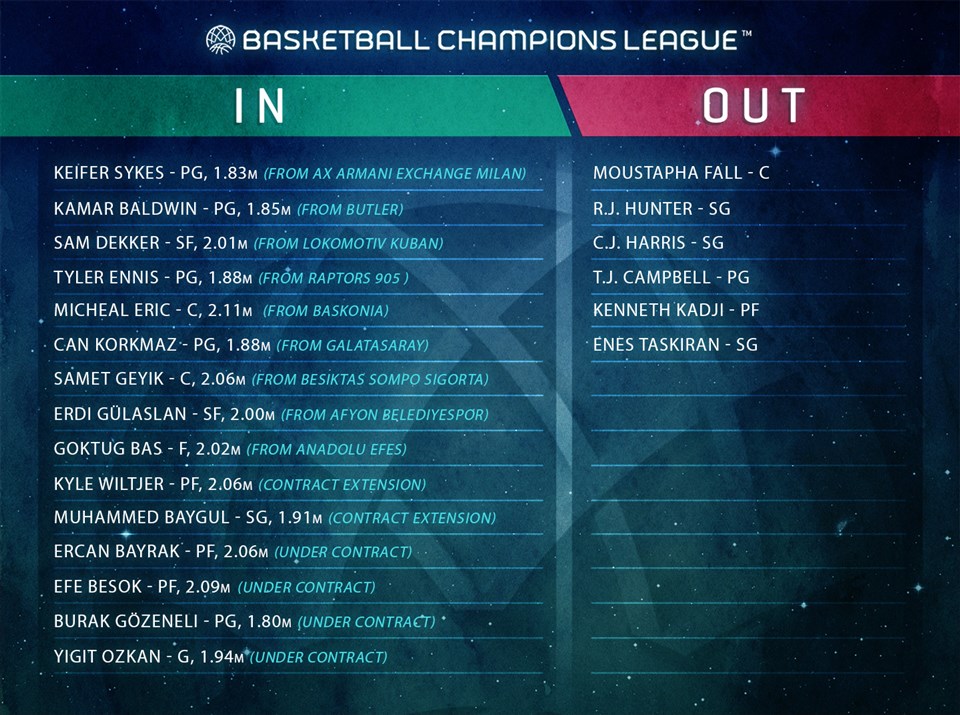 Turk Telekom's latest signing is a player who has already made history in the BCL, Keifer Sykes. The 26-year-old guard who played for Sidigas Avellino in 2018-19 holds the competition record for most points scored (43) and highest efficiency rating (also 43) in a single game.

Sykes started the 2019-20 season at China's Guangzhou Loong Lions and then signed for Italian powerhouse Armani Milan. He averaged 13.8 points and 3.7 assists in Serie A with 7.3 points and 2 assists in the EuroLeague.

Turk Telekom had previously brought on Butler graduate Kamar Baldwin, who will commence his pro career in the Turkish league and the BCL. In his senior year with the Bulldogs in the NCAA, the 22-year-old point guard averaged 16.2 points, 4.6 rebounds and 3.3 assists per game.

Earlier in the summer, the Ankara club stole the transfer market limelight by announcing two high-profile new arrivals within minutes of each other,  as both former Houston Rockets forward Sam Dekker and former LA Lakers guard Tyler Ennis joined the Ankara club.

Dekker, who has also  played for the Clippers, Washington and Cleveland, first arrived to Europe a year ago, after agreeing terms with Russian side Lokomotiv Kuban.

Meanwhile Ennis, whose older brother Dylan plays for BCL Group B contenders Casademont Zaragoza (Turk Telecom were drawn in Group C), played briefly for another Turkish side, Fenerbahce, back in 2018-19 after parting ways with the Lakers.  Ennis returned to the US and spent the last season with Raptors 905 in the G League, where he averaged 17.2 points and 7.5 assists per game.

Turk Telekom have replaced the departing Moustapha Fall in impressive fashion, by landing freshly-crowned Spanish champion Micheal Eric. The Nigerian international, who played in Turkey for Darussafaka before joining Baskonia, averaged 7 points and 3.6 rebounds per game to help the Vitoria club conquer the Liga Endesa crown in June.

The Ankara club have also made a clear choice to bolster their Turkish core with players that have already accumulated considerable experience but are still at an age which gives them plenty of room to develop.

The most representative new signing in that sense is point guard Can Korkmaz, who arrived from new BCL participants Galatasaray. Korkmaz averaged 6.8 points and 2.1 assists per game in the 2019-20 Turkish BSL league.

Another player to join the Ankara club from an Istanbul rival is Samet Geyik, who spent the last three seasons at Besiktas. The 27-year-old power forward averaged 5.7 points and 5 rebound per game in the 2019-20 BCL with the black-white Eagles.

Turk Telekom made certain early on in the summer to extend the contract of head coach Burak Goren, as well as the contracts of two players who enjoyed a great campaign under Goren's guidance last year in both the BCL and the BSL, Canadian international Kyle Wiltjer and Turkish star Muhammed Baygul.