LONDON (England) - Sometimes in sport, a star player can come into a new club and either it takes time for them to hit their stride, or the fans just never truly identify with them. In the case of Kevin Punter and Virtus Bologna, neither could be further from the truth. From day one, the relationship between Kevin Punter and those raucous fans in the PalaDozza has looked like the start of a beautiful romance. They make a ton of noise, wave flags, sing songs and intimidate the opposition. He talks trash, stirs the cauldron and then nails clutch shots to kill games and send the place into a frenzy. The formula is simple and timeless. And so far this season it's been working perfectly to create one of the must-watch, home atmospheres in European basketball.

"We have an amazing fan base, we just try to protect our home court and keep these fans happy". - Kevin Punter

In the latest installment of the Virtus Bologna stage drama, Punter delivered another showstopping performance in the closing scene.  26 points in 27 minutes overall - 11 of which came in the final 3:33, as Bologna and KP further evidenced their ability to close out games - this time against SIG Strasbourg.

If you'd been watching closely - before that 4th Quarter deluge even started - you'd have seen a familiar trigger that might have given you an idea of what was to come from #0 in black and white. Late in the 3rd Quarter, Punter went up for a layup in transition (already starting to get cooking by this stage) expecting contact from his championship teammate Mike Green. Green moved out the way to avoid contact, slightly undercutting Punter in the process.

Punter landed awkwardly, expecting a whistle. The officials don't blow and Punter was slow to get up. By the time the ball had returned to Strasbourg's half of the court, Punter was waiting and went straight up in Green's face.  The conversation between the two started from there and continued until Punter iced the game in the 4th.

We asked Kevin Punter about his penchant for a bit of trash talk:

"It's always good to play against great players and great teams. You know, like last night, playing against Mike Green my old teammate, him just talking trash......, me and him talking trash made me elevate my game and helped us continue to grind out and get the win." - Kevin Punter

You might have thought that Green - as a former teammate - would choose not to motivate Punter by engaging in the "friendly banter",  but sometimes the temptation to compete is often too much. Either way, he certainly did help to elevate Punter's game and with it, the noise levels in the PalaDozza. From that moment on, Punter was 5/5 from the field, dished a decisive assist, and also managed to draw a technical foul on Mike Green.

The next possession down after the trash talking started Punter curled around a screen and nailed another shot over Mike Green - that shot marked the end of Green's time guarding Punter. Although, it didn't really matter who SIG threw at him. By that point, Punter was pretty much unconscious. The last shot that iced the game went in off the glass and was from way back, with a hand in his face. We didn't ask Punter if he called bank but if we had, he would have been well within his rights to reply "I called game!".

(Those of you wondering if that shot was lucky, you might want to check with the AEK fans first - Punter has previous for late-game, bank shots from deep)

Of course, Mike Green wasn't the first player to get caught in the trap of talking trash with Punter this season. The very first game of the season, Kyle Weaver got his wings in the web and unwittingly brought the best out of Punter, as Virtus Bologna got it done in OT against Neptunas.

As a fun exercise, we asked @basketistics to take a look at Punters shooting numbers PTT (Post Trash-Talk). Over the two games that got especially spicy, his eFG %* is 100 %! Almost everything from the top of the key, off the dribble and almost every shot has been heavily contested.

📊Stat Of The Week: 💯 - @KPJunior_‘s Effective FG% is 100% after talking trash with an opponent! 🗣 #BasketballCL pic.twitter.com/eoGvAJ584k

Now, obviously, this stat is a fun way of looking at Punter as a competitor in the early stages of the competition. And no matter how well Punter and Bologna continue to play, over the course of a season basketball doesn't do 100%. There will be clutch games where the shots don't fall, but this isn't a narrative to be over analyzed and agonized over. It's one to enjoy. We all love to see good teams going at each other and we can only hope more players step into the arena and engage with Punter in the late stages of close games.

* Effective Field Goal Percentage; the formula is (FG + 0.5 * 3P) / FGA. This statistic adjusts for the fact that a 3-point field goal is worth one more point than a 2-point field goal. 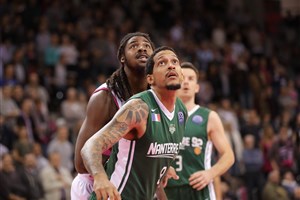 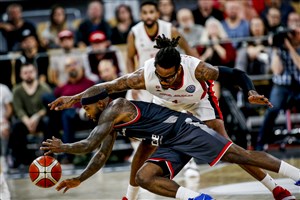