Vote now: Who had the best coaching play of the first leg?

ZAGREB (Croatia) - Feels like the coaches aren't getting enough love from us. That's why we analyzed the plays after the team huddles, to check on their handwriting, and let you vote for your favorite.

You see, it's not just the highlight plays that make the world go round. It's not just the alleys and the oops, or the buzzer beating three-pointers. Sometimes, the beauty of basketball is not even in the field goal made, but instead, in what came before it, the build up, the defensive midfielder playing the passing lanes, stealing the ball, giving it back to the center back, reorganizing the lineup for an attacking push, and allowing the 8s and the 10s to get the final pass into the 9s to score the goals.

Yeah, yeah, wrong sport, I know. But the point is the same. And in case you want to recognize the coaching talents of a team - a basketball team this time - the easiest way is to observe the plays straight out of the team talks in game breaks. Talking about the ATO plays here.

That's where you can find a lot of brains and smarts on the court. Off the court, you can find it in Diccon Lloyd-Smeath's Basketball Champions League Insider columns and Closer Looks, which is why I made the call to London, and decided to have @DLScoaching on board for this rendition of the Help-Side Column.

IC: Hey, man, šta ima? Wanna join me for an ATO piece this week?
DLS: Sure. Even though you're a Hajduk Split guy, and I shouldn't be talking to you, being a Tottenham fan here.
IC: It was a long time ago, give it a rest already.
DLS: THE POOR ROOSTER STOOD NO CHANCE!!!
IC: Ugh...

Anyway, without further ado, here are the top ATO plays of the week, selected by a Hajduk Split follower and described in detail by a fan of the Spurs - yes, the wrong kind of Spurs.

Contender #1 - Djordjevic draws it up for Baldi Rossi

Curkovic's what to watch: Entire Virtus Bologna bench up on their feet. Coach Sasha Djordjevic doesn't even blink on the sideline.

Lloyd-Smeath's know-how: Very much a common look to the way this play starts. Bologna in a "Horns" set with two bigs on the high post. Chalmers receives a back screen after passing and makes a "Chin" cut into the lane.  At the same time, Baldi Rossi is initiating a dribble hand-off (DHO) to Tony Taylor and a ball screen then arrives from Brian Qvale. Then the set becomes less common.

Chalmers sets up to cross-screen for Baldi Rossi. This would be a standard guard-to-big cross screen that you see a lot. Instead, Baldi Rossi fakes to take the screen, completely loses Hugo Invernizzi and cuts to the 3-point line to splash out.

Coach Djordjevic at work here for sure.  We have seen his liking for utilizing the "stretch four" role with Serbia, and it seems Baldi Rossi could hear his name called on a few more plays yet.

Contender #2 - Antwerp moving from side to side

Curkovic's what to watch: Just keep your eye on Tyler Kalinoski the entire way. Especially after he makes the cut, looks up and opts for the help side corner.

Lloyd-Smeath's know-how: Nizhny actually do a great job of blowing this set up. The Russians had clearly scouted this set. watch the way they deny Tyler Kalinoski the DHO from Sanders. They get everything right until Antwerp show us the chemistry and strong team understanding they have all season.

Sanders and Bako just go straight into a pick-and-roll. Nizhny was terrified of Bako rolling to the rim and after Sanders escapes the trap, they sent TWO players to help on the roller. Sanders makes a great cross-court pass and Kalinoski reads the situation perfectly to relocate out to the corner for the extra pass.

This Antwerp team really knows how to play together. We probably don't need to tell you that though.

Curkovic's what to watch: "The potential is great. He just needs to keep on working like he is every day, and I believe that it wasn't just (in the first leg against AEK), that he improved throughout the season. And I'm sure that he will improve again," coach Federico Perego was full of praise when Cliff Alexander's name was mentioned. No surprises then that he opted to draw something up for him on the very first play of the game.

Lloyd-Smeath's know-how: Nice set here from Bamberg to start the game. They start in a "mover blocker" setup with two bigs mirrored on both sides of the floor, screening for two wings to get open. Rice cuts up the lane, Heckmann cuts across the lane. The ball goes to Rice, then Heckmann and finally to Alexander in the post.

The execution is good and the finish by Alexander speaks to the development Coach Perego spoke of. The real thing to notice here is Bamberg making a point of attacking Hunter in the post at the very first opportunity. Everyone knows Hunter is important to AEK, but if Bamberg can make him a target on the defensive end, the series gets even more fascinating.

Contender #4 - Sakota much more than just a spot up shooter

Curkovic's what to watch: Just the way Sakota is reading the play. That's the experience and panache he brings to the club, and that's why Luca Banchi went to Sakota in almost every ATO play in Germany.

Lloyd-Smeath's know-how: Again, the finish from Sakota is impressive and The Queen's captain is such an asset offensively - especially in a Play-Offs situation. Sakota is as good as it gets for soaking up pressure and making big shots. The back story is almost as interesting. The two plays before this, Bamberg had called a timeout and went to Rubit in the post twice after that timeout. They scored twice.  The first one was a "Dirk-Leg" fadeaway out of the very top drawer:

AEK's response to Bamberg attacking them in the post? Call timeout and draw up a play to take advantage of Bamberg's switching by attacking them straight back in the post. Captain Fantastic delivers and Perego vs Banchi goes further down the rabbit hole!

Curkovic's what to watch: Josh Owens moving without the ball, going from the elbow to the "dunk" position, keeping Sebas Saiz occupied, not allowing him to provide help like I do in the Help-Side Column every week.

Lloyd-Smeath's know-how: Igor has pretty much told you everything to know about this play. Josh Owens' selfless movement makes it tougher for Tenerife to help on the roller. The pass from Blatt is outstanding.

The game context is interesting too. You hear the commentator telling you that Tenerife is trying to slow the tempo. They come out in a zone press designed to do exactly that. Blatt and Coach Kattash win the battle on this occasion, as they get a great look out of the first action of the offense and keep the tempo up.

Curkovic's what to watch: This is why I keep calling Tenerife the Basketball Champions League version of the 2014 Spurs. The San Antonio ones, not the ones DLS likes. So much ball and man movement in here...

Lloyd-Smeath's know-how: I like those Spurs as well. I'll have you know, the North London Spurs also pass the ball pretty well. Better than Hajduk Split do at the moment anyway...

This play, however, is Txus Vidorreta's Tenerife in a nutshell. They run a dribble weave just to set Jerusalem up for a Spain pick-and-roll. Jerusalem switches Blatt and Feldeine. Blatt gets it right and slows the ball, Feldeine gets stuck underneath Colton Iverson (don't try this at home, kids) and Bassas is wide open (jumping and screaming for the ball).

The pass is late and they miss the opportunity. But, being Tenerife they just keep flowing. Another ball screen, another ball reversal, and Staiger attacked the closeout for the pull-up J! Mauricio Pochettino would have approved. 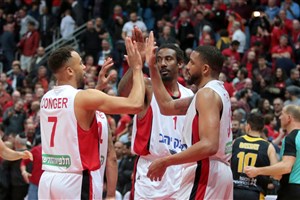 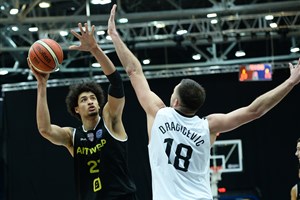