Black 19 drives to the basket and, in the air, creates a contact by his left arm with defensive player White 4. The contact is created by Black 19 and he is therefore responsible for it. The contact is not illegal, thus putting Black 19 in disadvantage because it is created by him. No foul should be called on this play – legal play.

White 6 passes the ball over the front court and defensive player Red 31 is able to deflect the pass. After that, White 33, who tries to catch the pass as well, is late and creates an illegal contact. The contact is quite hard due to the fact that 2 players are jumping to each other, it is still a normal basketball action. A personal foul should be called on White 33.

This rule applies when:

In this example, either a "no call" or a defensive foul should be called (the situation is a very close call, because Red 24 is momentarily in contact with the semi-circle line).

Red 3 drives to the basket. He gathers the ball when his left foot is touching the floor (so called zero step), then he takes three more steps right-left-right and stops. A player who catches the ball while he is progressing, or upon completion of a dribble, may take two steps in coming to a stop, passing or shooting the ball.
The first step occurs when one foot or both feet touch the floor after gaining control of the ball and the second step occurs after the first step when the other foot touches the floor or both feet touch the floor simultaneously. A travel violation should be called.

White team starts its new team possession with 2.54 remaining. White 1 takes a jump shot that misses the rim, after what the shot clock is mistakenly re-set to 14 as White team continues the offense. When the game clock shows 2.39, the referees correctly stop the game, but re-set the shot clock to 11. The shot clock should be re-set to 9 seconds (2.54 – 2.39 = 15 elapsed).

Outcome: Incorrect decision by referees to determine the remaining time on the shot clock. 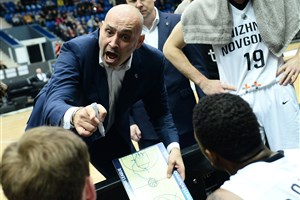