Black 13 dribbles the ball and penetrates towards the basket. When he gathers the ball, his left foot is touching the floor and the next foot to touch the floor is again the left one (hop). A player may not touch the floor consecutively with the same foot or both feet after ending his dribble or gaining control of the ball, and a travel violation should be called.

Blue 22 grabs the offensive rebound at the end of the quarter. When he shoots the ball, White 13 blocks the shot and the referee calls a foul on him at the same time, when the game clock shows 0.0 and the red light appears around the backboard. The replay demonstrates that the contact by White 13 was all in ball and no foul should be called (legal play). However at the end of the quarter, referees can review the play in order to define if the called foul (contact) occurred before (in time) or after (time expired) the red light appears. It is a close decision, but the red light appears just before the contact occurs and the called foul should be cancelled.

Blue 19 receives the pass in the key. He turns to the basket and hits with his right elbow the defensive player Yellow 34. The action by Blue 19 is swinging an elbow (laterally), what is not a basketball action, and an Unsportsmanlike Foul (C1) should be called. Referees can also review the play in order to define what type of the foul should be assessed.

Black 25 is closely guarded by Yellow 00 at the free throw line. Black 25 moves the ball to his left side and the arm hits the face of Yellow 00. The player with the ball must be expected to be closely guarded all the time. In this case, a personal foul should be called on Black 25, his movement is a normal basketball action. Referees can also review the play in order to define what type of  foul should be assessed.

Black 7 dribbles the ball in transition and White 3 creates an illegal contact. Black 7 was moving towards White 3 who tried to make a normal basketball defense action. A personal foul should be called on White 3. The referee calls an Unsportsmanlike Foul on White 3 but decides to review the contact, and after review downgrades the foul to a personal foul. Referees can use the Instant Replay System at any time in the game to review whether a personal, unsportsmanlike or disqualifying foul met the criteria for such a foul or shall be upgraded or downgraded, or shall be considered as a technical foul. 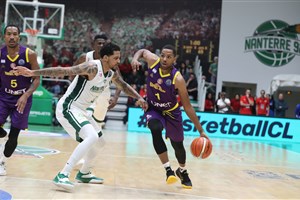 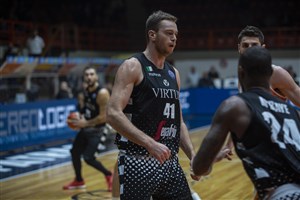