Yellow 12 makes a jump shot and Red 4 tries to block the shot. Yellow 12 extends his right leg and, at the end of the action, defensive player Red 4 is tripped by the right foot of Yellow 12 and there is no other illegal contact created by Red 4. A foul on Yellow 12 should be called (no team control foul as the ball is released when the illegal contact occurs).

Red 5 receives the ball and when he started to dribble, crashes with White 13. The player with the ball must expect to be guarded and must be prepared to stop or change his direction whenever an opponent takes an initial legal guarding position in front of him, even if this is done within a fraction of a second. The guarding (defensive) player must establish an initial legal guarding position without causing contact before taking his position. A foul should be called on Red 5.

At the end of the 2nd quarter, the White team makes a long pass from the backcourt throw-in. White 12 receives the ball and is clearly fouled by Red 7 in the act of shooting, and a foul is called on him. At the same time, the  game clocks indicates that the time has expired. Referees can review the play using the Instant Replay System to determine if the illegal contact occurred (not when the referee blows the whistle) before the red light around the board appears. The illegal contact clearly occurred before the red light appears and the called foul is therefore valid, and 2 FTs should be awarded for White 12. The game clock should be re-set for the time when the illegal contact occurred.

Blue 5 makes a jump shot and White 1 tries to block the shot. Blue 5 extends his right leg and, at the end of the action, defensive player White 1 is tripped by the right foot of Blue 5 and there is no other illegal contact created by Blue 5 before that. A foul on Blue 5 should be called. 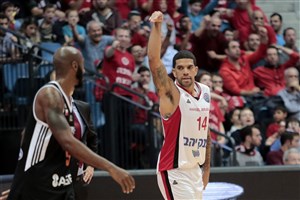 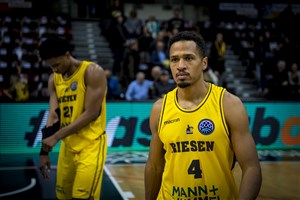