When Black 2 receives the ball his right foot is touching the floor. After that, his left (1. step), right (2. step) and left (3. step) foot again touches the floor and a travel violation should be called. A player who catches the ball while he is progressing, or upon completion of a dribble, may take two steps in coming to a stop, passing or shooting the ball,  The first step occurs when one foot or both feet touch the floor after gaining control of the ball.  The second step occurs after the first step when the other foot touches the floor or both feet touch the floor simultaneously.

Outcome: Incorrect decision  from the referees.

Yellow 12 drives to the basket and Blue 7 creates an illegal contact, what is correctly called by the referee. However, Yellow 17 has gathered the ball before the contact occurs, resulting a continuous motion in act of shooting (AOS) and 2 free throws should be awarded.

Black 2 drives to the basket and White 15 moves on the side to maintain his legal guarding position, resulting an illegal contact.

Once the defensive player has established an initial legal guarding position, he may move to guard his opponent, but he may not extend his arms, shoulders, hips or legs to prevent the dribbler from passing by him.  When judging a charge/block situation involving a player with the ball, an official shall use the following principles:

In this situation a foul should be called on Black 2.

Outcome: Correct decisions from the referees.

Yellow 9 dribbles the ball and Green 10 guards him. Yellow 9 creates a contact with his right arm what is considered to be marginal. Green 10 fakes to be fouled by having a head fake and exaggerates the impact of the contact. A warning for a “fake a foul” should be awarded.

In the end of 1st quarter, Black 1 is dribbling  the ball in the middle of the court. White 10 hits him in the back, creating an illegal contact.

It is not a legitimate attempt to directly play the ball within the spirit and intent of the rules. The official must interpret the unsportsmanlike fouls consistently throughout the game and judge only the action. Referees can also use Instant Replay System to review the play to upgrade or downgrade the foul.

Outcome: Correct decision from the referees.

Yellow 7 drives to the basket. When he is in the air, defensive player Black 25 is moving laterally under Yellow 25 when he is still in the air.

An opponent may not move into the path of a player after that player has jumped into the air, and a blocking foul should be called on Black 25. 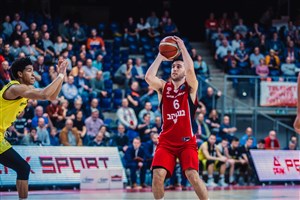 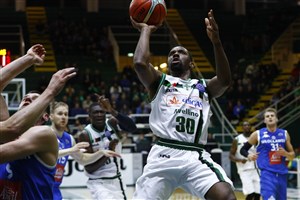