White 99 has the ball at the top of the key and his team mate, White 50, rolls to the basket after the screen. Defensive player Green 13 grabs and holds White 50 with the shirt. This is a not a legitimate attempt to directly play the ball within the spirit and intent of the rules (C1) and an Unsportsmanlike Foul should be called on Green 13 and two free throws awarded to White 50, and in addition, a throw-in for the White team at the throw-line.

Black 32 drives to the basket and Red 30 grabs and holds his left arm, which creates an illegal action by Red 30.

The nature of the action by Red 30 is an excessive, hard contact caused by a player in an effort to play the ball or an opponent, and an Unsportsmanlike Foul should be called on Red 30 and two free throws awarded to Black 32, and in addition, a throw-in for the Black team at the throw-line.

Referees can also use the Instant Replay System to review  whether a personal, unsportsmanlike or disqualifying foul met the criteria for such a foul, or shall be upgraded or downgraded, or shall be considered as a technical foul.

White 13 makes a jump shot and in the action, he moves his right leg forward.  Defensive player Black 21 is late and just passes the shooter, whose right leg creates a contact with Black 21 . The contact is considered as marginal, because it has no influence on defensive player, is created by the offensive player and no foul should be called.

Blue team has the ball and Blue 23 creates a screen on White 27 above the free throw line. Because the screen is set outside the field of vision of a stationary opponent, the screener must permit the opponent to take one normal step towards the screen without making a contact.  If the opponent is in motion, the elements of time and distance shall apply. The screener must leave enough space so that the player who is being screened is able to avoid the screen by stopping or changing direction.

The distance required is never less than one and never more than two normal steps. Therefore in this situation, a foul on Blue 23 should be called (illegal screen).

White 32 drives to the basket and Blue 6 creates an illegal contact, which is called as an Unsportsmanlike Foul.

Referees decides to use the Instant Replay System to review  whether a personal, unsportsmanlike or disqualifying foul met the criteria for such a foul or shall be upgraded or downgraded, or shall be considered as a technical foul, which is possible according to the rules.

After the review, referees decide to downgrade the initial decision to a Personal Foul on Blue 6, which is a correct decision because the illegal action by Blue 6 is a normal basketball action and not meeting the criteria of an Unsportsmanlike Foul.

Outcome: Incorrect initial decision by the referees (Unsportsmanlike Foul called), but correct decision to downgrade the foul to a Personal Foul after the review. 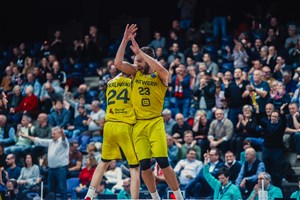 Two weeks to go in the Regular Season! Everything you need to know before Tuesday's games 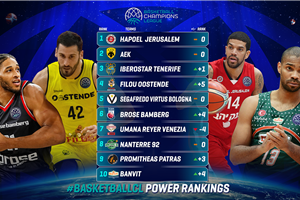