Blue 27 makes a jump shot in the corner and White 24 tries to distract the shooter by going very close to him. White 24 is not able to stop early enough and is moving under the shooter who is in the air (the point of contact is White 24 right foot).

The shooter has the right to land at another place on the playing court provided that the landing place and the direct path between the take-off and landing place is not already occupied by (an) opponent(s) at the time of take-off, which is the case in the video.

A defensive foul should be called on White 24 and 3 free throws awarded to Blue 27.

The yellow team has a semi fast break and Yellow 5 drives to the basket, while defensive player Red 5 tries to block the shot. At the end of the action, Red 5's left hand hits the head of Yellow 5, which is an illegal contact. A defensive foul on Red 5 should be called and 2 free throws awarded to Yellow 5. After the situation, a Technical Foul is called on the bench of Yellow team.

The offensive player Blue 13 gets the rebound and tries to shoot the ball to the basket. Defensive player White 12, who is behind, grabs and holds Blue 13 right shoulder when he is jumping.

This illegal contact is not a legitimate attempt to directly play the ball within the spirit and intent of the rules (C1) and an Unsportsmanlike Foul should be called on White 12, and 2 free throws awarded to Blue 13 and a throw-in for the Blue team at the front court's throw-in line.

Black 1 passes the ball in the low post and the pass is deflected. Both teams try to secure the ball when the ball moves to the back court and is touched several times by both team players. Finally, Black 14 gets the ball and is ready to make the pass to the front court again when the shot clock signal sounds.

Red 0 makes a 3-points attempt and Yellow 1 tries to block the shot. Yellow 1 illegally touches the left elbow of the shooter with his left hand and a defensive foul should be called, and 3 free throws awarded to Red 0.

Yellow 21 passes the defender Purple 12, who creates an illegal contact with his right arm and a foul is called. After the contact, Yellow 21 clearly bounces the ball off the floor and then starts the continued motion, which determines that the foul occurred before the act of shooting and a throw-in should be awarded to Yellow team. 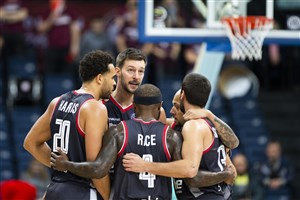 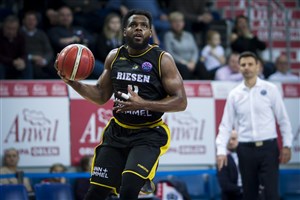