MIES (Switzerland) - There was no shortage of eye-popping performances on Gameday 4 in the Basketball Champions League.

We witnessed some breathtaking displays. Okay, you know the drill. Here is our Team of the Week. 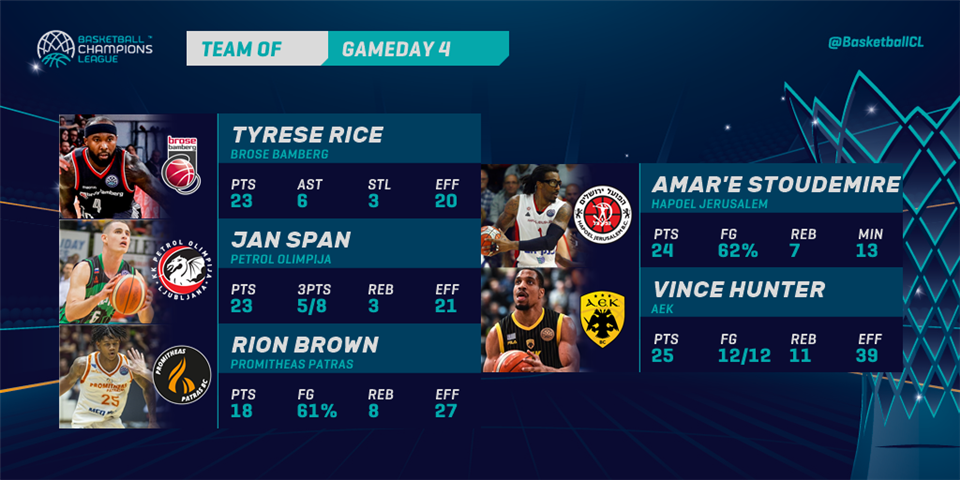 The way Rice has started this season, he could make the Team of the Week after each and every Gameday! The Brose Bamberg point guard was electric once again in leading the German side to its second victory of the season, an 82-77 triumph over upset-minded Lietkabelis. Rice hit 9 of his 18 shots from the floor, including 4 of 8 from deep, dished out 6 assists and came up with 3 steals. His fadeaway jumper off one foot over Jamar Wilson to make it 78-76 that put Bamberg in front to stay was pure class. It's the second time this season that Rice has made the Team of the Week.

Jan Span, he’s the man. If he can’t do it, nobody can! The 25-year-old guard put on a stunning shooting display, nailing 5 of 8 shots from 3-point range. All of them were highlight-reel bombs in a 79-73 win for his Petrol Olimpija side at Filou Oostende. The Ljubljana-born sharpshooter has in three Basketball Champions League appearances drilled 11 of 19 shots from deep and averaged 18.7ppg. Can you say, REVELATION?!

🎃🦉 Chills and Thrills on #BasketballCL #Halloween night! Here are the results! 🕷🕸

Turn the clock back to December 8, 2016, in Year 1 of the Basketball Champions League. What happened that night was one of the finest shooting performances anyone can remember in Finland, a 40-point explosion by Brown when he played for Kataja Basket against Maccabi Rand Media. Brown hit 9 of his 12 attempts from deep that night. Now on the books of Promitheus Patras, Brown is still wheeling and dealing. He had 18 points on 8 of 13 shooting from the floor, including 2 of 4 from behind the arc, and 8 rebounds as his Greek team won for the fourth time in a row, 80-72, over Besiktas on Wednesday night.

What kind of damage to an opponent can Stoudemire still do at the age of 35 in less than 14 minutes? Try 24 points and 7 rebounds! The 2004 Olympian of the United States hit 10 of 16 shots from the floor and 4 of 5 at the charity stripe for Hapoel Bank Yahav Jerusalem in their 105-75 beatdown of Montakit, Fuenlabrada, in Spain.

👻 It was a spooktacular night! Here are the results of Tuesday games! #BasketballCL

When Hunter makes up his mind that he's going to take over a game, you can forget about everything else. He’s going to do it! Hunter had a +39 efficiency rating after AEK’s 90-80 come-from-behind triumph at JDA Dijon on Tuesday night. He had 25 points and 11 rebounds. Maybe most impressive of all was his effort on defense, where he was a constant menace. Hunter came up with 4 steals. And for you lovers of the above-the-rim theatrics, there may be no better player in that regard this season than Hunter, a player that gets his share of rim-rattling dunks. 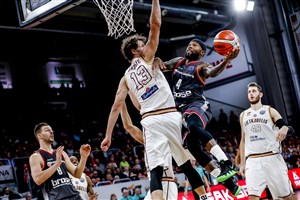 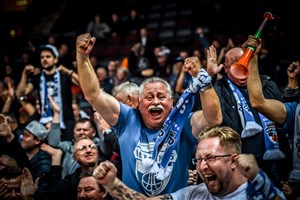