Nanterre and Nizhny advance - Round of 16 Gameday 2, Tuesday Round Up

MIES (Switzerland) - A quiet Tuesday night saw just two games played in the Round of 16, but we have our first two quarter-finalists confirmed, with Nanterre and Nizhny Novgorod advancing.

Here's a round up of the games:

Nanterre 92 advanced to the Basketball Champions League Quarter-Finals with a 62-60 win in the second leg to take a 130-119 victory on aggregate.

Besiktas had an 8-point lead early in the third quarter, but some hot outside shooting from Hugo Invernizzi and Haukur Palsson extinguished any hopes they had of maintaining their lead.

Jeremy Senglin shone for Nanterre with 16 of his 18 in the first half, Haukur Palsson joined him in double figures with 11, whilst Demetrius Treadwell had 10 rebounds with his 6 points.

"I felt like it was a hard-fighting game," Senglin reflected. "Both teams knew what we had to accomplish today. I'm proud of my team, going in with the mindset we did, and playing hard on both ends, offensively and defensively. You got to give credit to (Besiktas), they played excellent defense as well, made us take some tough shots, and we just stayed together and pulled through."

It means heartbreak once again for Besiktas, who exit in the opening round of the Play-Offs for the third year in a row, with further salt being added to the wound as they were without Robin Benzing and Jason Rich.

"Congratulations to Nanterre," Besiktas Sompo Japan Head Coach Dusko Ivanovic said after the game. "I don't have anything bad to say about my team, they fought, I think they played at 100 percent at this moment. Only, maybe, in the offense, we needed a little bit more confidence, to move the ball quicker. But we played our best at this moment."

Nanterre will await the winner of Segafredo Virtus Bologna and Le Mans' match-up to find out their final eight opponent.

Notable Number:  8 - the number of points scored in the first half by Nanterre players not named Jeremy Senglin, as his teammates combined for 4-of-24 shooting.

Nizhny Novgorod booked their spot in the Quarter-Finals with a 161-156 aggregate win over Umana Reyer Venezia, despite losing the second leg 84-66.

The hole the heavily-favoured Venezia found themselves after the opening leg 23-point deficit proved too much of a mountain to climb, despite a dominant performance at home that saw them pull to within five on aggregate down the stretch.

And in a cruel twist, Kendrick Perry - who starred in Leg 1 - was forced to depart this game with an ankle injury as Nizhny will  be praying he returns in time for the last eight.

"Great effort, great attitude," Tonut said post-game. "We have some bad luck during the game. 23 points is a huge gap, but still we fought from the start and didn't come back totally but were close. Down the stretch we were tired, they are a solid and physical team, but I think we played a great game."

Nizhny were led by an 11-of-12 effort at the free throw line from Vladimir Dragicevic on his way to 21 points, whilst Evgenii Baburin joined him in double figures with 11 points.

"It was quite an ugly game," Nizhny's Ian Hummer commented. "We knew they were going to come out hard, they pressured us...We hit the shots when we needed to, ugly game but we made the big plays when we really needed, thank god we had a 23 point lead in Leg 1, because if we hadn't have had that, we wouldn't be advancing right now."

Nizhny will play Telenet Giants Antwerp or UCAM Murcia in the next round.

Notable Number: +13 - the rebounding differential, as Venezia dominated the glass at home. 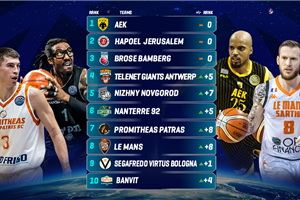 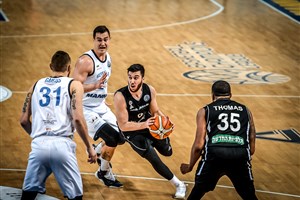