MIES (Switzerland) - The Round of 16 tipped off on Tuesday evening, with a three-game slate, but it didn't mean there was any less action.

A spectacular performance from Kendrick Perry, a big comeback in the Greek derby and a last second putback in France all gave a preview of what is in store as the Basketball Champions League heads into the post-season.

Kendrick Perry put in a spectacular performance to lead Nizhny Novgorod to a 95-72 rout of Umana Reyer Venezia.

Perry had 34 points on 12-for-20 shooting - knocking down 5 three-pointers - adding 6 assists and put on a show as Nizhny dominated the second period to take a commanding lead that they would hold on to the rest of the way.

Despite the dominant performance, Nizhny Head Coach Zoran Lukic will not let his team rest on their laurels.

"This was only the first game for us," he said. "Now we need to go to Venice to a very loud, hot, fan-filled arena, and it will be very difficult to communicate with players because of the noise. Twenty three points doesn't guarantee us anything in terms of advancing to the next round."

Anton Astapkovich went 6-of-9 from the field to add 19 points for Nizhny, Ian Hummer had 12 points, 6 rebounds and 5 assists, and Evgenii Baburin added 11.

Michael Bramos led the visitors with 17 points, whilst Mitchell Watt joined him in double figures with 13 points but second-seed Venezia have been left stunned as they will now need a 24-point win at home to advance.

"It's important to say that this is just the first half," Venezia Head Coach Walter De Raffaele reflected.

"It will be tough. I think in the third quarter we understand how we have to play, absolutely in a different way. Congratulations to Novgorod...they really deserve the game."

Notable Number: 1 - the number of times a player has scored more than 30 points whilst registering more than five assists in a Basketball Champions League Play-Offs game, as Perry becomes the first.

AEK came out ahead 84-75 on PAOK in the much-anticipated Greek derby, but there will no doubt be frustration after they gave up a 24-point advantage to take a single-digit lead into the second leg.

Antonis Koniaris had a five point burst in the final minute, including a deep, high-arching three to finish the game and pull it back to nine points.

The ever-dependable Vince Hunter led  AEK with 20 points and 12 rebounds on 10-of-12 shooting, Dusan Sakota didn't miss from the field on his way to 16 points, whilst Howard Sant-Roos had 14 and Malcolm Griffin 13. Jordan Theodore finished with 7 assists with his 8 points.

"Obviously, we are happy for the win, but this means absolutely nothing," Sakota exclaimed.

"We are sticking to our plan, our coaching staff said that this is an 80 minute game, and it's like we're going to the locker room at the end of the half, up nine."

Koniaris scored 18 to lead PAOK, Milenko Tepic had 15 and Johndre Jefferson had 12 in less than fifteen minutes.

Notable Number: 50 - the number of points AEK scored in the paint, helped by their 64.1% field goal percentage inside the arc.

Le Mans and Segafredo Virtus Bologna have set up a winner takes all affair in their second leg after finishing tied up at 74 thanks to a last second putback.

Trailing by two, Yanick Moreira rose high to tip back Kevin Punter's missed three pointer with a little over a second left and tie it up, before Kendrick Ray's potential game-winning attempt bounced off the back of the rim.

Valentin Bigote had a game and season-high 25 points, Ray had 21, whilst Cameron Clark joined them in double figures with 10 for Le Mans.

"It is disappointing tonight, because we could have taken the game," Bigote said. "We had a good comeback at the end, but you know you have to win now."

Amath M'Baye and Tony Taylor led Bologna with 13 points apiece, and Dejan Kravic had 11, as Kevin Punter was limited to 2-of-11 shooting on his way to six points.

"Our goal was to come here and make a good game to try and win or lose by a few points," Bologna's Pietro Aradori said after the game.

"But how the game was going, we were up +7, +8,  but we are not satisfied because in the last quarter we gave up an advantage that could have got the win. The situation is now we are tied, we have a game in Bologna, and our goal is always to try and win. We are in a good situation, it won't be easy but our goal is to advance to the next round."

Notable Number: 16 - the number of lead changes as the two teams went back and forth throughout. 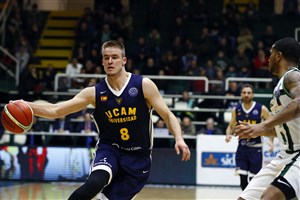 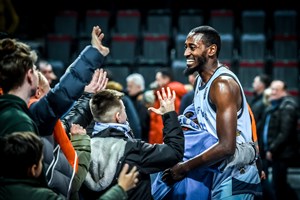