ZAGREB (Croatia) - Other than the fact that NBA once stood for National Boxing Association, which later got switched to WBA, basketball and boxing do have a thing or two in common. After all, it's easy to see how many basketball players tweet about a boxing match, or implement a piece of boxing in their strength and conditioning processes.

I've tried it a couple of times.

It's just such an exhausting sport, but trying to bob and weave against a swinging bag made my body realize that all of this is similar to basketball movement. You need strong legs and quick feet, you need a solid core to control your body and you need to keep your composure while taking a blow to the head or hands or chest or wherever - you get the point. Just like in a tough competitive basketball game, your whole body wants to die is working hard.

And following this week's game got me thinking about the way a boxing title is being won. Because we had a fine one in which Besiktas Sompo Japan won their fifth straight Basketball Champions League game, effectively taking The Hottest Team RN award from the hands of Filou Oostende - winners of six straight coming into the matchup - in a direct duel in Istanbul.

But, other than the nonexistent Hottest Team RN award, what if we had a basketball competition with a boxing system of title-holding? You know, a system in which you become a champion by beating the reigning champion? Just like Besiktas can claim the Hottest Team because they defeated the Hottest Team? Well...

After everybody had beaten everybody in all the 2016-17 games, there was one team left standing in the Pabellon Insular Santiago Martin in San Cristobal de La Laguna, Tenerife, Spain and yes, I enjoy writing out the full name, don't mind me, move along.

It was Iberostar Tenerife, taking the newly formed competition, therefore the vacant title was theirs to enjoy. But not for long...

Champ #2 Tenerife spill it at Ventspils

The very first Gameday of Season 2 saw Ventspils take over the BCL Champions' belt. It was a wild season for them, in which they completed the sweep over Tenerife (!) and the first win, 73-72, made them news of the week...but only for a week.

I imagine the imaginary BCL Champions' belt being really pointy and sharp because of the design of our logo and the actual trophy. It must have been torturing the Latvian champs, as they lost by a TKO delivered by their Baltic neighbors, Neptunas Klaipeda, 87-80, on Gameday 2 of 2017-18. And Neptunas doing Neptunas things, it did not last long for them either.

Champ #4 Riesen have risen to the top

Just a week after Neptunas were the unofficial best team ever, by beating the team who beat the best team ever a week before, they were demolished by the force of a Giant. Yes, Riesen means Giants in German, and I'm sticking with the catchy names in this Help-Side Column so bare with me.

MHP Riesen Ludwigsburg kept their title by knocking down four challengers in a row. Elan Chalon, Gaziantep, SikeliArchivi Capo d'Orlando and PAOK were all there for Ludwigsburg to warm up for the big one, against the former champion.

Champ #5 Tenerife land the belt back to the island

Iberostar Tenerife destroyed Ludwigsburg's successful run with the belt in an 83-62 win away from home on December 18, 2017. They would retain the title for another six duels, taking down Gaziantep, SikeliArchivi Capo d'Orlando, PAOK, Elan Chalon, Neptunas and UCAM Murcia once.

Champ #6 UCAM, you saw, you conquered

But UCAM strike back in the Round of 16 in 2018! The title stays in Spain with an 83-72 win over Tenerife, and two more Quarter-Final games against Pinar Karsiyaka.

Champ #7 The Queen takes the crown

Murcia's run with the belt ends at the Final Four in Athens. AEK would move on to grab another win in the Final, against AS Monaco, finishing the season as the actual champions of the Basketball Champions League, and the fictional boxing champion of the Help-Side Column.

Champ #8 Jerusalem enter with a bang

...and much like Tenerife lost their first game in their title-defense attempt, AEK have started this season with a defeat to Hapoel Bank Yahav Jerusalem, 79-75, back on October 10. Jerusalem held the belt for another week, easily jabbing left and right against Lietkabelis.

But on October 24, Telenet Giants Antwerp put up 101 points on Jerusalem, with the final score 101-89 sounding like an actual boxing card... Young champ did not last long, either.

Champ #10 CEZ Nymburk with the upset

Just a week later, Hapoel Bank Yahav were the team to beat, 88-64 over Nymburk saw them reclaim the imaginary belt, and hold it against challengers Brose Bamberg and JDA Dijon. No wonder Oded Kattache won the coach of the year fan vote last week, by getting 30.8 percent of your votes. Or, their votes, I should say:

Yep, 83-70 in Jerusalem, December 11. No wonder Luca Banchi finished second in the aforementioned coach of the year fan vote, by getting 25.3 percent of your votes.

Champ #13 Bamberg with the BAM!

AEK's first defeat in forever came against Brose Bamberg, handing them the belt. But 13 is an unlucky number, you know that, so it lasted a week.

The young guns gunned down Dijon 67-63, but their new challenger offers the biggest name. AEK will test them, and one of these two will carry the imaginary belt to the Play-Offs.

Would be fitting if AEK won, and united the titles. That's what's the biggest thing in boxing is these days, anyway. AEK as the real champions, and the owners of the prestigious Help-Side Column Boxing Logic BCL Champions' Belt. 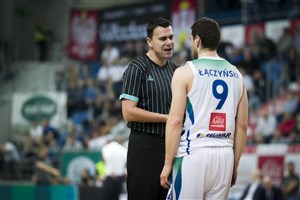